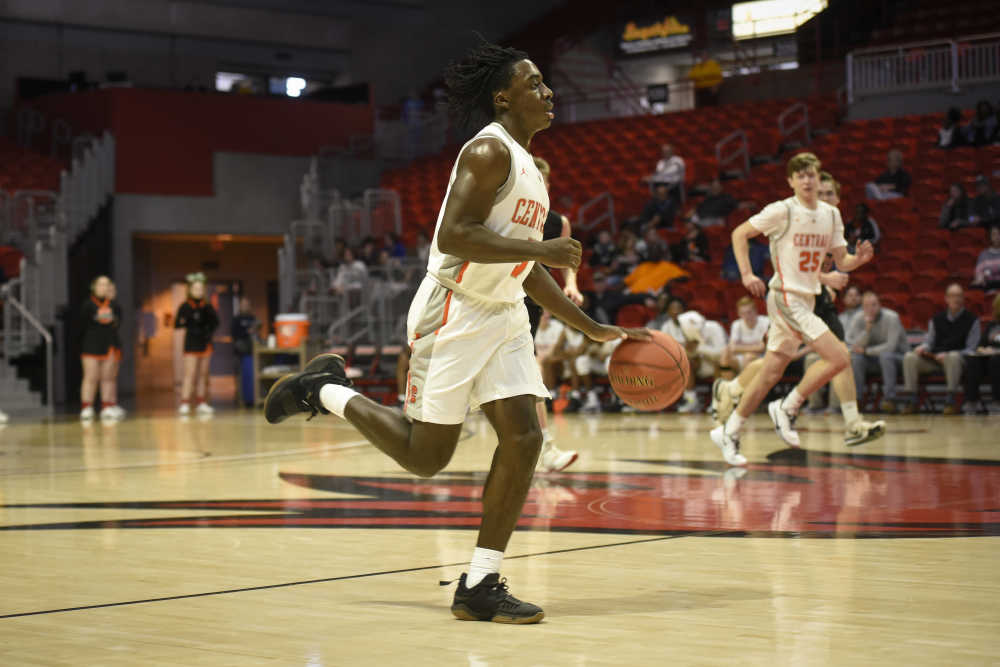 Cape Central senior Tyrus Reddin (5) brings the ball up the court during the first day of the 75th annual Southeast Missourian Christmas Tournament on Thursday at the Show Me Center in Cape Girardeau.
Ben Matthews ~ Southeast Missourian
Order this photo

If you are curious about the maturity of the Cape Girardeau Central boyĺs basketball squad, all you had to do was witness the opening quarter of its game Friday against Oak Ridge.

The Class 4 Tigers approached the Class 1 Blue Jays as if a District championship was on the line.

Cape Central opened its second-round game of the Southeast Missourian Christmas Tournament by outscoring Oak Ridge 26-16 in the first quarter en route to a 93-41 beating.

The win advances the two-time defending tournament champion to the semifinals today, where the Tigers (9-0) will face Notre Dame (8-2) at 7:30 p.m.

Church has been guiding the Tiger program for 14 years, so his expectations are well known. However, these athletes havenĺt been around for that amount of time, so it is up to them to implement the coachĺs expectations.

Several of the Cape Central players are now in much more significant roles than they were a year ago, but the foundations of the program: unselfish play and effort, never change.

The Tigers got offensive production from five different players in the opening period to accentuate those tenets that Church preaches.

Cape Central got its usual production from seniors Doreanteĺ Tucker and Tyrus Reddin, who scored 24 and 21 points, respectively, but those two also were active in finding others. In all, 11 Tigers scored in the game, including junior reserve forward Rodlandis Robinson, who totaled 15 points.

ôIt all starts with the leadership of those seniors,ö Church said. ôOur seniors communicate our expectations very well. We have two or three seniors who show (the team) what to do and if they are not doing it right, they let them know about it.ö

There wasnĺt much that wasnĺt going right for the Tigers Friday at either end of the court.

Not only were they breaking the Oak Ridge pressure with ease, but defensively, the Cape Central players followed the scout to the letter.

Church had instructed his players how to defend Blue Jay super-scorer David Layton and the senior guard was limited to a mere four points.

The athletes can absorb information even when they canĺt practice, which is the case right now.

With his team playing four games over five days, Church is having to do a lot of teaching in walk-throughs and during games. Neither poses a problem for this mature group.

ôWe can make adjustments and change things on the fly,ö Church said.

Even though Cape Central is unbeaten at this point, their play has not been perfect, according to Church. However, there is an elixir to solve any deficiencies in the Tigersĺ play.

ôOne thing is, we are going to play harder than anybody that we are playing against,ö Church said. ôThat can kind of masks some things that you donĺt do extremely well.ö