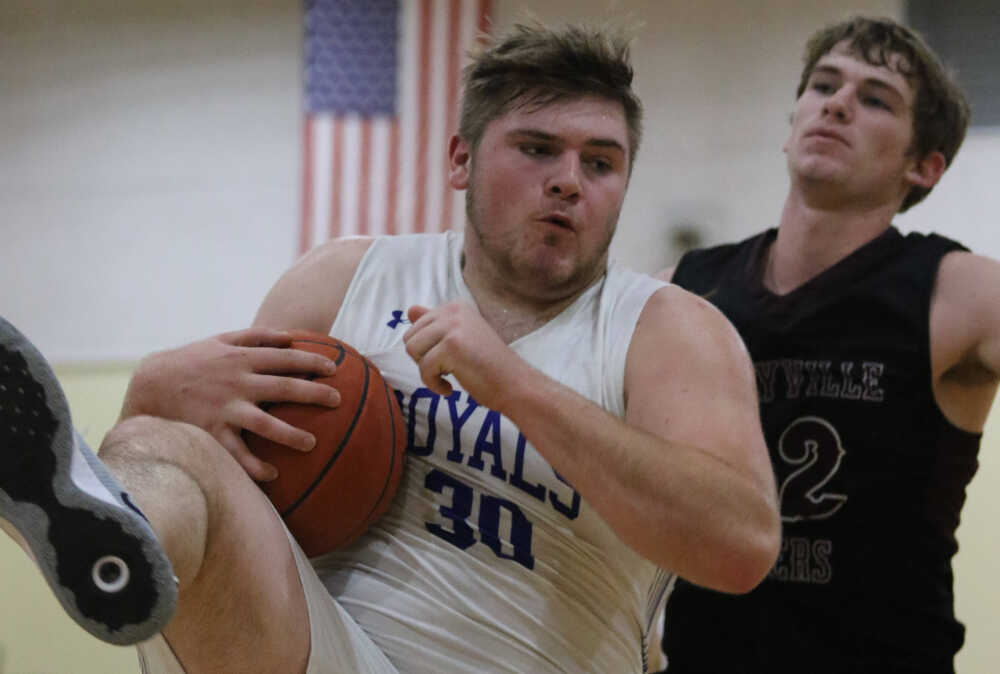 Twin Rivers' Brandon Timpkins (30) catches a lob pass in front of Neelyville's Parker Jeffries during the first half Monday night, Nov. 30, 2020, at the Campbell Invitational in Campbell, Mo.
DAR/Brian Rosener
Order this photo

CAMPBELL — Neelyville weathered the storm in the middle quarters Monday night, then held Twin Rivers at bay for much of the fourth, not giving up a point for six full minutes.

The Tigers scored eight straight points to pull ahead for good in a 51-41 win over Twin Rivers to open the Campbell Invitational.

“Honestly, we didn’t really change much,” Tigers coach Patrick Morton said. “We tried to stay in front of their bigs more but that was stuff we were trying to do all game.

“We just did a little bit better job in the second half.”

It helped being at full strength.

Neelyville senior Parker Jeffries missed most of the second quarter with foul trouble while senior Jermaane Willams-Titus was forced to the bench with four fouls in the third.

The Tigers were able to hang with Twin Rivers long enough that when the fourth quarter started they were leading.

The Royals went ahead 39-38 to open the fourth but didn’t score again until there was a minute left and they were down seven.

There were 13 lead changes before the Tigers broke the last of three ties with 4:51 to play on a drive to the basket by Jeffries, who finished with 14 points.

Williams-Titus scored 13 before fouling out while junior Ryley Cage Armes led with 16 points, 14 in the second half.

Armes had a three-point play with just under three minutes left that put Neelyville up 44-39, and finished the 8-0 run with 1:11 to go on a layin off a pass from Ethan Muse.

“Some of the shots they missed tonight I fully expect them to make as the season progresses,” Morton said. “They’re a good basketball team. We’re fortunate to get the win.”

In the other quarterfinal Monday, the host Camels beat Bloomfield 85-24.

The second half of the bracket plays Tuesday with second-seeded Bernie playing Puxico at 6:30 p.m. followed at 8 p.m. with third-seeded Risco playing Holcomb.

Bloomfield (0-1) and Twin Rivers will play at 5 p.m. Tuesday in the consolation semifinal.

“You can’t give them any easy buckets,” Morton said of the Camels. “They want to run and gun out of transition. We got to be ready to get back and try to stop that as much as possible.”

In the opening game, the host Camels scored 50 first-half points and held Bloomfield to just three field goals. Campbell forced 17 turnovers in the first half alone in taking a 50-7 lead.

“Right now offensively, we’re not hitting all cylinders that we should be,” Campbell coach Steve Fowler said. “In the past this group, we’ve shot the basketball a lot better than we are now.”

Charlie Parker and Kaden Siebert each scored 18 points to lead the Camels while Blake Fowler chipped in 15 and Skyer Morrison added 12.

Bloomfield was led by Jeffery Jarrell’s nine points and seven from Dawson Hill.

“I’ve been pleased with our effort defensively,” Coach Fowler said. “We’ve been doing a pretty good job there. We just got to continue to work on that and improve.”