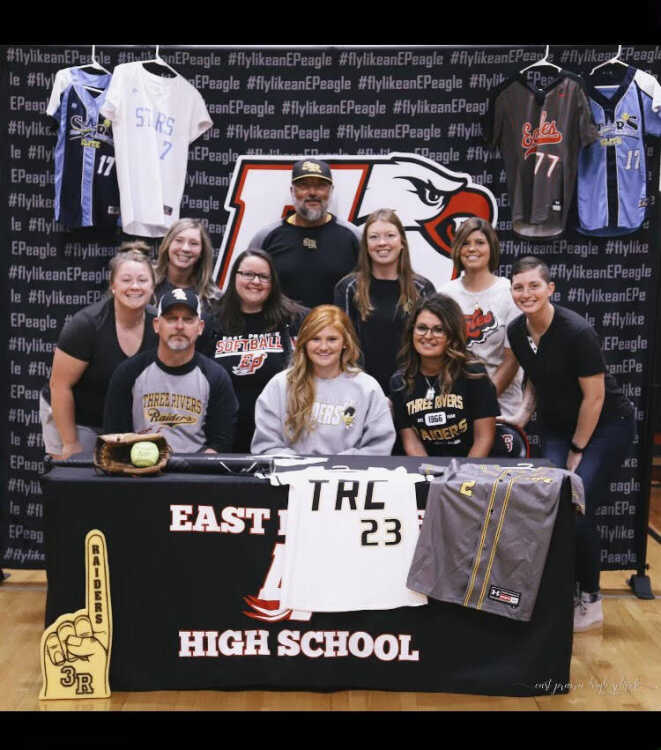 EAST PRAIRIE, Mo. — East Prairie senior Tori Stinnett signed her National Letter of Intent to continue her athletic and academic careers at Three River College during a ceremony at EPHS on Thursday, Nov. 10.

“Overall, everything thing went very well,” Stinnett said. “I was nervous at first because this was a big step, but getting to see my coaches, friends, and family there for me made me feel at home. By the end of the day, I knew I had made the right decision. I am so excited to play as a Raider.”

An important factor in Stinnett’s decision to attend Three Rivers College was its proximity to her hometown, which will give her friends and family plenty of opportunities to watch her compete at the next level.

“I have always been very close to my family, and I wanted to be able to stay close to them,” she said. “In addition, I like coach [head coach Jeff] Null, [assistant coaches] Jason Courtney, and Summer Shockley. They all were nice during my visits, responded to my emails, came to my tournaments, and seem to have tons of knowledge on the game that I can’t wait to learn.

“They have a very strong program,” Stinnett continued. “I am most looking forward to playing ball. I know most kids do not get the opportunity to continue their careers like I am. So I am very grateful and plan to work as hard as I can. Lastly, It just always felt like the right place for me. I believe that Three Rivers is where God wanted me.”

Stinnett finished her junior season with a .698 batting average with 14 doubles, four triples and four home runs. She also had 33 RBIs, 12 stolen bases and scored 30 runs.

Stinnett will most likely play in the infield for the Lady Raiders.

“I’ll play anywhere they need me,” she said. “I’m just happy to have a chance to play on the team.”

She is also a member of East Prairie’s volleyball and basketball programs.

“[Softball] has always been the sport I loved most,” Stinnett said. “I’m not entirely sure why, though, I do have some theories. The sport allowed me to bond with others, especially my dad. My dad is a lot like me and played many sports. However, knowing me so well he knew that softball was my favorite. Since then, he learned everything he could to help me get better. With this came a lot of time playing catch, hitting off the tee, and any other drills we could find. This time together made us fuss sometimes, but it also allowed us to bond. It’s his favorite sport now too.

“In addition, it has brought me many friends and great memories,” she continued. “I do love the other sports and like to remain active. However, I have just always had a bond with softball. I can still remember when I was little, maybe around the age of seven, and loved the game so much. I would beg to go outside and practice. Overall, it’s not something I can explain, it’s just where I feel at home. Often before hard practices or after tough games, my dad will ask me if I still love it. If the answer is yes, then he says we’ll keep working and playing. The answer has always been yes.”

Three Rivers competes as a member of the NJCAA in the Missouri Community College Athletic Conference and the softball team finished last season 33-15.