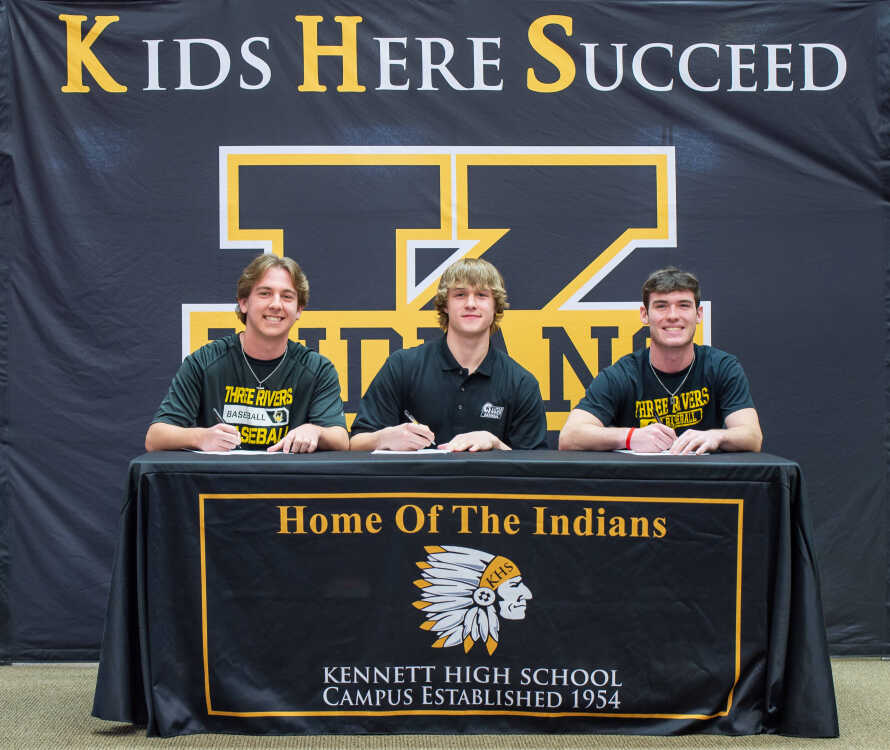 Kennett senior student-athletes Trey Gardner, Brooks Nigut and Tanner Pierce convened in the Kennett High School library Tuesday along with parents and coaches to sign letters of intent to continue their respective baseball careers and education at the college level.

“This never gets old,” Kennett baseball head coach Aaron New said. “It seems like year after year we keep having guys go off and play at the next level, and that's not by accident. These three guys have put in the work that it takes to get to that level.

Not only do you have to have athletic ability, but you also have to put the time and the hard work in,” he continued. “And that's just what these three guys have done.”

In their high school careers the three have reached the Final Four twice, both in the last two consecutive seasons. The Indians baseball team won it all in 2021, taking first place to bring home a state championship. Last year, the team took third place in the state tournament after falling to Logan-Rogersville.

One thing that all three can agree on is that this goal has been a long time coming.

“I've always loved baseball, it's kind always been my go-to thing,” Trey Gardner said. “My dad, my grandpa, everybody in my family has always played baseball.”

Gardner, committed to play for the UALR Trojans next year, is a utility player for the Indians. His introduction to the Trojans came during his summer league baseball season, during which time he frequently played in the Little Rock area.

“I've played a lot of summer games in Little Rock and I got connected with the coaches through my summer league,” Gardner said. “I kind of fell in love with the coaching staff and that field.”

His younger cousin, a class of 2024 graduate, is also committed to follow in his footsteps and looks forward to sitting where Gardner is next year. His main focus now, however, is bringing another championship home to Kennett.

“I'm just excited to compete this year,” Gardner said. “That's my main focus right now, try to get back to the Final Four and win a state championship.”

“It's meant a lot to me,” Pierce said. “It's something I can always go and do to get my mind off everything and just go play baseball.”

After visiting Three Rivers, he knew it's where he belonged.

“[Coach Tyler Smith] really showed interest in me. I went up there and the facilities are pretty much brand new, and it just felt like home. There will be a lot of guys I know and feel comfortable being around.”

And that there will be. Pierce may be making the journey alongside teammate Brooks Nigut, but the pair will also be met by Kennett alumni Tanner Duncan and Braden Tice.

Brooks Nigut knew he wanted to keep playing baseball as long as possible his freshman year of high school. He also happens to play in a summer league with Coach Smith as well.

“I'm most excited because I already know the coach pretty well,” Nigut said. “I'm going to be playing with him and his dad on a summer team this year, and I'm really excited to play there.”

Nigut has played baseball since little league after his dad introduced him to the sport. He explained that now, he's going to do whatever it takes to continue his high school success at the next level.

“Going through the processes and recruiting, and how most schools are taking juco people, I decided it would be best to take the juco route and go to Three Rivers,” Nigut said.

The triple threat find themselves in the unique situation that they won't be leaving all of their teammates behind, and they'll begin their college career with many supporters around them. 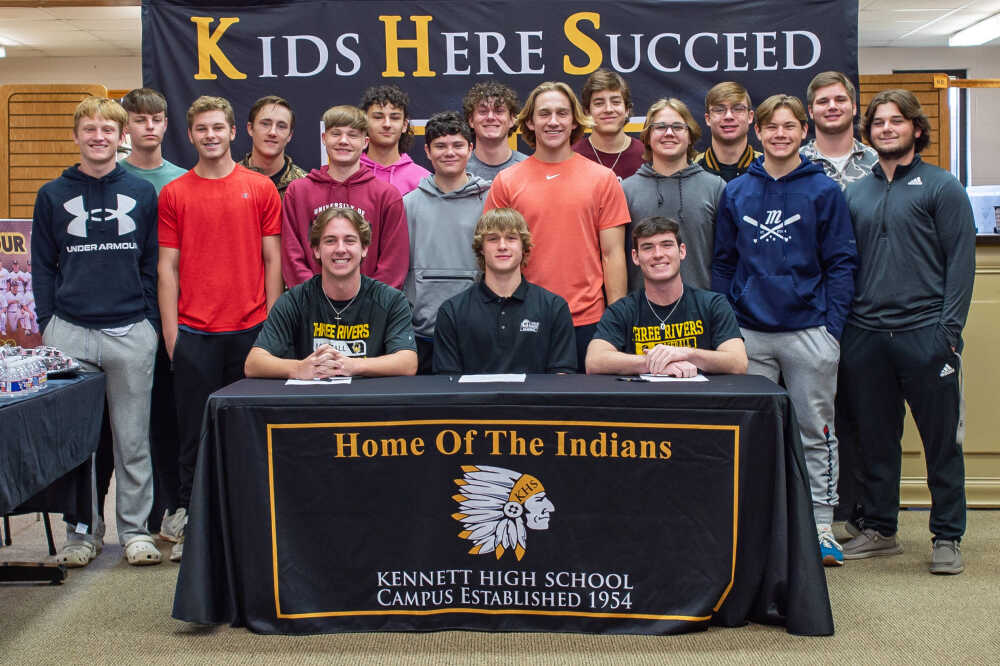 According to athletic director Jim Vaughan, the success they've achieved comes solely from the dedication and commitment that they've made to both Kennett athletics, as well as their academics. The three all maintain GPAs above 3.6 and have eyes set on returning to the Final Four this spring.