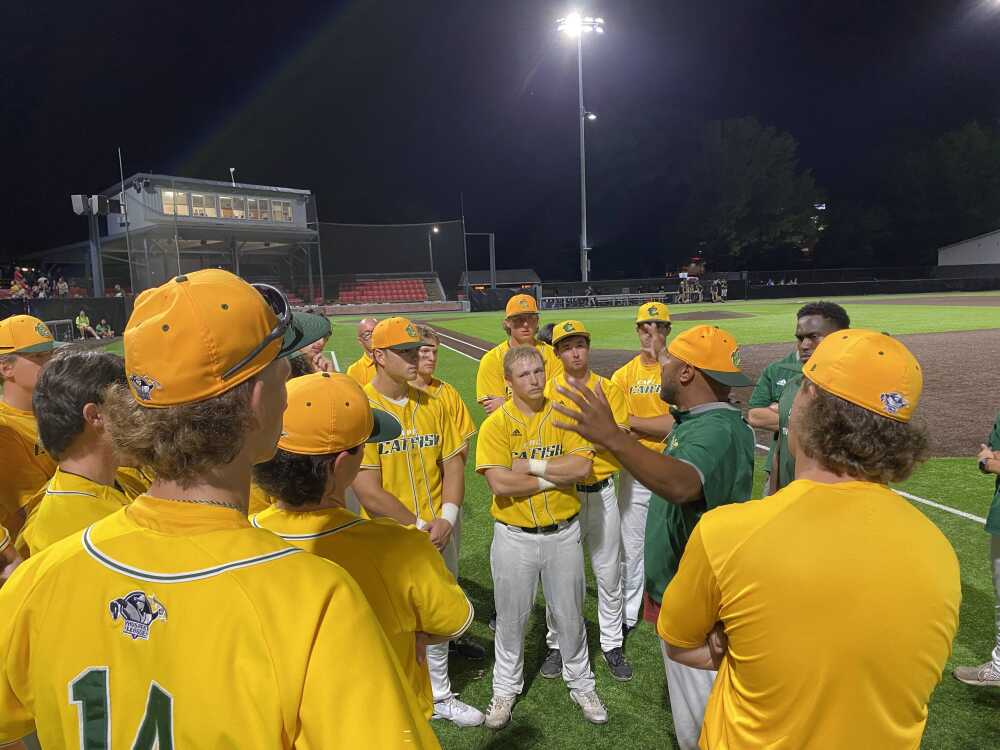 Cape Catfish manager Steve Larkin speaks with his team following its loss to O'Fallon on Saturday at Capaha Field, which ended the 2022 season.
Tom Davis ~ Tdavis@semoball.com

On July 15, the Cape Catfish fell 8-4 to the Danville Dans in Danville, Ill., which was the team’s sixth consecutive loss, and for this franchise, which has been the most successful club in the Prospect League in each of the past two seasons, it was an unfathomable moment.

“Baseball is a game of adversity,” Catfish manager Steve Larkin said following Cape’s regular-season finale on Saturday, which was a 6-4 loss to O’Fallon at Capaha Field. “We went through adversity this summer, all of us.”

The Catfish (26-33 overall, 14-14, second half) entered the weekend with their postseason fate in their own hands. However, Springfield did what it needed to do, which was win its last four games, while the Catfish dropped their final two games against the Hoots.

“We had challenge after challenge,” Larkin continued. “Guys stepped up to the challenges and dealt with their adversity. And we got better.”

A cynic would point out the last few games to Larkin, however, that would be missing the bigger picture. The Catfish were 3-6 (in the second half) following the aforementioned loss at Danville, which was after finishing dead last in the first half of the season in the Prairie Land Division.

The franchise had every excuse in the book to wave in the towel at that moment and chalk it up to bad luck, an evening of history, or whatever. After all, it's summer baseball. Just move on to next season.

“We started out so poorly,” Cape General Manager Mark Hogan said on Saturday, we could’ve had a 15-45 year. But we didn’t.”

No, the Catfish didn’t.

With nary a person outside of their dugout believing this season had any promise, Cape found SOME rhythm and won 6 of its next 10 games. The team built on that momentum and strung together four consecutive wins, climbing, eventually, into first place in the division.

Cape won 12 of its final eight games, as it pieced together a roster that battled injuries all season.

“It’s a grind,” Larkin said of a baseball season. “You have to grind every day.”

The Catfish did just that, as they had a puncher’s chance into the ninth inning of Saturday’s game. Down 5-1 in the seventh, Cape scored two runs in the seventh and added another in the eighth to fight back.

“I’m proud of (the players),” Hogan said, “because they were very competitive, particularly the last couple of weeks. Because of that, we got back in the hunt, and we had a chance to end it on our field.”

The “massive improvement” that Larkin cited will resonate this fall when Hogan starts to put together the 2023 roster.

Cape has a history of bringing productive players back for second seasons, and Hogan said there are “several guys” that he is interested in having return.

“I will say this,” Hogan said, “out of respect for this ball club, there are several guys that I will be glad to talk to this fall about coming back because of the growth and maturity that they have.”