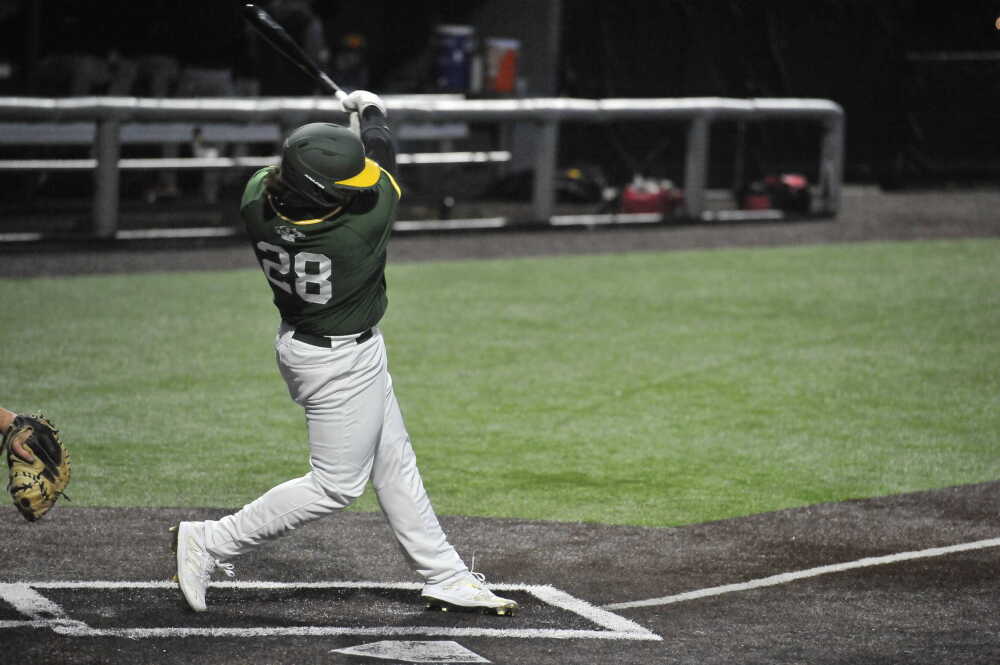 Former Notre Dame player and current Cape Catfish player, Austin Gast, swings at a pitch against the O'Fallon Hoots last season at Capaha Field. Gast has transitioned to being solely a pitcher for the remainder of the 2022 season with the team.
Tom Davis ~ Tdavis@semoball.com

As players have dropped off the Cape Catfish this summer with injuries (and there have been several), the club has had to piecemeal a roster together to some degree, as it chases one of the coveted Prospect League playoff positions in August. 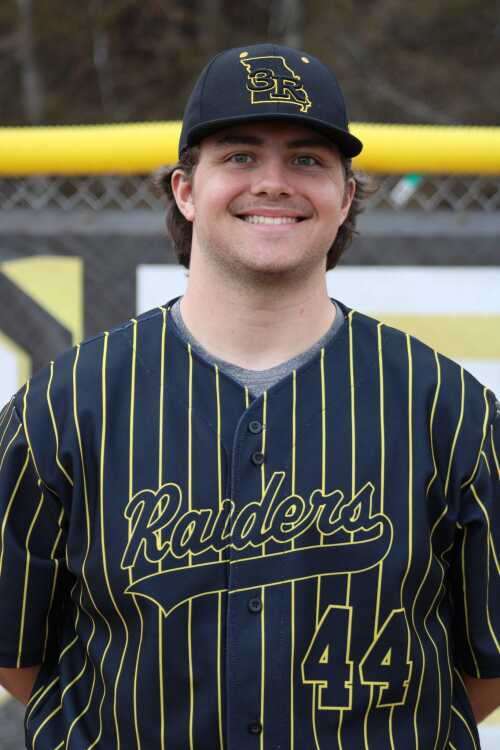 Gast worked the initial four innings and allowed just one earned run and only walked one Gem hitter.

“I thought he did well,” Catfish assistant coach Josh Meyer said following the win. “I think he would tell you that he didn’t get ahead of hitters like he normally can expect to because he is that type of pitcher. But working around some damage, he did pretty well.”

Gast threw 50 strikes in his 79 pitches, which wasn’t bad considering this is the first competitive game that he has thrown in since pitching three innings on April 23 against Mineral Area College.

He has spent the summer training individually in St. Louis, and when the Catfish called him recently, he jumped at the chance to start a second stint with the team.

Gast opened the 2021 season on a temporary contract with Cape and played as a position player. However, he is solely being used as a pitcher both this summer, as well as at Three Rivers.

Gast made it clear what his goal is through the remaining week-plus of this Prospect League season. 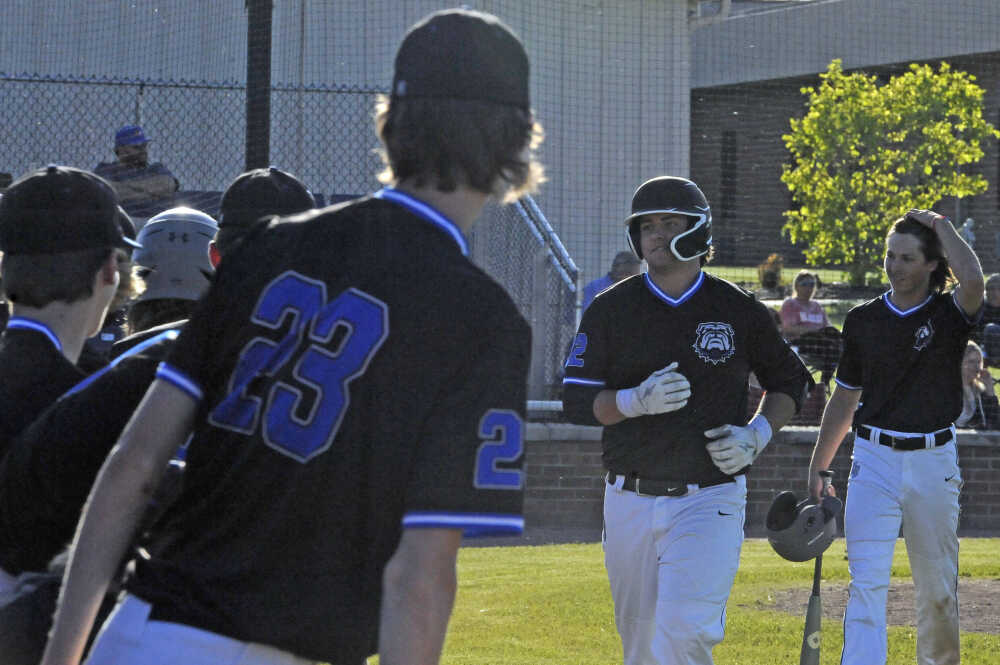 Notre Dame's Austin Gast goes yard in likely final home at-bat
J.C. Reeves - Southeast Missourian
Notre Dame senior Austin Gast made what is likely his final home at-bat count in a big way, launching a two-run home run over the left field fence en route to a 10-4 Bulldog win over Class 1 No. 7-ranked Cooter on Friday. Gast's two-run shot was his only hit of the game. The senior third baseman finished 1-for-2 on the game and was walked...

“I want to help (the Catfish) win some games,” Gast said.

He did that on Saturday and Cape has become one of the hottest teams in the league. They beat Quincy again on Sunday 10-8, which was its third consecutive win and fifth in the last six games.

Gast said he would “like to get some (four-year) college attention before I go back (to Three Rivers).”

He worked in 12 games this spring, which was his first with the Raiders, and started four of those games.

“I want to throw harder and become a more dominant figure on the mound,” Gast said of his sophomore goals. “And win more games.”

The Raiders finished 25-30 this spring and haven’t had a winning season since 2012.

“Austin had a good season at Three Rivers,” Meyer said, “and is someone that we had kept our eye on.”

The Catfish will host Springfield on Monday at 6:35 p.m. 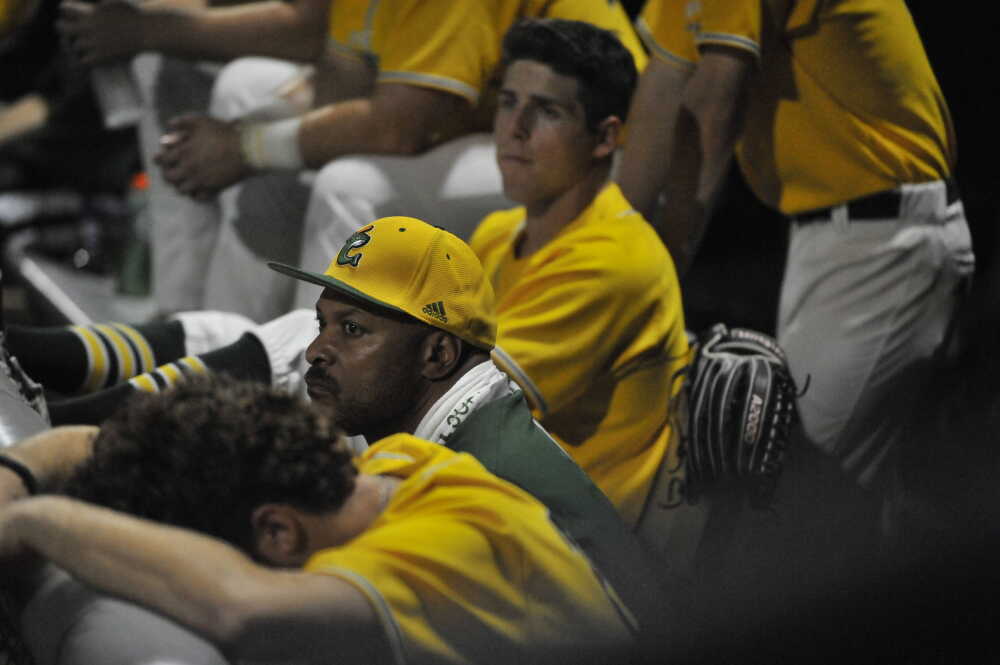 Larkin back with the Catfish, who are 'taking care of me' in wake of family loss
Tom Davis
On Saturday night, Steve Larkin was back in his comfort zone guiding his baseball team, the Cape Catfish, to a come-from-behind 7-5 win over the Quincy Gems at Capaha Field. It was Larkin's first game back in Cape Girardeau since the passing of his father, Robert Larkin, 86, on July 8 in Cincinnati, and Larkin's "first hero" wasn't far from his...
Respond to this story