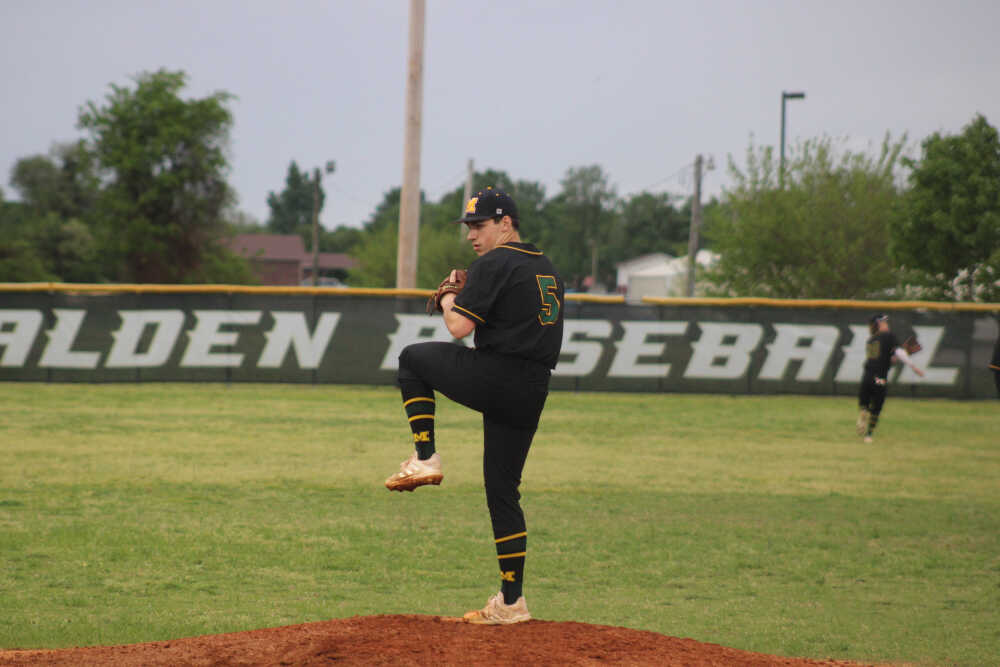 MALDEN, Mo.- The Malden Green Wave was tasked with playing the South Pemiscot Bulldogs in the conference tournament on Thursday. However, due to rain, the game was moved to Friday at Malden instead of Steele, Missouri, where the Bulldogs play.

This was the third meeting between the two teams. The first, near the beginning of the season, saw Malden win 5-2. The second game, earlier in the tournament, saw the South Pemiscot Bulldogs win 5-2. This game was different than the last, as Malden won 4-0.

This game was dominated by pitching for Malden, as senior Ethan Campbell pitched a shutout game, not allowing a single run.

"I felt great," said pitcher Ethan Campbell. "I felt like the coach called a great game and I was able to hit spots all night. I had all three pitches working and spotted them all well."

Campbell finished with 13 strikeouts in the game. He also only gave up three hits and had two hit by a pitch. The defense behind Campbell was great, as they turned several double plays and only had two errors.

"It makes me have even more confidence in my pitches, I know if I do miss my guys will pick me up," said Campbell. "Rylan Bell was at shortstop tonight for the second time ever, and he made an error early in the game but made up for it when he turned a great double play later in the game."

While the overall defense was good all-around, the offense showed up a bit too. Malden finished with four runs, by getting hits, walks, and taking advantage of defensive errors.

"We would have liked to have a few more big hits I think we stranded three runners two separate times," stressed Campbell. "But we put pressure on them on the bases and they gave us our first run. So overall very pleased."

Mason Sawyer stepped up big time on offense, as he had a run batted in against the Bulldogs. Malden also showed tremendous discipline at the plate, as South Pemiscot walked a runner in for a score.

Malden has been playing at a high level, as the Green Wave have won five of their last six games, with wins against great competition.