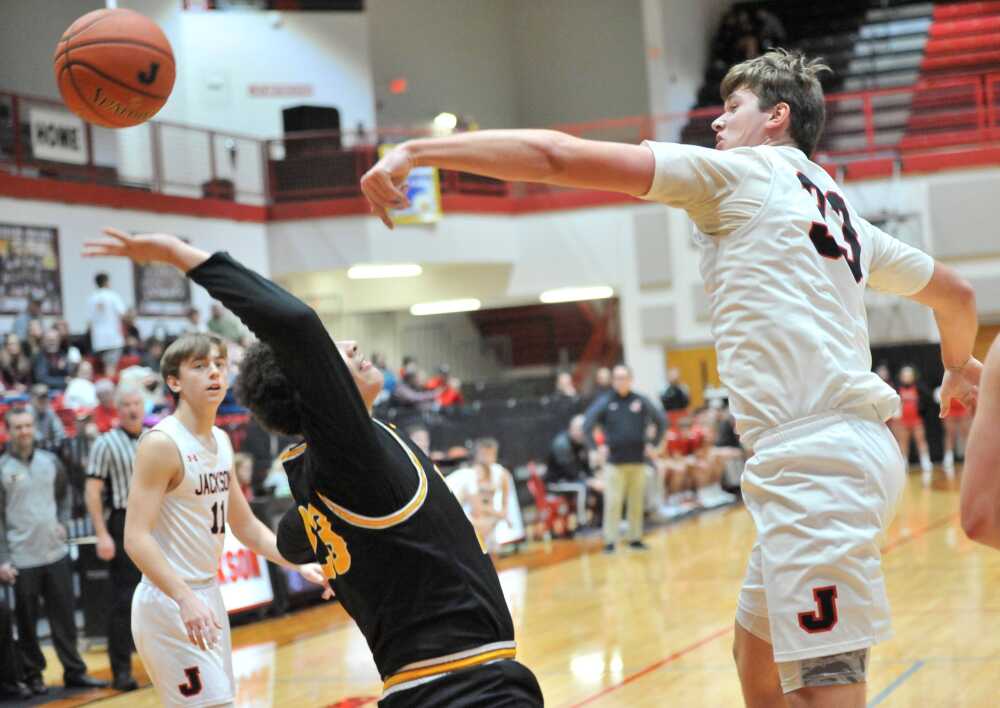 Prior to his team battling Kennett in SEMO Conference action on Friday, veteran Jackson boy’s basketball coach Darrin Scott was thinking about his team’s offensive performance of late.

“We haven’t shot the ball as well as I think we can shoot it,” Scott said.

Halfway through the game at Jackson, Scott was focused much more intensely on his team’s defense, as the underdog Indians – the ones wearing black and yellow – had surprised the crowd by playing the host Indians to a 33-33 tie.

“We were trying to take away (Kennett senior forward Ben McMullan),” Scott said of his strategy. “We wanted the other guys, who were on our heels, we wanted to make them make a lot of plays, getting to the rim, getting to the basket, and scoring.

“We had to do a better job of being active defensively and be more aggressive.”

Scott’s halftime speech must have gotten through to his team because Jackson stormed out of the locker room at the break and absolutely dominated the second half, as it won easily 77-44.

“We can’t give up 33 points,” Jackson senior guard Quinn Scott (Darrin’s son) said following the win. “We went in and talked and said that we needed to play better defense.”

Jackson (7-5) guarded Kennett (3-9) straight up, with no special strategy for the offensively-talented McMullan, in the second half, and forced Kennett coach Corbin Clark to call a timeout just 1:13 into the third quarter.

“Jackson has a lot of match-up advantages on us with their size,” Clark said. “I thought we did a decent job negating that with our zone (defense) in the first half. Two things happened in the second half, one, Jackson is a bigger team than us, and two, they are a deeper team than us.”

To Clark’s point, Jackson played nine players at some point in the opening three quarters and also had nine players eventually produce offensively.

To compound Kennett’s issues, Jackson was picking up Kennett defensively full court, which also wore the visiting Indians down.

“Their depth really kicked in in the third and fourth quarters,” Clark said. “Their pressure started bothering us. We were prepared for their pressure, but their legs held up better than ours and they ran a lot more guys in there.”

Jackson had six different players score in the third quarter, as it manhandled Kennett 22-6 and put the game away.

“We definitely have some things to work on,” Quinn Scott said of the Indians’ offense this season, “but it is definitely going the right way.”

“We were able to get the game going in our favor,” Darrin Scott said. “We made that first run (in the third quarter) and I felt like we got some confidence. We were really aggressive and got them on their heels offensively, and that is where the tables turned.”

Jackson will travel to the Lindbergh Flyer Tournament in St. Louis on Monday, while Kennett will visit Bernie on Tuesday at 7:30 p.m.