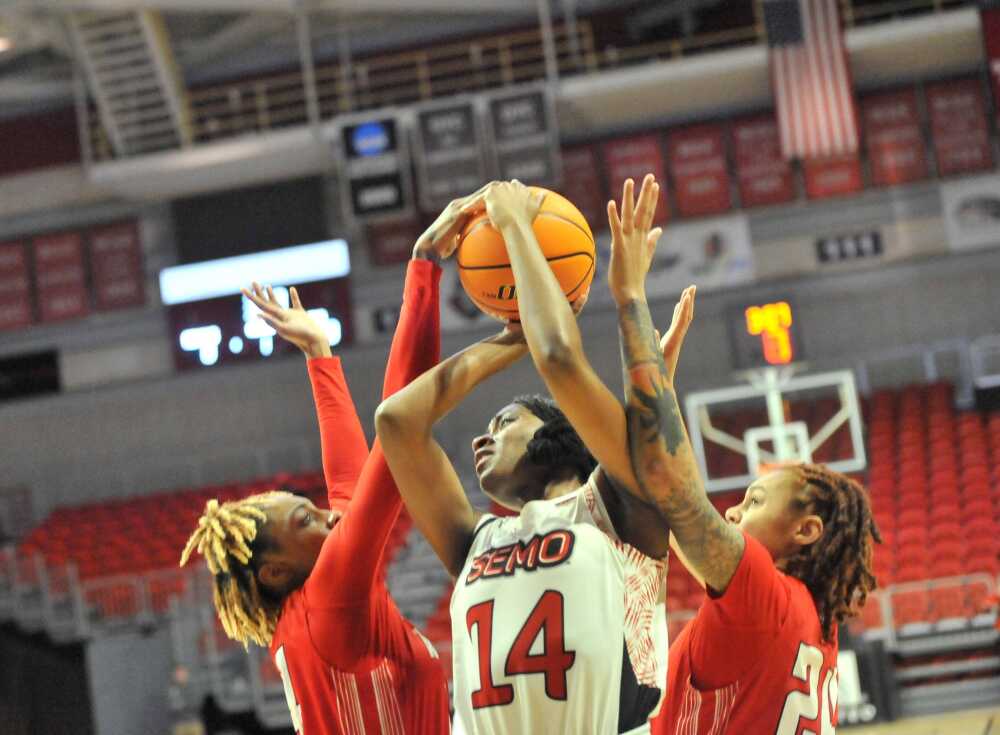 Southeast Missouri State freshman forward Kennedi Watkins puts up a shot through traffic against Austin Peay on Saturday at the Show Me Center.
Tom Davis ~ Tdavis@semoball.com

With 4:51 remaining in the second quarter of its Ohio Valley Conference women’s basketball game on Saturday with Austin Peay, Redhawk senior guard Taelour Pruittt buried a 3-pointer to pull her team to within 20-19.

Little did anyone at the Show Me Center realize at the time, that the game was moments from being decided over the ensuing 2:31.

The Governors (8-4, 1-1 OVC) tore off on a 10-0 run during that stretch and aside from a last-minute rally by SEMO (4-9, 0-2), in which it cut its deficit to as little as six, Austin Peay comfortably led throughout the remainder of the game.

What the “SEMO way” entails, according to veteran SEMO coach Rekha Patterson, is a “sense of urgency on every possession.”

“Potentially,” Patterson explained, “once we get it together, and understand how hard we have to play, I think we can defend most teams, one on one, in our league. Unfortunately, most of these kids that play, and are playing significant minutes, don’t understand how every single possession you have to play hard.”

That short burst aside, Austin Peay methodically pulled away throughout the contest, ultimately leading by 16 points (65-49) with just over four minutes remaining. The Redhawks picked the Governors up full-court late in the game, which was effective in making a rally.

“Our speed,” Patterson said, “can be an advantage for us, “but again, you have to be playing hard to create some opportunities.”

Patterson spoke of her desire to press out of free throws, however, SEMO doesn’t get to the free-throw line with any degree of frequency. The Redhawks’ opponents have nearly made more free throws (186) than SEMO has even attempted (194).

“If we can get to the free-throw line,” Patterson said, “then pressing could be an advantage.”

The Redhawks were at a disadvantage throughout the opening half, as their leading scorer, junior guard Roshala Scott, was on the bench.

“I’m just trying to get her attention,” Patterson said of Scott. “There are some things that we expect in our program. There are certain standards that we want you to meet and exceed.”

Patterson credited Scott for her vocal support of her teammates throughout the first half, and once she entered the game, Scott made an immediate impact offensively.

Watson paced the Redhawks with 16 points and grabbed six rebounds, while freshman post Halle Smith nearly had a double-double with nine points and as many boards.

Austin Peay shot 50 percent from the field against the SEMO defense, which only Southern Illinois (60 percent) and Texas (50 percent) had done against Patterson’s team this season.

“It was not the way we wanted to start the New Year,” Patterson said. “But we’ve had some growth from Thursday (a road loss at Murray State) to today. With this group of young ladies (SEMO has three returning starters, but added eight new players this season), this season is going to be about growth.”