By Ryan Mitchell- Special to the Standard Democrat 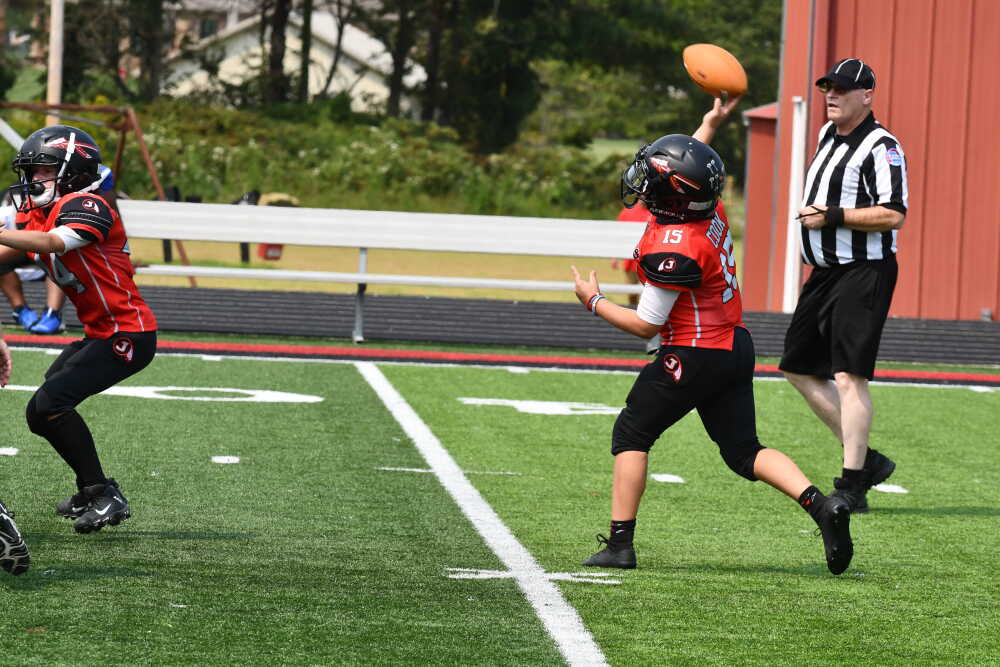 An over-flowing parking lot, RV’s, grills, lawn chairs, televisions and hundreds of fans would make one think Dexter High School was being taken over by a college football game Saturday.

In reality Charles Bland Stadium was invaded by the Heartland Youth Football League. The eight team league was initially scheduled to be playing the jamboree at Kelly High School, but a late scheduling conflict forced the move to Dexter.

The Heartland Youth Football League is comprised of teams from all over Southeast Missouri: Dexter, Cape, Jackson, Benton, Poplar Bluff, Kennett, Perryville and Charleston. Each program has a team of third and fourth graders and fifth and sixth graders.

The Heartland Youth Football League Commissioner Louis Eifert says he developed the league three years ago with the idea of playing a high school-like schedule at a young age. Safety is the top priority of the league. Not only are there weight requirements, Eifert says he doesn’t like the idea of traveling to cities like St. Louis or Kansas City to play three games on a weekend, putting the kids at more of a risk for injury. Eifert added all coaches in the Heartland Youth league coaches are required to be USA Football certified, just another added step for the kids safety.

Eifert said the Jackson Warriors come into this season as back-to-back undefeated league champions, and hope to bring home another league title this year. Eifert said their efforts do not go unnoticed at the next level.

“I sat down with Jackson Indians head coach Brent Eckley, and got his input on how he wants us to run our team, what he wants us to install offensively and defensively,” Eifert said. “He (Eckley) gives us the fundamentals that he expects these kids to know coming into the high school program”.

Jackson Warriors head coach Kyle Thompson said, “One of the goals of this league is to develop kids to compete at the high school level. We are developing kids from all over the area, hoping to bring more State Titles to Southeast Missouri.”

O.J. Turner, former Southeast Redhawks player and head coach of the Cape Jr. Tigers said like Eifert, he stresses the importance of teaching the athletes the fundamentals and keeping everyone safe.

Turner says his program is a feeder program for Cape Central High School.

“We met all of the high school coaches and got a playbook from them,” Turner said. “We run Cape Central’s offense, so when these kids make it into the 7th grade program they will be prepared.”

The Heartland Youth Football League will begin play Saturday. Teams will play a six-week regular schedule and conclude with a championship game for week 7.