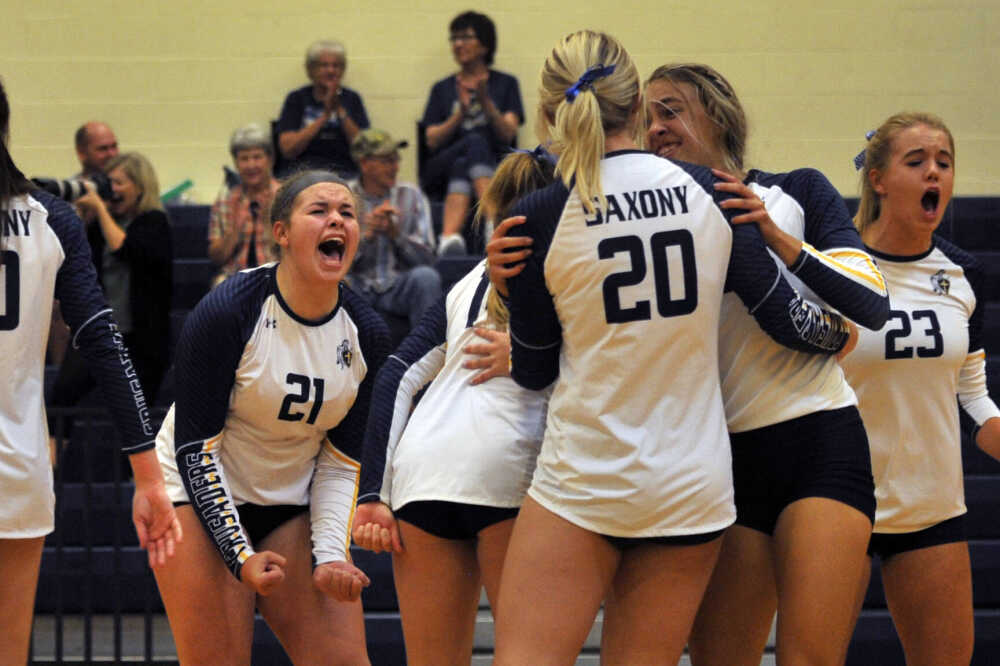 The Saxony Lutheran Crusaders found themselves in familiar territory during Thursday night’s volleyball match against Sikeston.

Saxony had taken a 2-0 lead, but allowed the Bulldogs to claw back to tie the contest 2-2. The Crusaders faced a similar situation Tuesday in an eventual 3-2 loss to St. Vincent.

This time around coach Emily Wahlers’ Crusaders were ready, as Saxony came out motivated in the fifth set, handily defeating Sikeston 15-3 to claim a 3-2 victory.

“It’s great to see them fight back in the fifth set like they did,” Wahlers said. “We were determined not to lose, because of Tuesday night. When you get that momentum of the first two, sometimes you start to relax. We had done that and we did it again. Last time we did not fight back and this time we did, and it made a huge difference.”

Wahlers credited her players for stepping up and motivating themselves before the final set.

“They were the ones doing most of the talking,” Wahlers said. “I just told them where we needed to hit and what we needed to focus in on getting our passes to our setter.

Saxony was led by junior Josey Wahlers who recorded a team-high 13 kills against the Bulldogs.

“She’s just smart,” Wahlers said. “Usually if she can see a hole she’ll put it in it, whether its a hard hit or a tip. But she just tries to be smart with it.”

The Crusaders put up solid serving numbers, with sophomore Grace Ozark leading the team with five aces and sophomore Landre Hoehne and Josey Wahlers tying for second with four apiece. In all, Saxony recorded 17 service points against the Bulldogs.

“They’re a great team,” Wahlers said of the Bulldogs. “They’re very smart, they’re hitting holes now and it was a great game.”

Although the Crusaders picked up the victory on Thursday, Wahlers is not totally content with her team’s performance especially with senior Lauren Barnes — who led the team in kills last season — recovering from injury.

“We’ve got a couple of them who need to just not get down when they make mistakes,” Wahlers said. “We’re missing our main senior hitter (Lauren Barnes). She’s been our leader and she’s out for right now. I need someone else to step up there and be that leader on the team. We don’t have one yet. I think I do, but I’m not sure. We’re taking steps to find that leader who’s going to lead us to those points and we’ll go from there.”

Saxony Lutheran (3-2) and Sikeston (0-3) will both compete in the Dig For Life Tournament over the weekend in Cape Girardeau, Mo., and Wahlers has high expectations for the Crusaders in the tournament.