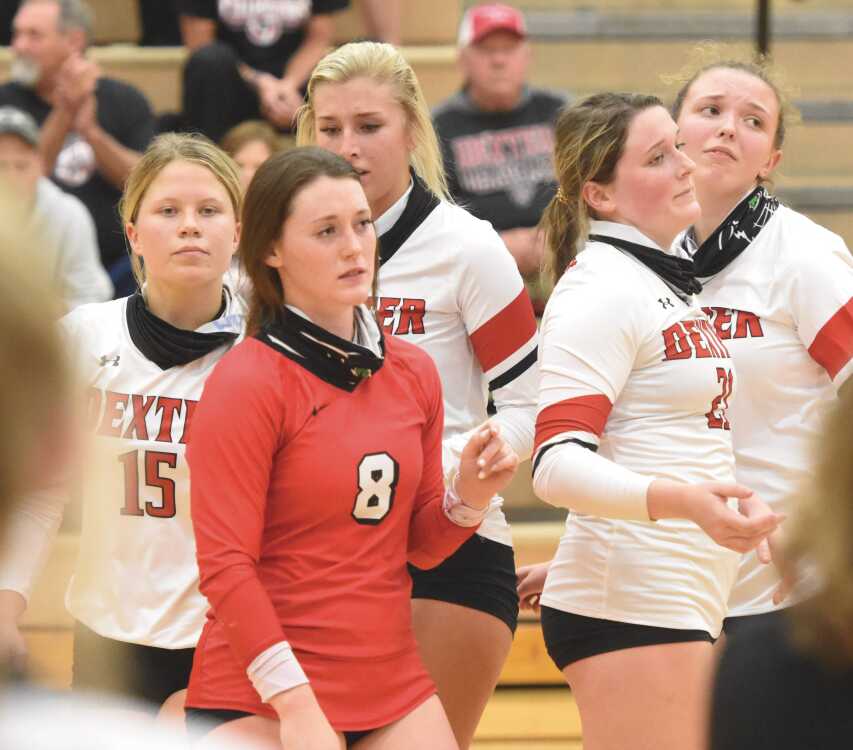 EDITOR'S NOTE: The Dexter Statesman is counting down the 10 best high school games from the 2020-21 school year. The Dexter volleyball team's run to the state quarterfinals comes in at No. 4 this week. The criteria for a game to make the list include competitiveness and meaning of the game. A game must involve a team(s) from Stoddard County and must have been covered first-hand by the Statesman or Semoball.com.

OWENSVILLE — Dexter’s five seniors didn’t go down without a fight.

“After losing two sets in a row, they showed a lot of heart,” Dexter coach Starla Pulley said. “I couldn’t be more proud of the effort they gave. We fell short just a little in the end but they gave a valiant effort. Park Hills is a great team.”

After fighting back to tie the match at two sets apiece, the Bearcats built a 5-2 lead to start the fifth game and didn’t trail until Central took a 10-9 advantage on a passing error by Dexter.

Chamberlain’s kill tied the score at 10 before Liberty Coleman’s kill gave the Rebels an 11-10 advantage.

The Bearcats tied the score once more on a hitting error by Central, but Central took the lead for good on a miscue by the Bearcats. Kaley Kimball followed with one of her two blocks and another error by Dexter gave Central match point.

Thurmon’s kill staved off elimination, but the Rebels closed out the win on a kill by Kimball.

The Bearcats showed a growing confidence over the final three sets.

“They believed … they could do it,” Pulley said. “It’s one of those things where a few points here and there … but you can’t overlook the effort and the heart and the teamwork that they (showed).”

The Rebels played an efficient match, committing only 16 errors, including just one in the final set. Dexter committed 37 with 22 occurring in the first two sets.

“I think we were a little nervous. We played a little tight,” Pulley said of the opening two games. “The third and fourth sets … they came out hammering the ball and blocking a lot better.”

The Rebels scored the first four points of the first set and never trailed. Dexter sliced its deficit to one (12-11) on a kill by Dulcie Pullen, but they responded with an 8-1 run to take a commanding 20-12 lead. Coleman produced two kills and Dexter committed four errors during that stretch.

Another kill by Coleman clinched the first-game victory.

Despite winning the first set by eight points, the Rebels only held a two-kill advantage (14-12). Overall, Dexter finished with a 68-58 lead in kills.

Chamberlain paced the Bearcats with 24 kills, Thurmon had 19 and Pullen had 13.

Coleman led Central with 20 kills, Kimball had 19 and Lizibeth Marler had 11.

The Bearcats scored the first two points of the second set for their first lead of the match, but Central took a 6-5 advantage on a passing error by Dexter and never trailed again.

Dexter tied the score three more times before the Rebels took the lead for good (9-8) on a hitting error by Dexter. They extended the lead to five behind a 5-0 rally that featured on a kill and a block by Kimball and three Dexter errors.

The Bearcats committed 13 errors in the second game.

Dexter used a 6-2 run to slice its deficit to 20-19 on one of five blocks by Chamberlain, but the Rebels closed out the set with a 5-1 run.

The Bearcats made only four errors in a third set that featured six lead changes. They took the lead for good (15-14) on one of three service aces by Thurmon, as part of a 6-0 rally, which featured three kills by Chamberlain.

Another ace by Thurmon capped the rally, giving the Bearcats a 19-14 lead.

Central scored four of the next five points to close within 20-18 on one of three blocks by Alexandra Kelly.

The Bearcats wrapped up the set with a 5-1 run that featured a block and a kill by Carly Long on set point.

Dexter never trailed in the fourth set, although the score was tied four times, the latest tie occurring at 15.

Chamberlain followed with two kills, sparking a 6-1 run to give Dexter a 21-16 lead. She had three kills during the rally.

The Bearcats finished the season with a 21-7 record, thanks in large part to the senior class.