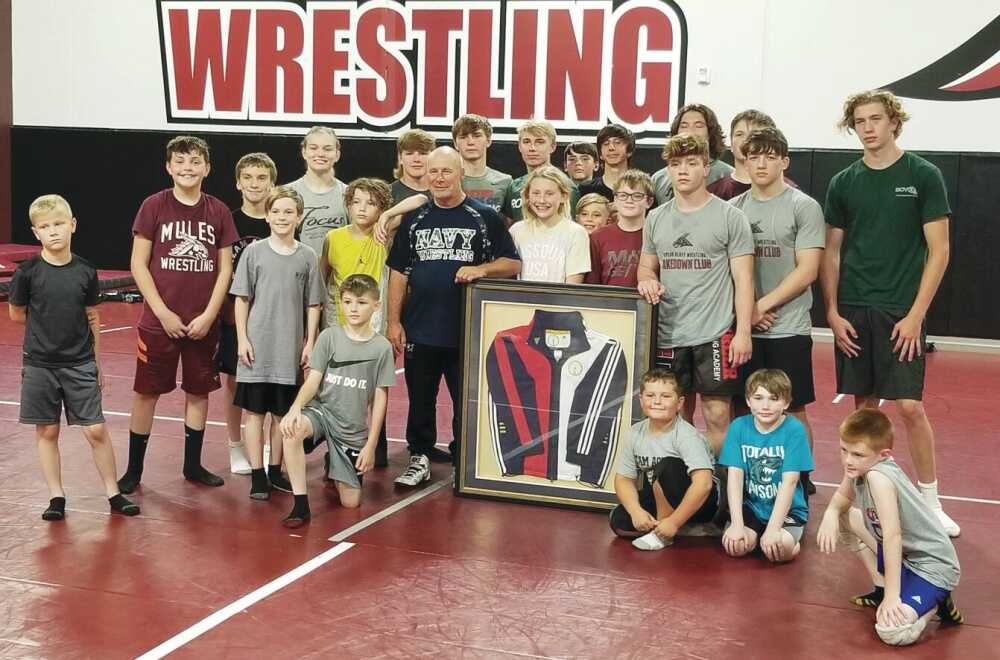 When America’s Rulon Gardner won gold at the 2000 Olympics by upsetting Russia’s Aleksandr Karelin, a man who hadn’t lost in international competition in 13 years, Rob Hermann was on the sidelines as an assistant coach for the United States.

The framed jacket Hermann wore during those Olympics will spend the next year hanging in the Poplar Bluff High School wrestling room.

“That’s pretty cool,” said Gatlin Taylor, a two-time state qualifier who finished with a 37-5 record this past season as a junior. “We’ll always look at it when we walk in the door. It’ll be pretty cool to remember that he came here and he’s the Olympic coach and all the things he did for Team USA.”

Hermann has been friends with Poplar Bluff assistant coach Dan Beckwith for about 20 years. Beckwith asked if Hermann, who retired from coaching a couple of years ago, would make a special trip to Poplar Bluff and coach a youth clinic.

Among his many accolades, Hermann won the bronze medal at the 1983 Pan American Games and placed second in the 1984 World Cup. He was named USA Wrestling Greco-Roman Coach of the Year in both 1992 and 1996, in addition to numerous coaching roles at the international level.

For 5 1/2 hours Monday, he lent that expertise to nearly 30 wrestlers of various ages at the high school.

“I liked it a lot. It was probably one of the best camps I’ve ever gone to,” said Taylor, adding he will try to take what he learned into his senior season. “He’s a nice guy, showed us different stuff. Good takedowns that will help me in wrestling this year.”

Hermann focused primarily on folk style, most common at the high school and college level.

“I try to mix it up with some upper body tactics, arm throws and headlocks. I tried to keep it moving with speed drills, strength drills, sprawling drills, then we’ll throw some wrestling games in there to make it fun,” he said. “It’s a long day, and you’ve got to keep their attention span.”

If the kids start fading, Hermann will switch to a wrestling game, then back to some more technique. If they start fading again, he’ll go back to another game as he manages the day.

“They were good today for the most part, and I think they got a lot out of it,” Hermann said.

Added assistant coach Brian Taylor, “When you have any kind of Olympian get to coach you and help you, it makes for a nice day.”