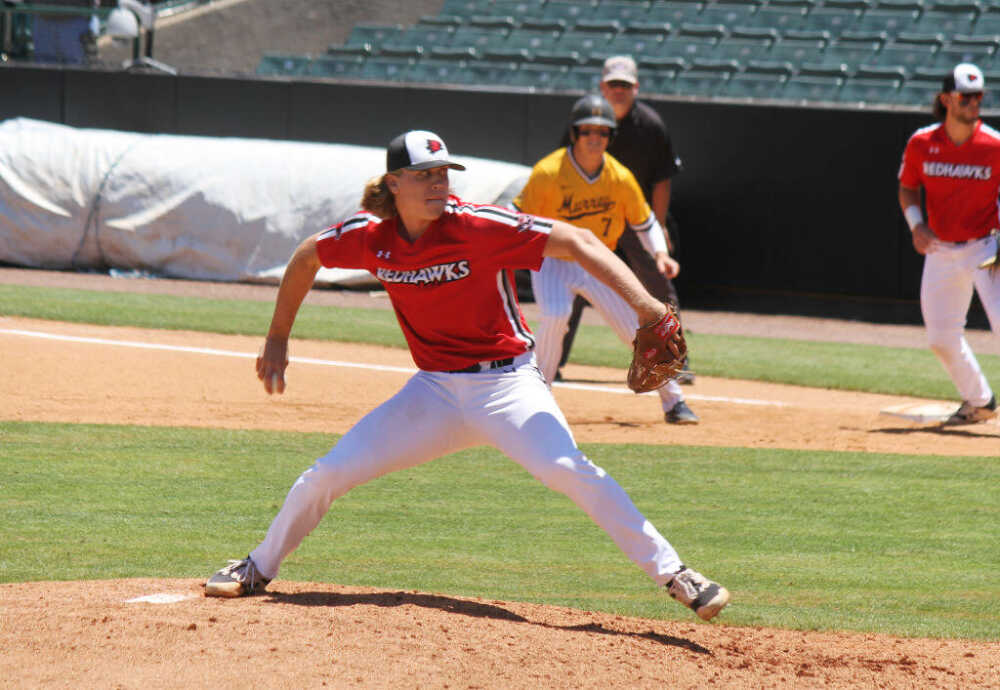 This is why gambling on sports is so difficult to do successfully.

After three days of the Ohio Valley Conference Baseball Tournament in Jackson, Tenn., it was clear that the Southeast Missouri State starting pitching was struggling.

What was also obvious was that Murray State had little difficulty producing offense against the Redhawk pitching staff.

In five games this season, the Racers had totaled 37 runs on 56 hits. The most recent of which was a 10-1 thrashing of SEMO on Saturday afternoon.

So naturally, with the OVC Tournament championship (and a berth in the NCAA Tournament) riding on Sunday’s match-up, a Redhawk starting pitcher… who is a true freshman… who hadn’t thrown more than four innings in two-plus months… limited Murray State to two hits and one run over nine innings.

The Redhawks turned the tables entirely on the Racers in 24 hours and smoked their rival 10-1 to add the tournament championship to their 2021 OVC regular-season title.

The win is the fourth NCAA Tournament berth in SEMO history and the first since 2016.

“The measure of a man is when he has adversity,” SEMO coach Andy Sawyers said in a postgame interview. “You can’t tell what kind of a person or a team somebody is when things are going great.” 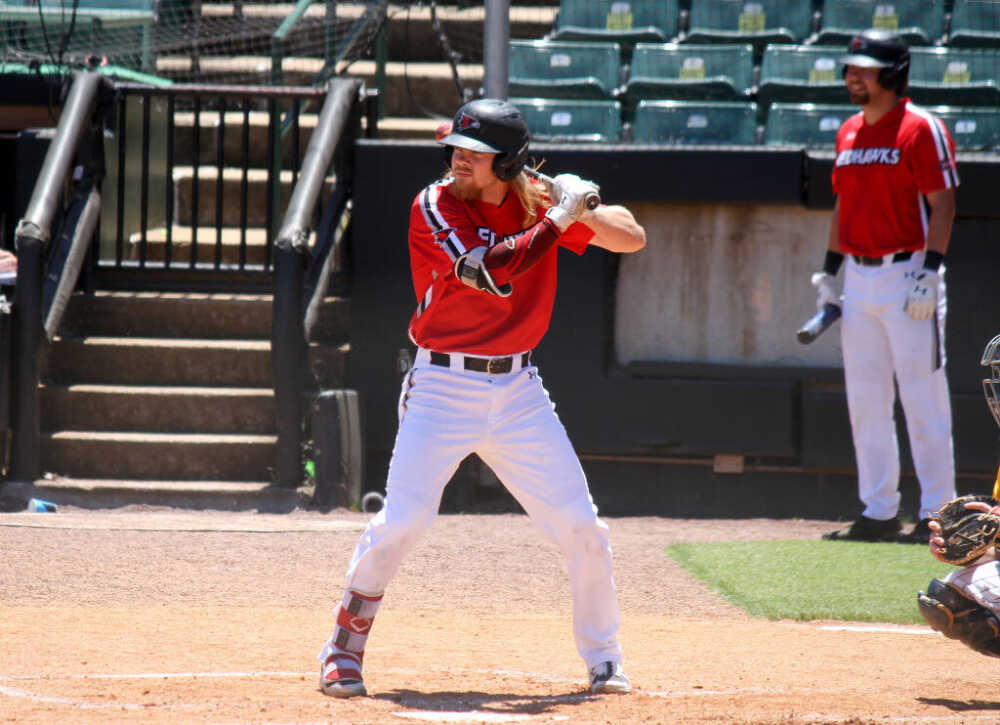 Things hadn’t gone “great” for the Redhawks (30-20) since they arrived in Jackson for the tournament.

SEMO star (and OVC Pitcher of the Year) Dylan Dodd got lit up for nine hits and six earned runs to open the tournament. However, the SEMO offense was timely and productive enough in the opening two games for the Redhawks to survive and advance.

With the title on the line Saturday, Sawyers said his team played “nervous and timid,” as the Racers (33-25) rolled through it.

On Sunday, Sawyers turned to freshman right-hander Kyle Miller, who hadn’t started a game since March 20, and what the Eureka High School graduate did was “storybook,” according to his coach.

Miller shut down the most powerful offensive team in the OVC (Murray State led the league in hits, doubles, triples, home runs, and runs scored).

“I’ve kind of run out of adjectives to talk about Kyle Miller,” Sawyers said. “For a true freshman to go out there and go (a complete game) against the most powerful lineup there is, for him to shut them down like he did, that is a storybook outing. He’s going to remember that outing for the rest of his life.”

A lot of SEMO followers will.

Through six innings, Murray State had managed one base runner and that was due to a Redhawk fielding error. By that time, SEMO held a 10-0 lead.

Murray got a leadoff triple, followed by a double (which scored a run) in the seventh, but Miller quickly regained command of the game and got the next two hitters out.

His focus was indicative of the entire SEMO team.

“This team has responded all year,” Sawyers said. “Whenever we’ve had a bad game, a bad go, they’ve always responded.”

Miller finished with having allowed two hits and one earned run while walking one and striking out 10 in nine innings.

It was the only nine-inning complete game thrown by a SEMO pitcher all season.

Offensively, the Redhawks scored three runs in the second inning, two in the third, and five in the fourth.

Connor Basler brought home Wade Stauss for the first run after Stauss had reached by getting hit by a pitch.

A double-steal put Redhawk runners on second and third and Tyler Wilber brought Stauss and Peyton Leeper home for a 3-0 margin.

Danny Sperling connected for his only home run of the season, which scored two runs in the third before the Redhawks exploded for five runs on four hits in the fourth.

Jevon Mason (one run), Wilber (one run, two RBI, three walks), and Sperling (one run, four RBI) led SEMO with a couple of hits each.

SEMO is one of 64 teams that will play in the NCAA Tournament. The selection of teams will be Monday at 11 a.m. on ESPN2.

“This is a team filled with young men with great character,” Sawyers said, “and great toughness and they responded for us again today.”

THAT, you can bet on. 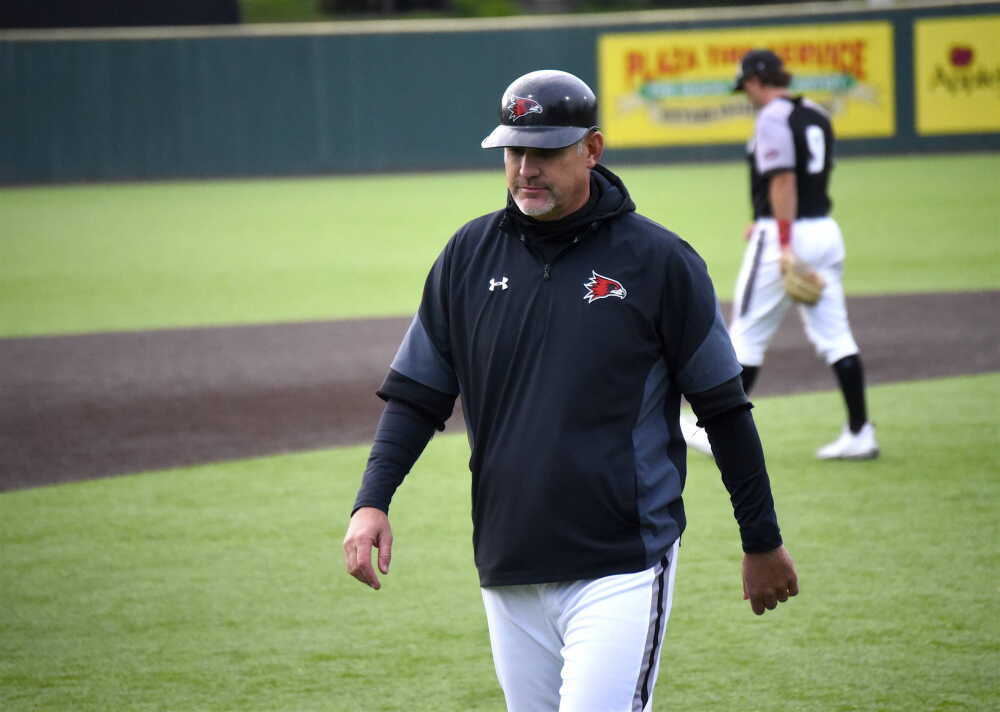 SEMO baseball 'fails test,' but remains alive for one more day
Tom Davis
The bad news for the Southeast Missouri State baseball team is that it "played one of the more poor games" it had experienced during the 2021 season with the Ohio Valley Conference Tournament championship on the line on Saturday.
The positive is that the Redhawks season remains alive.
Comments
View 1 comment
Note: The nature of the Internet makes it impractical for our staff to review every comment. Please note that those who post comments on this website may do so using a screen name, which may or may not reflect a website user's actual name. Readers should be careful not to assign comments to real people who may have names similar to screen names. Refrain from obscenity in your comments, and to keep discussions civil, don't say anything in a way your grandmother would be ashamed to read.
Respond to this story