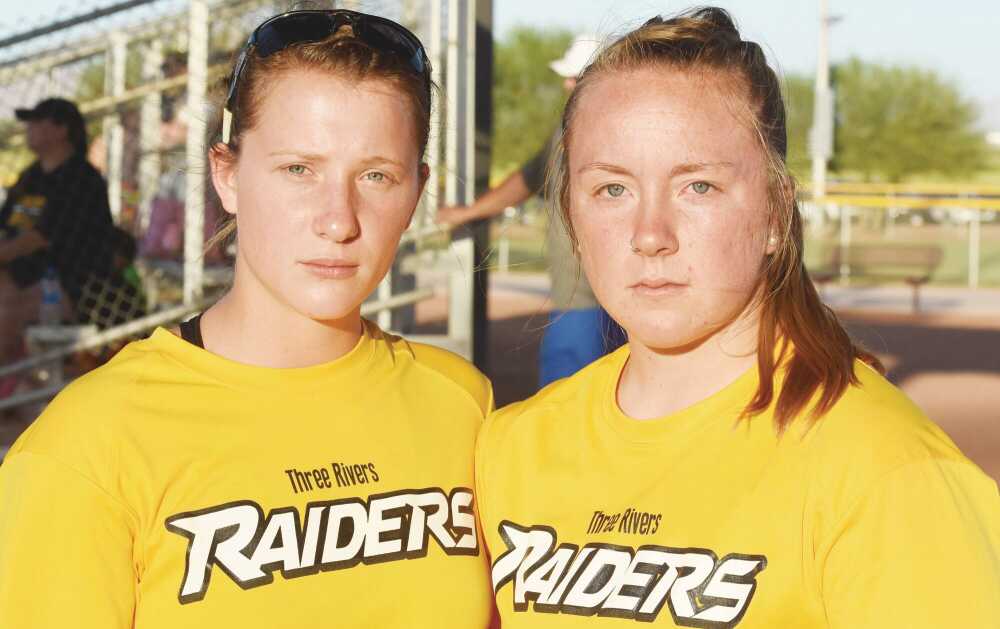 YUMA, Ariz. — When the COVID-19 pandemic ended Three Rivers’ 2020 season after just 13 games, it potentially meant the end of the careers for Three Rivers’ eight sophomores.

“Having the season cut short was very sad. I cried a lot, and it took everything to get here, and I’m glad we are,” Jenny Morey said.

All players were granted a redshirt season for 2020, meaning those eight sophomores could come back for a third season. Not all were given the opportunity.

“We had to make some tough decisions,” Three Rivers coach Jeff Null said. “There were some other kids who wanted to come back for their third year, as well. You have to look at what you have coming in, what you need, are they the right fit for the group you have coming in.”

In the end, Morey and Zoe Bisby were the only two who returned.

“Jenny and Zoe are two of our hardest workers. That’s what you want to build your program around,” Null said. “I thought they would both be excellent leaders. First off, by work ethic alone; secondly, they do the right thing off the field. They are everything you want in a student-athlete. Those were two easy choices. We were just fortunate to get them for a third year.”

Many thought Three Rivers was good enough to reach the national tournament last year. For Bisby, ending on a high note was important. So far, the music is playing with Bisby winning the home run derby on Monday. She hit 44 home runs in three rounds, including 14 in 90 seconds in the final round. In high school, she had 11. Null likes to mention that Bisby hit one home run during the summer before her freshman year at Three Rivers.

“She’s in the weight room all the time. She’s working on her game all the time. She’s up there hitting extra all the time,” Null said. “We had no idea she would bloom and blossom as she has. You don’t know their work ethic and their true colors until you get them here, and she is one who bought in.”

Morey was more pragmatic about coming back.

“Initially, it was for the money, but now I’m glad I did because these girls are the best,” she said, adding that this season’s success and the friendships made have been fulfilling.

While the slap-hitter’s stats have been consistent throughout her college career, Null said Morey’s biggest improvement has been between the ears.

“Jenny’s biggest improvement has been mentally, just growing up. She’s 21 now and not 18,” Null said. “It’s all how you bounce back. And I think those third-year kids have learned how to handle that. Just another example of how they can lead the younger kids on how you are supposed to handle those situations.”

Added Morey, “My mentality is different. I know what I need to do. Some girls don’t realize that if a rise ball starts high, it’s going to go high. So I’ve learned to lay off it, and some don’t have the experience.”

The two were also the only people on the roster coming into the 2021 season who played in a Region XVI game. Coaches at Three Rivers consistently speak about the increased intensity of those games, and you never really know how the freshmen will respond until it happens.

“I think playing Crowder that many times put us in a good position,” Bisby said, highlighting that Three Rivers won 5 of 6 against Crowder this season. “They’re always amped. They’re intense, and we play more intensely when we see teams like that. I think it gets under our skin a little bit, and we start playing better.”

Both have faced adversity this season. Morey got a late start to the season after having surgery, while Bisby bounced back from a midseason slump where she went 19 games without a home run.

But in the district championship against Indian Hills, those third-year sophomores, batting first and fourth in the lineup, were 6 for 12 with three runs and six RBIs.

“I think the freshmen (look at them differently), but it’s not necessarily because they are third-year players,” Null said. “I think it’s because of their work ethic. They’ve been through the battles. They’re coming from a place of experience when they say something. I don’t think it’s necessarily because they are third-year players. We’ve all been around kids who aren’t necessarily examples of who you want around your younger players.”