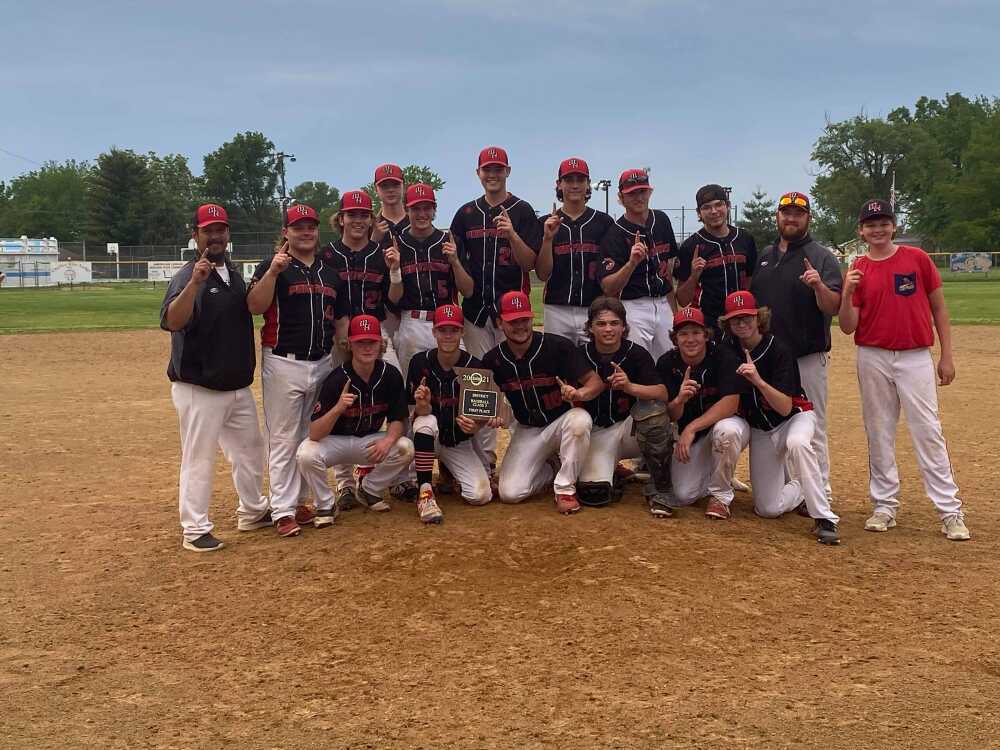 The Meadow Heights baseball team poses following the first MSHSAA district championship won by the Panther Program. Meadow Heights rallied to beat state-ranked and host Chaffee 9-5 on Wednesday after getting past Bismarck 3-2 in the semifinal just hours before.
photo provided

Saxony Lutheran out-hit Charleston 9-2 in its MSHSAA Class 3 District 2 baseball semifinal on Wednesday at Saxony Lutheran. However, the Bluejays rode a phenomenal eight-inning pitching effort by senior Dawson Crawford to force the game into extra innings before falling 2-1 on heroics from Crusader senior Eli Brown, who was tremendous in his own right.

Tied at one run apiece, Charleston replaced Crawford with fellow senior Luke Nichols after Crawford had thrown 102 pitches, including 75 for strikes.

Brown led off the inning with a single to Crawford, who had switched positions with Nichols in center field. It was Brown’s second hit of the game.

Saxony Lutheran junior Wilson Lodge connected for his lone hit, an infield single, which moved Brown to second base.

Nichols got Crusader junior Jacob Johnson to ground out, but not before Brown and Lodge advanced into scoring position.

Saxony Lutheran sophomore Carson Birk had struck out earlier in the game but had also managed a hit off of Dawson. He came through with his second hit, this time off Nichols, for a game-winning single into left field, which scored Brown.

The Crusaders, who are ranked No. 1 in Class 3, move on to face Kelly for the championship today at 4 p.m. at Saxony Lutheran.

The Hawks (19-6) pounded Woodland in the other district semifinal 12-2.

Crawford, who is a Southeast Missouri State signee, allowed six hits and just one earned run. He struck out 11 Crusaders and walked only two.

Nichols took the loss after allowing three hits and one earned run in the ninth inning.

Brown not only joined Birk and Johnson in pacing his team with two hits, but he was dominant on the mound, as well.

He worked 8 1/3 innings and gave up just two hits, one earned run, struck out 10, and walked four.

Saxony senior Tanner King worked the final 2/3 inning and struck out two, while not allowing a hit.

Brown had a run and an RBI, while Hunter Hamilton scored the first Crusader run in the first inning after drawing a walk.

Brown hit an RBI single in that inning to give the hosts a quick 1-0 lead.

Tanner King added a Saxony hit, while Joel Koening also had one.

Crawford hit a home run in the third inning off of Brown to tie the game, while Bluejay senior Nick Crisel added a hit in the loss.

Lincoln scored the go-ahead run in the seventh inning on an RBI single by Nicholas Hindman, while the final offensive punch was made on a Lindgren home run, which also scored Mayfield.

Lincoln had three hits and scored twice, while Lindgren (two hits, five RBI, one run, one walk), Green (one hit, three runs), and Mayfield (one hit, one run) also contributed.

Green was stellar over the final three innings. He did not allow a run, while giving up three hits, striking out two and walking one.

Peyton Atkins, Brennen Fowler, and Alec Brown each had three hits for the Red Devils (17-6).

Fowler, Saddler, and Isaiah Fitzgerald combined to close the game for Chaffee.

The Panthers advanced to the title game by beating Bismarck 3-2 in the semifinal preceding the win over Chaffee.

Meadow Heights moves on to face the winner of Crystal City and Principia in the Sectional on May 24.

Cape Central managed to out-hit Notre Dame 5-4 in its Class 5 District 1 opener, but Bulldog senior pitcher Austin Gast was outstanding in limiting the Tigers to no earned runs in the 2-1 Notre Dame win.

Gast pitched a complete game and five hits and struck out 13.

Jon Dohogne, Connor Wissinger, Jakob Besand, and Will Dodson had Notre Dame hits, with Dohogne and Besand scoring the runs.

Ty Thatcher and Robinson collaborated over the final three innings.