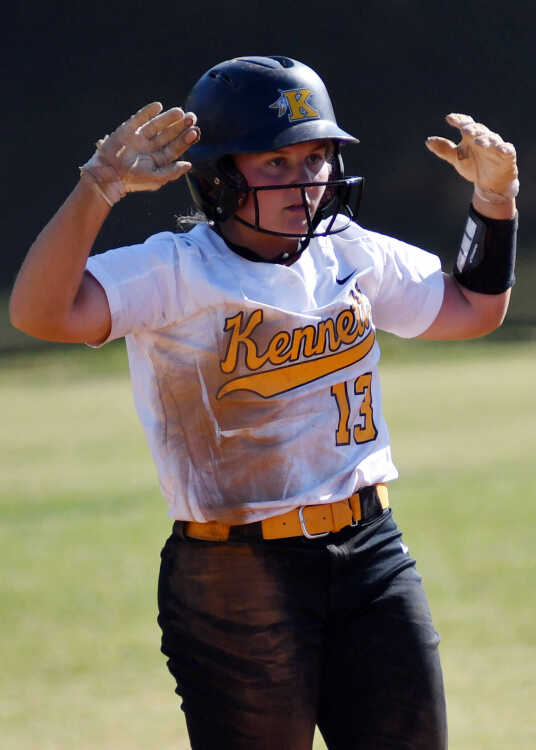 Photo by Dustin Ward, staff
Kennett's Audrey Phillips looks on at second base after collecting the game-ending hit against Scott City Thursday at Indian Park in Kennett.
Order this photo

KENNETT - The Kennett Indians softball squad fell behind 2-0 early on but still found a way to book its fifth trip to the state final four since 2013 Thursday afternoon. 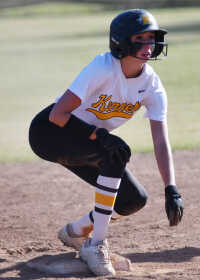 Kennett scored 10 unanswered runs to move ahead of the visiting Scott City Rams 10-2 and eventually secured a 14-4 six-inning win in a Class 2 quarterfinal at Indian Park. 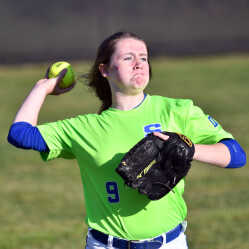 “I knew we would continue to take good swings after falling behind 2-0 in the second inning,” Kennett coach Logan Dollins said. “At the end of the day you have to score to win so I never lost faith in our team when they fell behind. I knew they would come out swinging and that’s exactly what they did.”

“If felt good,” Phillips said of securing the game-ending hit. “I struggled a little bit at the plate today. But it felt good to see the ball hit the bat and go far there at the end.” 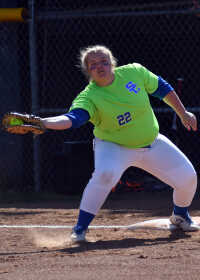 Scott City, which suffered a 17-2 loss to Kennett on Mar. 24, never trailed by double digits until the final inning Thursday.

The Rams scored two more runs in the top of the sixth frame to cut a 10-2 Kennett lead to 10-4. Mackenzie Lawless drew a bases-loaded walk in the sixth frame for Scott City.

“We battled all day,” Scott City coach Alexis Atchley said. “We got runners on in every inning today. But we are a really young team with seven freshmen and sophomores. We are still learning as things go but we were able to get runners on and put the ball in play today. We did a lot of good things and we just have to continue to learn as we grow older.” 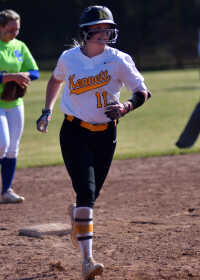 Kennett hit a pair of home runs with two outs in the bottom of the third inning when Kayton Hurst connected for a two-run blast and Olivia Orf followed with a solo shot. 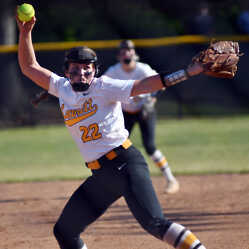 “We are a really good hitting team,” Hurst said. “There aren’t many teams that hit it as well as we do." 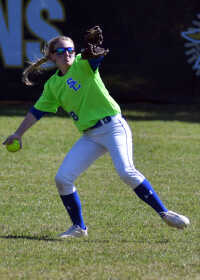 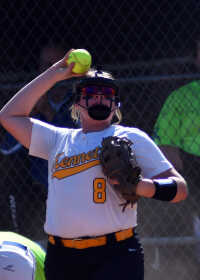 Photo by Dustin Ward, staff
Kennett first baseman Adelynn Nelson tosses a ball back to the circle.
Order this photo

“We knew Kennett could hit,” Atchley said. “They got hit after hit after hit in our first game. We knew we had to prevent that from happening again today. The first couple innings we were able to hang with them today. But toward the end of it they started getting good base hits again. We just have to tip our caps to them today.”

Hadley Wilson pitched the first frame for Kennett before being relieved by Harris who pitched the rest of the way.

The Indians made only one error behind its pitchers.

“I had a tough sixth inning but dug my way out of it,” Harris said. “My team also made a few plays behind me. It was just a great overall team effort today.”

Kennett improves to 16-8 with the victory.

“I’m extremely excited and proud of our young ladies,” Dollins said. “They’ve put in a lot of time since January. At the end of the day they had smiles on their faces after practicing until 8 p.m. at night. I’m proud they are going to get a chance to go back to the final four and compete for a state championship.”

Scott City finishes its season with a record of 14-9. It graduates Kalyn Bruce, Sabrina Henson, and Chloe Venable.

“They have been the best teammates anyone could ask for,” Atchley said of her three seniors.

“I’m excited to go back,” said Hurst, who was a freshman on the 2019 Kennett squad that lost the state championship in extra innings. “I’m hoping to bring home a ring this time after taking second in 2019.”