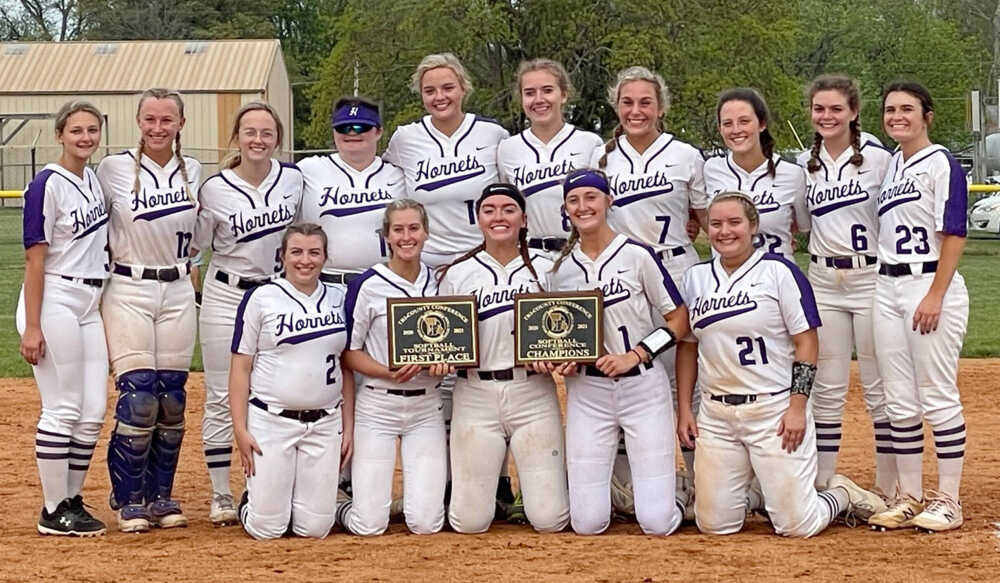 The Holcomb softball squad with its first-place plaque after winning the Tri-County Conference softball tournament Tuesday at Risco.

“It’s three in a row for our seniors who also won it as freshmen and sophomores,” Holcomb coach Matt Casper said. “I’ve been a part of two of them and am happy to be a part of their success. Winning the conference is a big moment for us and we hope it continues the rest of the way,”

Holcomb secured the tournament championship by beating No. 2 seeded Gideon with Risco 17-2 in four innings in the title game.

Seven players drove home at least one run in the title game for Holcomb.

“The wind was definitely blowing out hard today,” Casper said. “We hit the ball really well. We squared it up hard and hit it all over the field. We also happened to get under a few and send them over.”

“We have girls in every grade stepping up,” Casper said. “Our girls know their roles and play them well. We are proud of all of them. There are no classes on a team. It’s just a team and we have high exceptions for all of them and so far they are coming through.”

Brown pitched all four innings against Gideon with Risco. She allowed two earned runs, four hits, struck out three and walked one in a 50-pitch outing.

“Our pitchers have done a good job of staying around the zone,” Casper said. “I think they’ve improved as the year has progressed. Every time we go out there I think they are going to give us a chance to win.”

Aliyah Rojas finished 2 for 2 with two RBIs for Gideon with Risco.

Carlie Stephens went the distance for Gideon with Risco in the circle.

Holcomb (17-3) has now won 17 straight since dropping its first three games of the season to Tuckerman (Ark.), Brookland (Ark.), and Park Hills Central.

“The girls are playing well,” Casper said. “It’s fun to win that many in a row. Everybody likes to win. We just want to play well, minimize our mistakes, and approach everything the right way. So far we’ve come out on the right end of it more times that not.”

Holcomb reached the championship by beating No. 4 seeded North Pemiscot 30-4 in its semifinal Tuesday.

“We gave up a home run early,” Casper said. “But the girls responded well. They stayed patient at the plate and did what they needed to do the rest of the game.”

Kaetlyn Danley, Bailey Cupples, Maleigh Lemings, Hannah Burk, and Alyssa Brown each hit a home run for Holcomb against North Pemiscot. Danley finished 4 for 4 with five RBIs, Cupples was 2 for 3 with one RBI, Burk went 3 for 3 with four RBIs, Lemings came in 2 for 2 with three RBIs, and Brown was 4 for 4 with three RBIs.

Macy Houart and Montana Long also both collected a pair of double for Holcomb against North Pemiscot. Long finished 4 for 4 with a team-high seven RBIs and Houart was 2 for 3 with three RBIs.

Reagan Tillman pitched both innings for North Pemiscot. She helped her own cause by hitting a three-run homer in the top of the first inning.

Alexis Hamm also had one RBI for North Pemiscot.