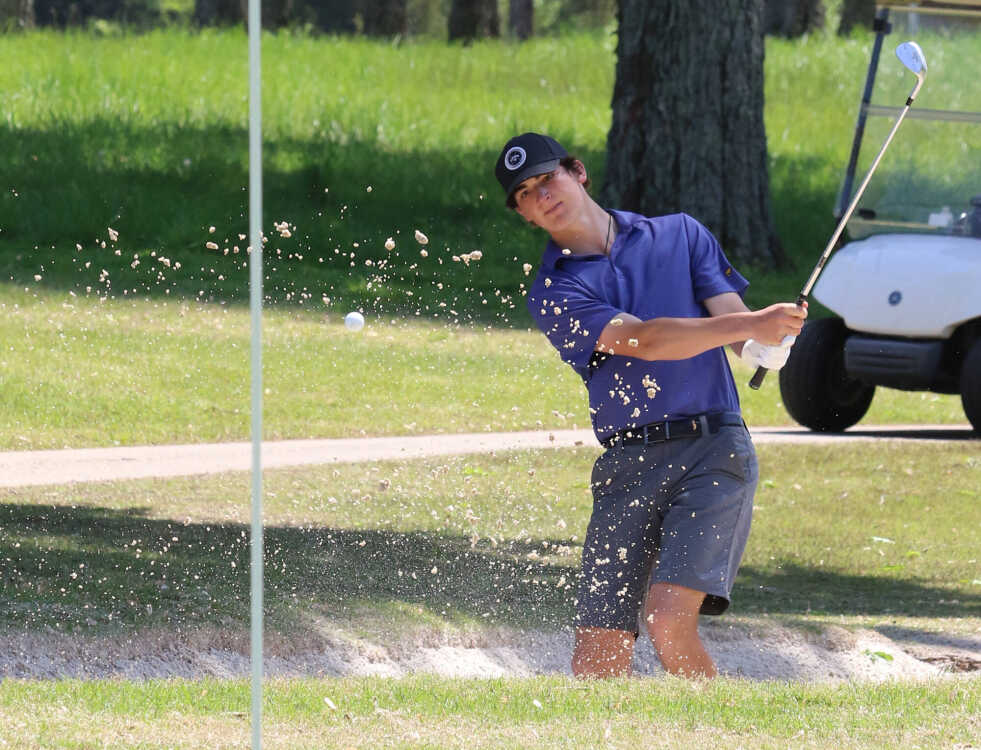 Alex Wiseman of Poplar Bluff hits out of the sand on No. 3 during the 75th Tom Hoover Ozark Invitational on Sunday, April 25, 2021, at Westwood Hills Country Club in Poplar Bluff, Mo.
DAR/Brian Rosener
Order this photo

The Poplar Bluff junior played in the Ozark Shootout on Friday afternoon, shot a 3-under-par round in the rain Saturday in the first round of the 75th Tom Hoover Ozark Invitational, went to prom and was in Sunday’s final group.

Wiseman finished in the top 10 for a second straight year, this time at even-par 142.

He added that he especially enjoyed playing the second round in the final group with first-round leader Bennett Tiefenbrunn and Drake Stepter, who shot a course-record 62 to win.

“The second round, playing with Drake, after the front 9 it was just like, wow,” Wiseman said. “I’m watching this, it’s really cool.”

On the second hole, Stepter asked Wiseman if playing at Westwood Hills every day makes it easier to read the greens because he was struggling to figure out the line of his eagle putt.

“No,” Wiseman answered before joking that sometimes it’s easier not trying to figure it out.

Even though his front 9 featured five bogeys over a six-hole stretch, Wiseman said he was “surprisingly not nervous at all” Sunday.

That was different Friday during the Shootout, during which he was knocked out on the first hole.

“That was really fun, it was really cool,” Wiseman said. “But I’m not scared to admit it, I was shaking.”

The early exit Friday allowed him to work on his swing. He shortened his swing and was able to find the fairway more often during Saturday’s first round. Wiseman was 2-under after 10 holes before his first bogey on the par-4 11th, which ranked toughest in relation to par for the field. It was his only blemish on a card that featured four birdies, two on par-5 holes, for a 68.

“It worked out way better than I thought, honestly,” said Wiseman of playing in the rain.

“I figured I wouldn’t play good. I was just trying to break par.”

An early tee time meant more time playing in the rain but it also gave him enough time to get ready for prom, which was held Saturday night.

Wiseman said he slept in Sunday until about two hours before teeing off with the final group. He was attempting to become the tournament’s second high school winner after Carr Vernon won the 2010 title at age 16.

Wiseman started Sunday two shots behind Tiefenbrunn but after pars on his first two holes he ran into a stretch of bogeys. Following a par on the par-5 ninth, Wiseman played 2-under during the back 9 to finish the tournament at even-par.

Wiseman’s teammate Gatlin Taylor carried his bag wearing white painter’s overalls with ‘WISEMAN’ on the back. They were joined by friends on the walk up the 18th fairway to end the day.

The Mules were also represented by current players Jack Pierce, who tied for 42nd with a second-round 74, and Paul Innes was 10 shots better Sunday with a 73 to finish tied for 54th. Coach Billy Pyland tied for 28th in the senior division.

Brian Haskell followed his even-par round Saturday with a 3-under 68 to win the Senior Division title by 10 shots.

Haskell, who won the 2014 Ozark, finished at 139, the lowest score for a senior champion since Steve Groom shot 136 in 2012. Haskell, from St. Joseph, finished with three birdies over his final four holes after a pair on the front 9 to go with 11 pars.

Kirk Viehl, of Edwardsville, Illinois, and Springfield’s Sean McQueary tied for second at 149 while Groom was fourth a shot back. Dexter’s Marvin Whitson tied for eighth while defending champion Bobby Godwin tied for 11th.

The change in wind direction and pin placements made a big difference in which holes played tough between the two days.

On Saturday, with rain and wind from the north-northwest, the par-4 11th ranked the toughest hole in relation to par. The par-4 fifth was second and the par-3 eighth ranked third. No players in the championship group broke par on the par-3 16th, which ranked fifth.