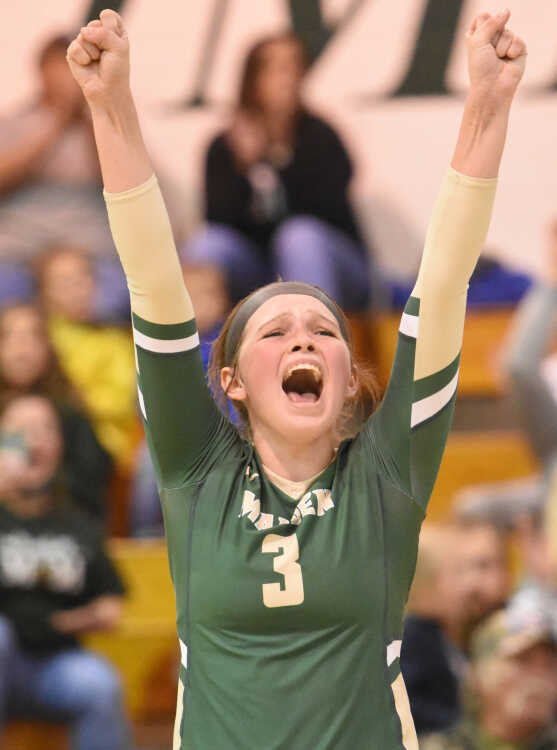 MALDEN ­— With a healthy front row, Malden has picked up its third district title in five years.

“Everybody was saying that they were going to come out on top, and I think it made us want it 10 times more,” Malden senior Alissa Olson said.

Malden middle hitter Mallory Perkins sat out the fifth set six weeks ago with a shoulder injury she’s been battling all season. Twin Rivers took the fourth and fifth sets in their only regular-season matchup and then got the top seed in the district tournament. 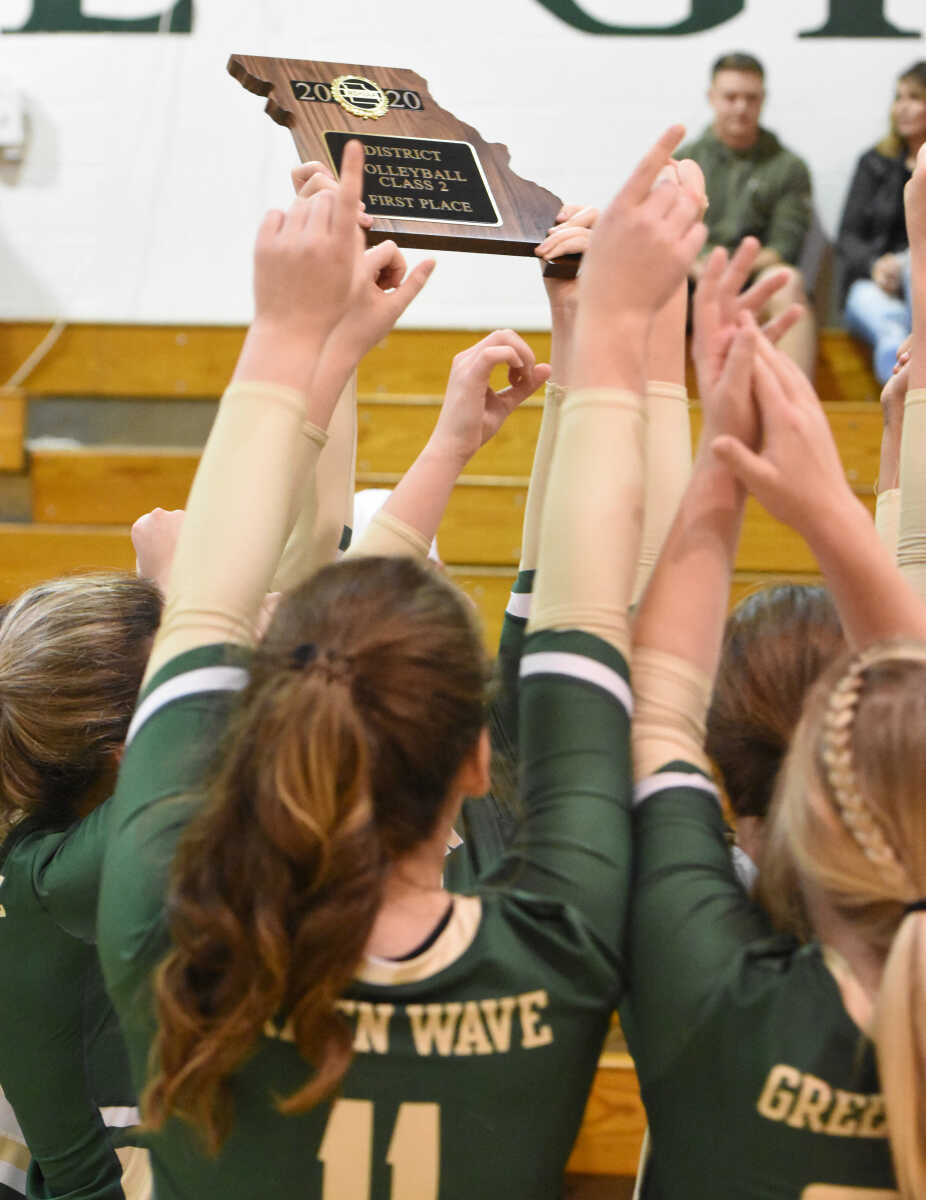 After trading the first three sets, and with second-seeded Malden leading 2-1, the top-seeded Royals led 24-23 in the fourth set.

Perkins tied it with a tip, Olson put the Green Wave ahead with a kill, and Perkins clinched the title with her team-high 15th kill to give Malden the 25-21, 21-25, 25-13, 26-24 win in the MSHSAA Class 2 District 1 championship Wednesday at Malden. The Green Wave will face Saxony Lutheran (12-17-2) in the first round of the state playoffs Saturday at a time to be determined. 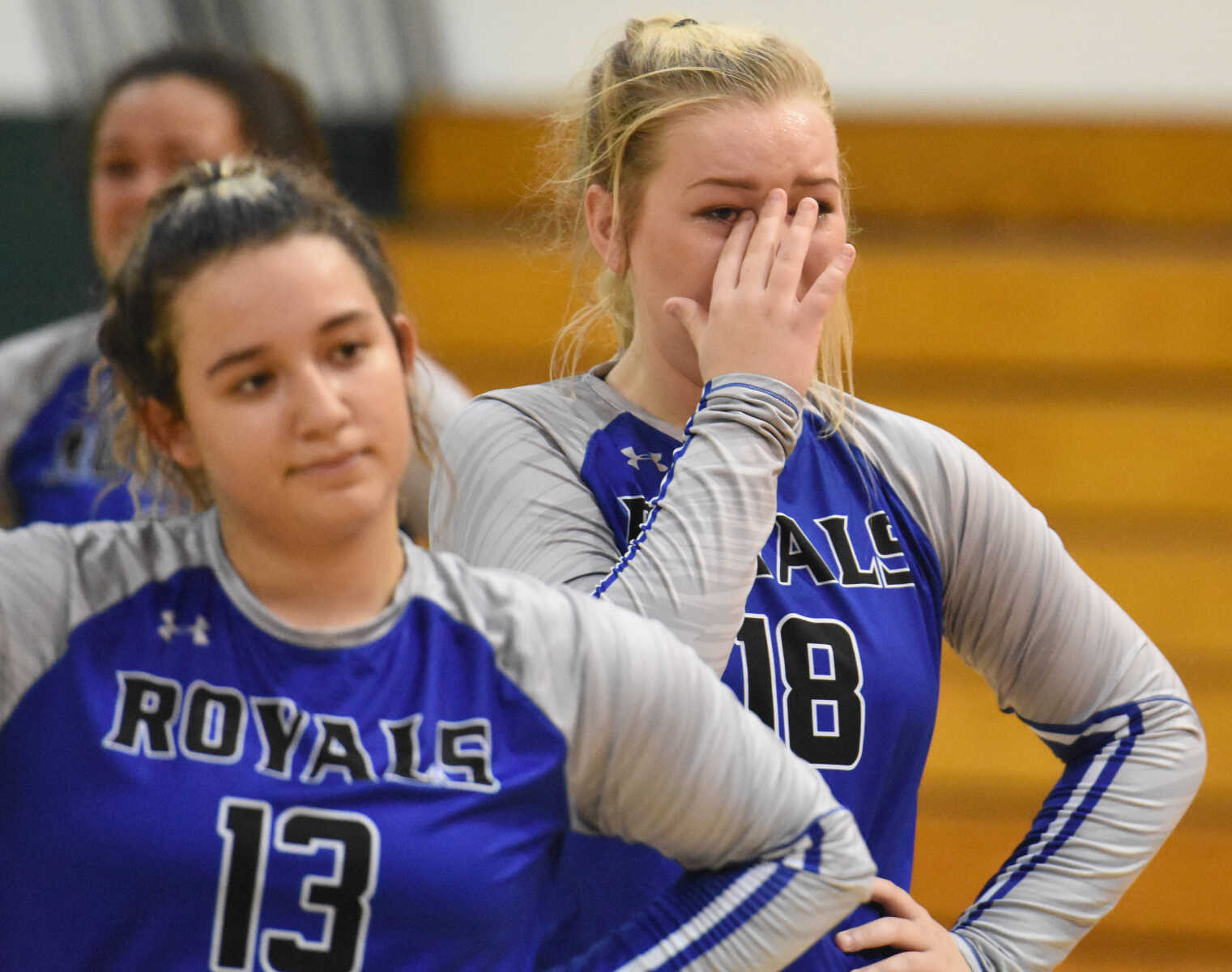 “We did it. I’ve never won a district before,” said Malden coach Alex Glover, who gave a shout out to previous coach Brittany Crane building the team. “I’m so proud of these girls for battling back. We’ve been through a little bit of a slump lately, and I feel like the past week, week and a half, we’ve really bounced back from that, and I’m so proud of them for making it and doing it.”

Perkins had six kills and a block in the fourth set and two blocks for the night.

“Having her in the entire game tonight was something that definitely helped because we were getting blocks all the way around. We were getting touches on their ball,” Glover said.

Twin Rivers (14-11-2) was trying for back-to-back district championships after a one-win season in 2018. It will lose seniors Jaylynn Williams, Andrea Arnold and Drew Love.

“Sad to see them go. (The seniors) did their best, and I hate that this ended it for them,” Twin Rivers coach Whitney Edington said. “They were all a part of the district win we had last year, and it would have been great to have two in a row. We’ve not ever been able to accomplish that. But they are good girls, and they’ve got a lot ahead of them.”

“They have two very, very strong hitters, and I think we were just a little more prepared for what they were going to throw at us,” Glover said.

The Royals, missing a player because of coronavirus, planned to attack the lines more and tip to the setter.

“We hit crosscourt almost every time too, who I believe, is their best passer almost every single time. We tipped to their libero almost every single time,” Edington said. “The girls were very, very nervous from the start. They were playing with their breath held. They were trying, but it was just too much for them ... the nerves. Then something good would happen, and we’d back off, and something good would happen, and then we’d back off. A hard lesson learned.”

The first set was tied at 20-all when Olson put Malden (13-14-1) ahead with a kill. After Twin Rivers hit an attack into the net, Madison Saulsbery got one of her 14 kills, and Olivia Slaughter followed with an ace.

South got the serve back for the Royals with a tip, but Malden got the ball to Makayla Walker for a kill and set point.

The Royals similarly won the second set. Tied at 20-all, Malden committed back-to-back errors, and South followed with a kill and a block to put Twin Rivers ahead 24-20.

Olson earned one of her 13 kills to get the serve back, but Malden got called for a net violation to give Twin Rivers the set.

Malden led from 2-1 on in the third set but was only ahead 13-10 when it went on a 12-3 run to close it out. The run featured three kills from Perkins, two from Saulsbery, and two from Olson.

The Royals took the first three points in the fourth set, but neither team led by more than four in a back-and-forth set with seven ties and three lead changes.

“We played like a family and played together,” said Malden libero Hailey Rojas, who had 17 digs.

Twin Rivers led 13-12 after Alexis Williams got a kill, but Olson answered with a block, and the Royals didn’t lead again until Oldon hit into the net to give Twin Rivers a 24-23 lead.

“Everybody doubted us. To come out on top is amazing,” Saulsbery said. “It makes it 10 times better.”