BREAKING: SEMO football to return in October for 'War for the Wheel' game 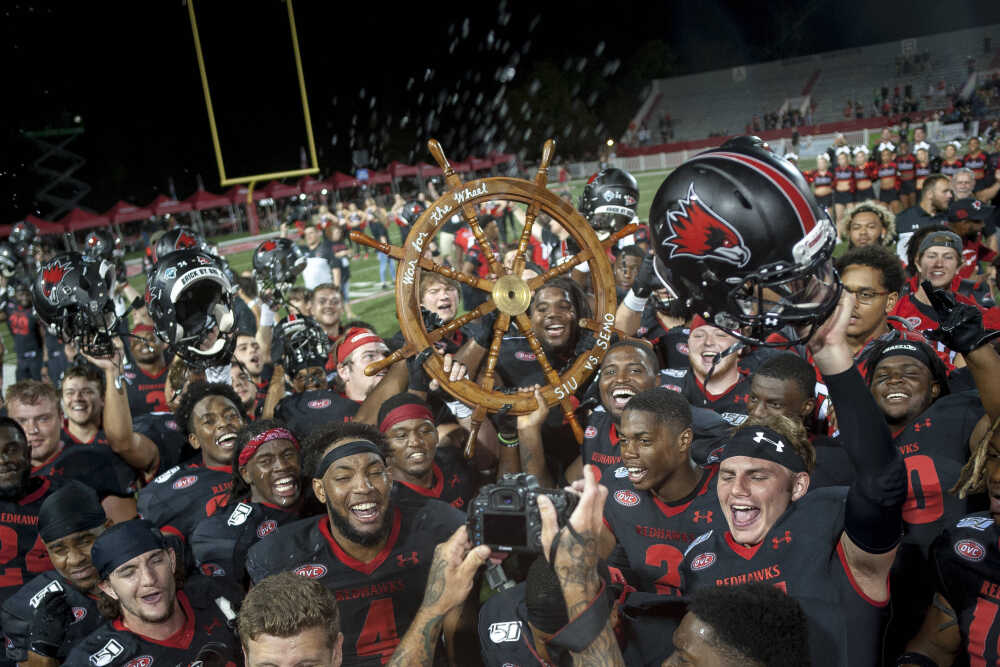 Everything in life during this calamitous year has been fluid and nothing captures that instability more so than the college football season.

Last month, Southeast Missouri State announced that it was postponing its fall athletic season to the spring – and the Redhawks still are planning on doing so. However, the football team is going to conduct a glorified spring football season over the next month culminating in something much more exciting for fans than the typical spring game.

SEMO will travel to Southern Illinois on Oct. 23 for a 6 p.m. game to play the annual “War for the Wheel” game.

“Well, people will wonder ‘What has changed,’” seventh-year Redhawk coach Tom Matukewicz said. “One, the NCAA changed the rule so that this year will not count whether you play or don’t play. So a lot of the concerns that the players had about their eligibility have been answered.”

The other alteration was that the NCAA allowed teams that weren’t competing this fall to still practice. And Matukewicz felt that if his team was going to practice, it might as well have a goal at the end of the training to aim for.

“If we are going to have a spring-type practice in the fall,” Matukewicz explained, “then it only makes sense to try and play a game.”

From a health perspective, the advances in rapid testing have made the Redhawk leadership feel much more comfortable with their student-athletes competing.

"We have worked hard over the past several weeks to get answers to many of the questions we have had about our student-athletes' ability to safely return to participation," said Barke. "We feel we are prepared to move forward with this opportunity and are excited to give our student-athletes a chance to compete this fall."

Both programs were nationally ranked in the STATS FCS Preseason poll, with the Salukis (24th) being one spot in front of the Redhawks (25th).

SEMO has won each of the past two games in the rivalry, which began in 1909 when the two teams crossed the Mississippi River by boat to face each other.

This October will be the 88th meeting between the two teams.

"This is a tremendous rivalry and I'm excited we get to play this game," Matukewicz said. "There is so much history in this series and both fan bases look forward to this matchup every year.

“People are starving for football and we're confident in the protocols we have in place to make a safe return to play."

The game will count as part of an 8-game schedule to be played during the 2020-2021 academic year.

SEMO will play a 7-game Ohio Valley Conference schedule in the spring and all eight games will be taken into consideration as a qualifier for the 16-team 2021 FCS Playoffs that begin in April.

“The players are pretty excited,” Matukewicz said. “We can’t get 10 games in, but it is nice to be able to get one in. We’ll learn a lot about our team and that will help us prepare for our OVC schedule.”

The Redhawks were 9-4 last fall and shared the OVC championship with Austin Peay.

Matukewicz has 14 starters returning (eight offensive, six defensive) and all of his specialists.