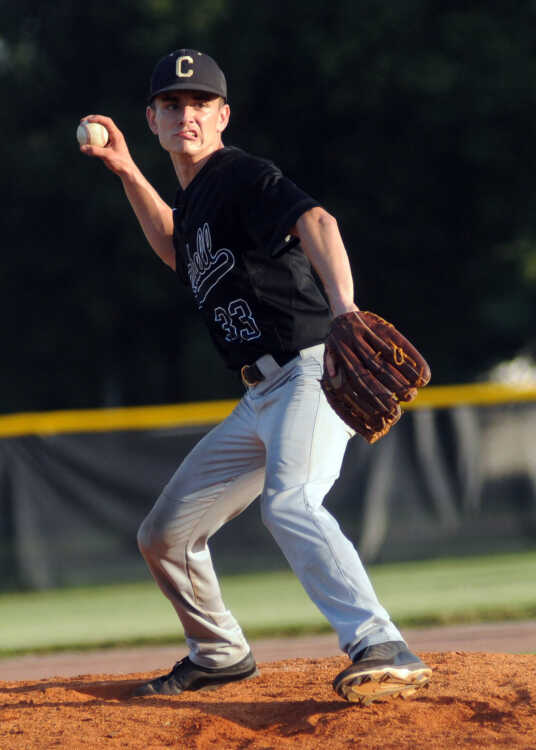 SENATH, Mo. - Things remained close most of the way but the Campbell Camels baseball squad finally strung together the clutch hits it needed to build a comfortable lead in its opener.

“We struggled swinging it for awhile,” Campbell coach Joe Campbell said. “But the last couple of innings we put together some good at-bats and got a big hit here and there to drive some runs home.”

Campbell jumped out to a 1-0 lead in the top of the second inning when a runner from third base scored when Jaxon Langley bunted a ball back to the pitcher.

Senath-Hornersville tied things up at 1-all in the bottom of the third inning on a two-out RBI double by Parker Rhew.

Campbell moved back ahead 3-1 after a runner from third base scored the go-ahead run on a passed ball and another run scored on a sacrifice fly by Madox Belcher in the fifth frame.

Kaden Siebert drove home two runs and Blake Fowler, Luke Weidenbenner, and Briley Smart all collected one RBI in the seventh frame to help the Camels set the final score.

“We were in the game for six innings,” Senath-Hornersville coach Chris McClain said. “I told the guys, ‘We have to find a way to limit other teams damage.’ When we learn how to put a complete game together we can compete with guys but until then it’s going to be a battle. When we find a way to stay up and stay together for an entire game I think we will be competitive.”

Fowler went the distance for Campbell on the hill. He allowed one earned run, five hits, struck out 12, and walked zero in a 105-pitch seven-inning outing.

“He threw great today,” Campbell said. “You cannot ask for anything better from him. He hadn’t thrown in a game since last fall. Him going as deep as he did today is above and beyond what I could ask.”

Rhew pitched the first four innings for Senath-Hornersville. The only run he allowed was unearned. He struck out eight and walked four while throwing 86 pitches.

Park Ezell pitched the final three innings for the Lions.

Tuesday marked the first time Senath-Hornersville and Campbell had competed against an opponent since last fall.

“It’s fun to be back,” Campbell said. “I hope we get to keep playing and get all the sports in this year. It was fun to get out here today and hopefully we get to do it again Thursday.”

Both squads seasons were cancelled last spring due to the COVID-19 pandemic and all of their games last week were postponed due to rain.

“It’s nice just be outside today,” McClain said. “There are a lot of teams that aren’t able to do that right now. We are happy to get out here but we also want to compete and play the game the right way. We are working toward doing that. I thought we hit the ball hard today at times but I think we have to put the ball in play more often. We need to cut down on strikeouts and put the pressure on the defense.”

“We will be able to get out and practice the rest of this week,” McClain said. “The weather looks like it will hold up. The rain got us last week but everyone is in the same boat. We just need to find a way to get on the field as much as possible and get reps in. It’s a process but I think the guys have come a long way since last fall and hopefully we will continue to grow."

Rhew is one of the top hitters and hurlers on the Lions’ squad.

“Parker is one of the leaders of our team,” McClain said. “He’s been our No. 1 on the mound and bats in the three-hole. He’s been a good player for our program and is going to continue to do a good job leading our team.”

“Garron transitioned from first base to the outfield for us this fall,” McClain said. “I think he’s done a good job of settling in and finding a home out there. He will see a lot of fastballs hitting down in the lineup. Hopefully he will run into some of those and hit them a long way.”

Coronado is the starting third baseman for the Lions.

“Holden's been with our program for a long time,” Coronado said. “He’s another guy people look at to lead our team. I think if he can figure things out and slow himself down a little bit he could do some really good things for us this season.”

Owens is getting playing time at catcher as he continues to recover from a arm injury.

“He’s coming back from a arm injury,” McClain said. “We weren’t for sure if we would get him back but his arm has come around and he is serving as our starting catcher. He will put the ball in play. I think getting him back will really change the look of our team.”