PROVIDED PHOTO
Pictured are members of the 2020 Kennett Swim Team. 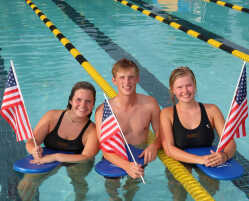 Over 130 swimmers competed in the final inter-squad meet Friday. 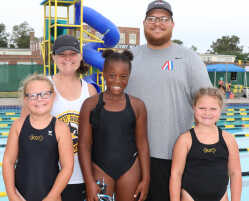 PROVIDED PHOTO
Mendy and Andrew Webster (pictured back row left to right) were selected as the recipients of the Wright Parenting Award. This was an award established in 2011 in order to honor Floyd Wright. Mr. Wright was a long time Kennett Swim Team supporter, parent, and Kennett Swim Team Board President. He passed away in December of 2010. The award was established to honor parents who go the extra mile in support of the Kennett Swim Team.

“I am so thankful we were able to have a season at all,” longtime Kennett swim coach Malinda Harris said. “It ended up being a lot of fun for our kids. We were able to divide our swimmers into two teams and have two very competitive inter-squad meets since we had 180 swimmers in our program this summer.”

Kennett, which traditionally competes in meets once a week in June and July against other teams in the Southeast Missouri Swim Conference, was forced to schedule inter-squad meets as an alternative when its conference season was canceled due to the COVID-19 pandemic.

“We missed our first two meets in June because we had to take a little bit of a break due to COVID-19,” Harris said. “But we came back the last week of June and got two weeks of practice in before our July meets.”

“It was a lot of fun,” Harris said. “The kids had a great time competing against each other. I’m thankful to our Swim Team Board for allowing us to have a season and to the Park Board for allowing our program to use Sheryl Crow Aquatic Center all summer. It provided our kids with a little bit of normalcy to their summer.”

“We had a tie in one age group and several other age groups where the next person was very close in points,” Harris said.

“I wanted to make our season as much of a normal experience as I could,” Harris said. “Those are awards we’ve always presented in the past. Even though we had to stop our season for two weeks I wanted to reward the kids that were there every day when we did have practice.”

Mendy and Andrew Webster were selected by the coaches as the recipient of the Wright Parenting Award. The award was established in 2011 to honor Floyd Wright and is presented annually to parents who go the extra mile to support Kennett Swim Team. Wright, who passed away in 2010, was a longtime Kennett Swim Team supporter, parent, and former board president of the swim program.

“Each year the coaches look for a set of parents that go above and beyond and are more about the team than themselves,” Harris said. “The Websters became part of our program three or four years ago when the moved to Kennett. They’ve been very supportive parents, not only with their own children but also with other children in our program. They help transports swimmers to and from meets and practices and we wanted to take an opportunity to honor them with this special award.”

“All three are all long-time swimmers,” Harris said. “They’ve been swimming since they were five or six-years-old. They and their families have been very dedicated to the swim team for numerous years. We will miss them and their families next summer.”

Harris echoed her thanks to the community for allowing her swimmers to compete this summer.

“I’d like to thank the community for being supportive,” she said. “I didn’t hear anything negative about us deciding to move forward with our season which was a breath of fresh air with so much negativity in our world right now. It was a great opportunity for our kids to get out there and experience a little bit of normalcy in their summer. We are blessed to be in a community that is so supportive and trusts us with the safety and well-being of their children.”