It was either going to be a good phone call or a bad one. A few days later, Vaughn’s phone rang, and he excused himself to go outside and take the call. He was offered a college baseball scholarship and recently signed to play for Hannibal-LaGrange.

“I was very anxious, just waiting for the phone call, wondering which day I was going to get it, then I finally got it. All the work I’ve been putting in, all the late practices, everything, it all paid off,” said Vaughn, who then went inside to tell his mom. “It was pretty loud for a few minutes … All the joy you could think of. It was really exciting.”

Poplar Bluff didn’t get to play its spring season this year, and Edwards said Vaughn was going to be a leader on the team and possibly the team’s primary first baseman.

“I’m proud of him. He’s worked hard for us to get to the spot he’s at, and it shows that hard work and dedication will get anybody to where they want to be,” Edwards said. “He worked hard in the weight room and worked hard in the offseason and pushed himself hard every day. He just got faster and bigger and stronger.”

Vaughn was also a superb student at Poplar Bluff and plans to pursue a career in law enforcement.

“He worked hard every day and a great student. He’s a high GPA student, 4.0, and he’s going to be a good athlete for them,” Edwards said. “Being a good student-athlete and a role model up there, he’ll be a leader. He’ll work his butt off to get time at first base, but he’ll definitely get some hacks in. He’ll be a hitter for them.”

Vaughn added that Hannibal-LaGrange reminds him of a bit of home. An NAIA school in Hannibal, Missouri, the Trojans were 7-12 to start the spring season under fifth-year coach Ben Strother before the season was canceled.

“It’s got a good vibe to it. It’s very calm, not too many people, and all the people that we saw up there were very nice and kind,” Vaughn said. “It feels great. This is what we all wait for, growing up playing baseball, is playing at the next level. Every time.” 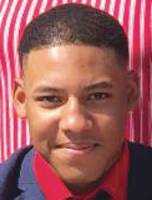