The Van Buren senior and Big Springs Conference Player of the Year recently committed to play for Williams Baptist University.

“It seemed like the best fit for me, coming in as a freshman, getting to have experience on a JV team, so I don’t sit,” Jackson said. “Their campus looks really nice. They have a lot of good values. They are obviously a Christian college and I am a Baptist growing up, so that was something great. Their class sizes weren’t very big, so I got to have a lot of individual work that you could get. Coming from a small town like myself, it seemed like it would be an easy transition.” 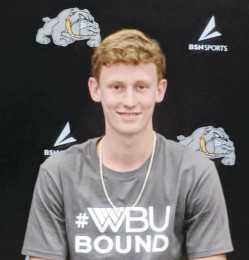 In three years of playing varsity, Jackson finished with 1,121 points and shot 38% on 3-pointers during his career.

He was a two-time all-district and all-conference selection and averaged about 16 points a game as a senior.

“I really believe he’ll have a great college career because he can fill a role that the game of basketball calls for now,” said Van Buren coach Jacob Black, highlighting Jackson’s outside shooting. “I’m excited for him, 120 minutes from me, so I can cut practice short and go watch him play.”

This year’s Bulldog roster won 20 games for the first time in 10 years.

“He is the leader of the team that is the first time, I believe, the conference championship tournament and regular season since 1987, which his dad was a junior on,” Black added.

It was a bit of a bittersweet moment for Black, who had helped coach Jackson every year since fifth grade except for when Jackson moved up to varsity as a sophomore, and Black was still the JV coach.

“He has been an absolute pleasure. He is self-made. He and his dad put in a ton of time. I could cry, he means that much to me. He did it himself, it wasn’t anything that was born, he worked his guts off for it,” Black said.

Jackson said he plans to study physical therapy and education.