'Historic' SEMO hoop season to get one last party - virtually 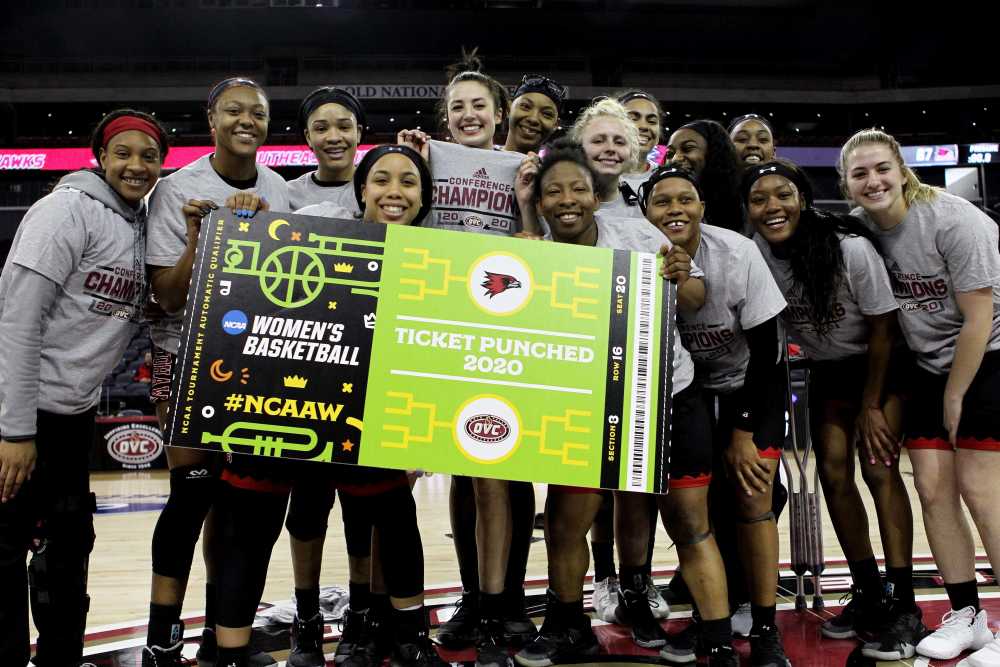 The Southeast Missouri State women’s basketball program is going to celebrate its most successful season at the NCAA Division I level in a “virtual” manner Thursday. However, make no mistake about it, what the Redhawks accomplished during the 2019-20 season was very, very real.

The team will gather via a Zoom conference call Thursday at 5:30 p.m. and Redhawk fans are encouraged to participate.

“We normally always have an end of the year banquet,” sixth-year coach Rekha Patterson said, “to celebrate the season and give our seniors a chance to have a senior speech. With the historic season that we had this year and a wonderful group of seniors, we did not want to keep them from having this opportunity.”

What Southeast achieved this past year was indeed “historic.” The Redhawks won 25 games (the most at the NCAA Division I level) and battled for the Ohio Valley Conference regular-season title until the final weeks of the season, before finishing third with a 14-4 league record. However, in the postseason league tournament, the Redhawks left little doubt which team would earn the league’s NCAA Tournament bid by winning the event.

Southeast survived an overtime upset bid by No. 6-seed Tennessee Tech in the opening round but laid waste to No. 2-seed Belmont (114-99) and top-seed UT Martin 67-47 in the title game.

“What better way,” Patterson said of honoring the team, “people can be at home and be a part of the celebration of the season.”

The Redhawks improved from eight league wins the previous year in large part because of an unselfish attitude that permeated the entire program, according to Patterson.

The program adopted the mantra “one healthy heartbeat” as a slogan for their togetherness and it showed on and off the court.

“The ‘one healthy heartbeat’ focus that we had all season definitely helped our selflessness,” Patterson said.

The Redhawks dished out 58 more assists over their 18-game OVC schedule this year in comparison to the previous season.

“We really cared about the program,” Patterson said. “We had talented players, as we can see, but they didn’t care who led us in scoring.”

The Redhawks passed for 15 or more assists in 17 games and won 15 of those.

“All this team cared about was doing whatever it took to win,” Patterson said.

The seniors that will be recognized during the virtual banquet are Carrie Shephard, Jessie Harshberger, Iyanna McCurdy, Jocelyn Taylor, and Denisha Gardener.

“I thought we had great leadership,” Patterson said. “And we had great buy-in from everyone in the program from the coaches, players, trainers, strength and conditioning coach, everybody that was involved in the program bought into us having one healthy heartbeat.”

The team finished the season by being ranked 21st in the final CollegeInsider.com Mid-Major Top 25 poll.

Individually, Patterson was named OVC Coach of the Year, while junior forward Tesia Thompson earned First Team All-OVC honors, as well as was named as the OVC Tournament Most Valuable Player.

Shephard was also named First Team All-OVC and to the OVC Tournament Team.

Sophomore guard Taelour Pruitt, whose 3-pointer at the buzzer beat Tennessee Tech in the tournament, was also named to the OVC Tournament Team.

For those who wish to participate in the virtual banquet, RSVP Redhawk director of basketball operations Courtney Smith at cesmith@semo.edu to receive the login credentials.