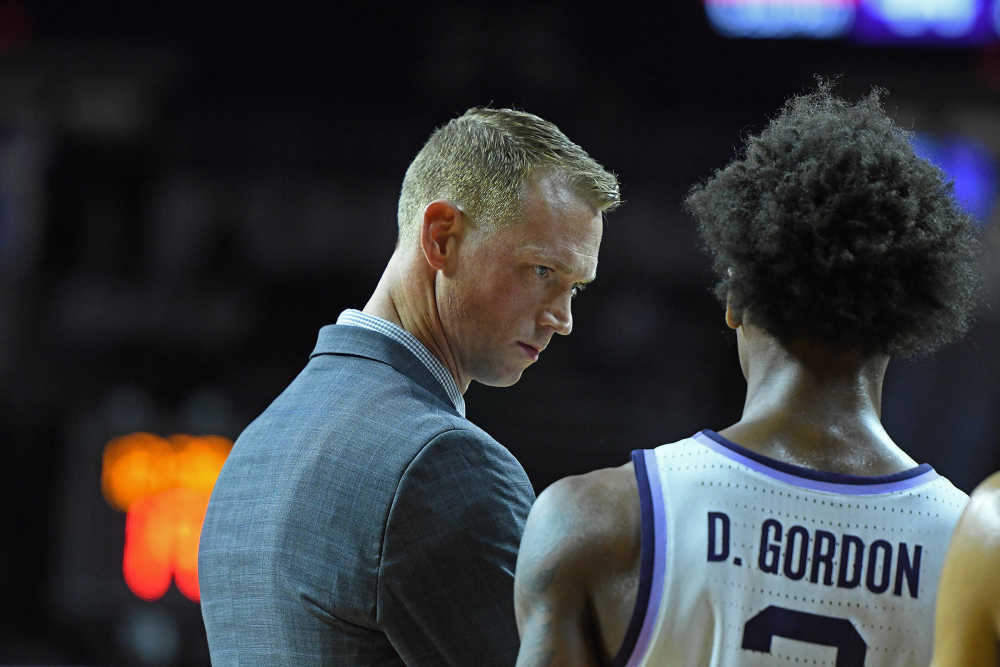 Former Kansas State men's basketball assistant coach Brad Korn speaks with a Wildcat player during a game this past season against Marquette at Bramlage Coliseum in Manhattan, Kansas.
Courtesy of Kansas State Athletics

Recently-hired Southeast Missouri State men’s basketball coach Brad Korn has spent the initial three weeks in his new position operating with his hands tied behind his back, but in the world that exists today, he is no different from any other coach across the country.

Korn has five open scholarships that he could fill for the 2020-21 season, but due to the coronavirus situation, he can’t go visit face-to-face with any prospects, nor can he have them come to him in Cape Girardeau and see the city, the campus, and the facilities.

Today marks the first day of the signing period for NCAA Division I programs and the period will last through August 1. Despite the obstacles, Korn has landed a pair of players, however.

Redhawk players Nygal Russell and Isaiah Gable each announced their intentions to transfer last month, but they have not committed to another program yet. Upon his hire, Korn left the door open for them to return.

“I did reach out to everybody on the team, whether they said they were going to come back or not,” Korn said. “I just wanted to introduce them to myself, because at the end of the day, this is their school still.”

At this point, the Redhawks have on scholarship for next season just one frontcourt player (senior Darrious Agnew), a pair of wings (redshirt junior Nana Akenten and redshirt sophomore Jordan Love), and backcourt players in seniors Oscar Kao and Chris Harris, junior Reed Jr., and sophomore DQ Nicholas. So filling the depth chart with athleticism and size are the priorities over the next few months.

Korn spoke with Semoball.com about how he’ll approach retaining players in the future so that he doesn’t have to navigate this type of roster overhaul each spring.

“There are players transferring from everywhere,” Korn said. “It’s more about establishing those relationships with the guys and building that trust on a daily basis. If it is just words and ‘Hey, you can trust me,’ and then you go out and coach them and go home, I don’t think that you will build that long-lasting, genuine trust that you have to have. Especially with today’s players.”

Korn is trying to do so via phone this spring as he lays the foundation for his program. His message resonated with Reed and Long.

“There is so much instant gratification,” Korn said of today’s players. “They hear so many different things and voices with our phones and social (media) and everything else. The coach just talking to you, in front of the team, five minutes before practice, that is not going to cut it.”

Korn explained that players today need to be managed to have full “buy-in” with any program. Once the Southeast players have returned to campus, Korn said he’ll be very attentive to making sure he and the student-athlete are on the same pages.

“There has to be carved out time to personally get to know and develop deep, genuine relationships,” Korn said. “Really, to get them to believe in something bigger than themselves. If we are going to have success here – I should say, WHEN we’re going to have success here – it will be when they buy into our team. That we are playing for SEMO. Then I can come in and get them to where they want to be as an individual.

“Then I won’t have to worry about that part, which is where a lot of problems can come from. If we treat people the right way, and we give them everything they need to be successful, and they feel that is genuine, then you are able to sustain them through some hard times and they won’t be so apt to jump ship when things go wrong.”