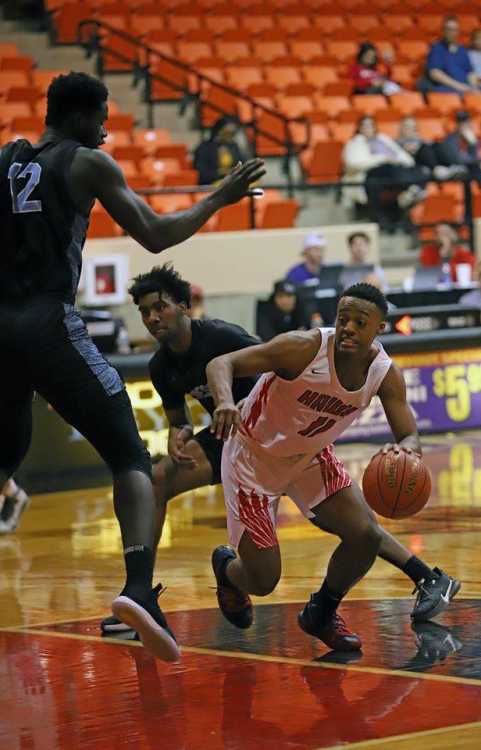 Howard College sophomore guard Eric Reed Jr. looks to score during a game for the Hawks this past season in Big Spring, Texas.
Photo courtesy of Howard College Athletics

When Brad Korn was hired as the men’s basketball coach at Southeast Missouri State last month, he didn’t mince words when it came to what he planned to build the Redhawk program upon.

He stated that the Redhawks would be “defined by the pillars and cornerstones of our program.”

The junior college athlete was talented enough to have options (he was recently offered by Sam Houston State and New Orleans) on where to spend his final two seasons playing basketball and earning a degree, but he believed in Korn’s message – and his history – enough to commit to the Redhawks Wednesday.

“What made me feel comfortable with was Coach Korn,” Reed Jr. told Semoball.com Wednesday. “His credentials and the things that he was telling me, I really want to play for him.”

After starting just 14 of 25 games as a freshman, Howard utilized Reed Jr. as a starter in all 30 games this past season.

The native of Baton Rouge, La. averaged a team-high 15.7 points per game and dished out nearly three assists per game, but offense wasn’t what he felt the most affinity toward.

“I love defense,” Reed Jr. said. “I love it. That is probably one of the best aspects (of my game). I want to guard the best player.”

“For me, rebounding sets the tone for me being able to score,” Reed Jr. said. “Being a rebounding guard, it gives you the opportunity to go get tip-ins. It opens the game for you because now the defense has to not only worry about playing you off the dribble, they also have to box you out. Most players don’t like to box out.”

Reed Jr. considers himself a “combo guard,” who can generate offense or create offense for others.

He scored in double figures 27 times this season and topped 28 points in three separate games. However, Reed Jr. also had a season-best seven assists in one game.

“I consider myself more of a point guard,” Reed Jr. said. “But a lot of coaches have told me that they consider me a combo guard, because I can score the ball, but I’m not selfish. I find people up the court and can penetrate and kick.”

“My dream and vision is to have our team embody the spirit of Southeast Missouri,” Korn said. “And to have a prideful brand of basketball that everyone can relate to.”

The Redhawks now have eight scholarship players for the 2020-21 season, with five open scholarships.

Reed plans on studying either psychology or sport management.

“I’m not sure if basketball is ever going to leave me,” Reed Jr. said. “Whether it is me training kids or me being a coach, just being around basketball is like being at home.”