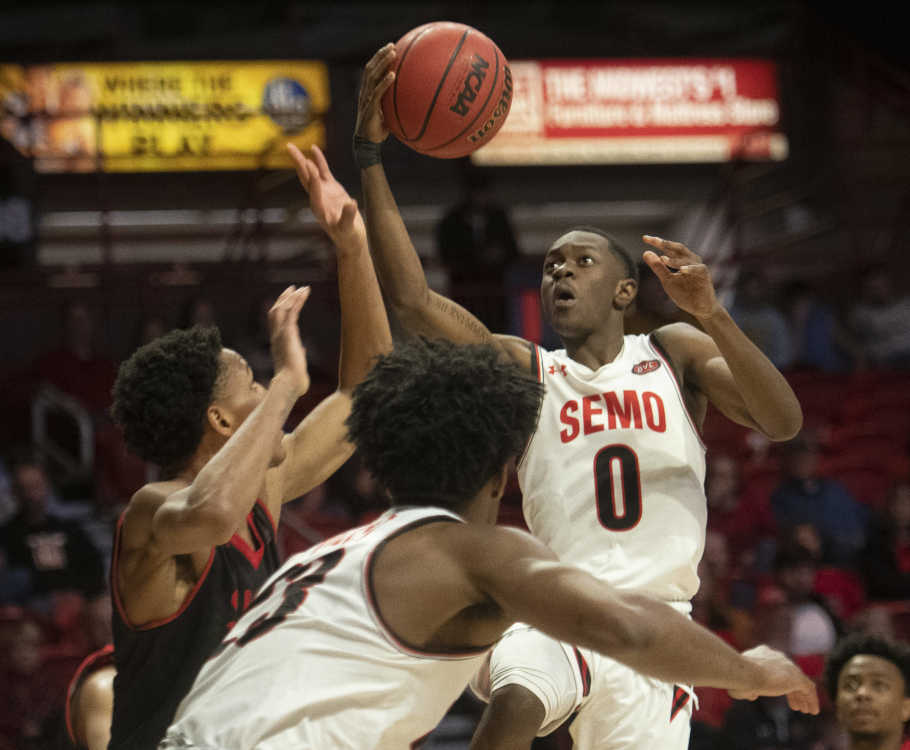 Southeast Missouri State sophomore guard Alex Caldwell (0) drives to the basket during the Redhawks' 75-71 victory against Southern Illinois University Edwardsville this past season at the Show Me Center.
Jacob Wiegand ~ Southeast Missourian
Order this photo

The list of NCAA Division I men’s college basketball players choosing a new program in which to play continues to grow by the hour during this time of the year.

According to the site devoted to tracking such, verbalcommits.com, the number is well over 600 and is trending toward the 2019 number (997).

In hindsight, what is clear is that the student-athletes should spend more time in math class than worrying about finding a “better fit.”

According to the site, of the 997 athletes that sought a new home a year ago, 440 ended up at a non-Division I institution. And that doesn’t include the 47 that ended up nowhere.

If I was to tell you that you could make a decision regarding your future, but there was nearly a 50 percent chance that it wouldn’t work out in your favor, would you still make that decision?

However, this generation of college basketball players seemingly follows the same mantra that their peers did during spring break a few weeks ago.

Be it not ending up boosting your athletic career, or contracting the coronavirus, in their minds, those are problems that only OTHER people deal with.

Closer to home, the 2019-20 Southeast Missouri State men’s basketball roster lost four players (Alex Caldwell, Nygal Russell, Isaiah Gable, and Sage Tolbert), who have elected to leave the program prior to their eligibility running out.

For the Redhawks, this is an annual dilemma in which you can set your watch by.

“There are players who are transferring from everywhere,” recently-hired Southeast coach Brad Korn said. “It is about establishing those relationships with the guys and building that trust on a daily basis. If it is just words, ‘Hey, you can trust me,’ and then you coach them and go home, I don’t think that you are going to build that long-lasting, genuine trust that you have to have.”

No program is immune to the transfer problem, including Korn’s previous employer, Kansas State.

The Wildcats currently have five players who have announced their intentions to leave this spring.

As in the callous and oblivious spring breakers of last month, espousing facts to the college athletes seemingly does little good.

A year ago, there were 233 players that declared for the NBA Draft, an event in which only 60 players get selected. So just as with the transfers, those with professional aspirations demonstrate that math isn’t exactly their strong suit.

A glance at the history of the Redhawk program, as it relates to transferring players, indicates THAT subject matter isn’t relevant either.

When you study the former Southeast players who have chosen to transfer in recent years, very rarely does their story end well. And those athletes are almost never as productive as they were in Cape Girardeau.

In the class of 2016 signees, four players (Joel Angus III, Tony Anderson, Jaylin Stewart, and Clyde Santee) all opted to leave the program.

Angus III saw his minutes at Hofstra decline, his shooting percentage get worse, and his scoring cut in half.

Anderson declared for the NBA Draft following his freshman season of coming off the bench for the Redhawks (needless to say, he wasn’t drafted), and there is no record of Stewart and Santee ever playing collegiately again.

Eaddy had two productive seasons at Santa Clara, but recently chose to leave for a final season at USC (thus, making the number six for how many high schools, prep schools, and colleges in which he has played), Duffus averaged 2.1 points per game for Eastern Illinois (his fourth college) this season, Tchiengang played sparingly at NCAA Division II Angelo State, and Benton transferred to Youngstown State and saw his starts decrease from 17 to 4 and his minutes drop from 19 to 15 (and that doesn’t even include the fact that he was in Youngstown, Ohio for a year, but I digress).

Many Southeast fans still talk of Mahoney and follow his contributions at Creighton this past season. However, his minutes and starts with the Bluejays both dropped precipitously from his time at Southeast and he shot a worse percentage.

So the message to pro scouts is, the higher Mahoney climbs in competition, the worse statistically he becomes.

How is that helping his future?

Mahoney could have finished his career as THE key piece in rebuilding a Southeast program and been lauded as one of the all-time greats in Redhawk lore.

Which brings me to the final issue that transferring players never think of. Their ability to network in the future.

For every player, at every level, at some point, their athleticism will diminish and their careers end. That is when professional contacts are the most vital.

When a player bolts from his first (or second) college early, in order to spend a brief amount of time at his final destination, he has burned that networking bridge at School A (and B), and wasn’t at his last stopover long enough to develop those “genuine” relationships that Korn mentioned.

That player is a 27-year-old basketball vagabond with no place to call home, no fan base that remembers him or cares to, and no coaching staff to help him transition to the next phase of his life.

As it turns out, his “circle,” which is comprised of uninformed people telling him that “Coach (fill in the blank) is holding you back” never thought about that, did they?

So for all of those players that think poor decision making will never negatively impact them, go ahead, roll the dice and transfer.

Good luck. You will more than likely need it.