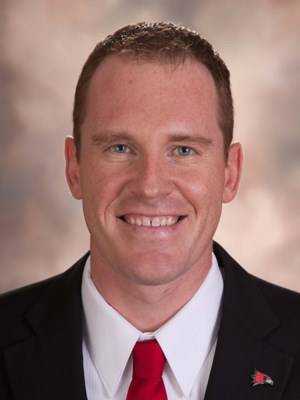 When the clock ticked Wednesday morning to 12:01 a.m., thus marking the start of a new month, there was no one involved in collegiate athletics more appreciative of the moment than Southeast Missouri State athletic director Brady Barke.

Barke is nearing the start of his fifth year of leading Redhawk athletics, and it is safe to say, he could work in this field another five DECADES and never be asked to endure a month as he did in March.

He began the month by making the difficult decision to relieve men’s basketball coach Rick Ray of his duties on March 3.

“It’s never the part of the job that you want to do,” Barke said of that decision. “After five years of working side by side with him, or anyone else, you develop relationships beyond just coaching, with families. It’s hard.”

During the 15-minutes he met with the media that afternoon, he checked his cell phone afterward and he already had received 11 texts/calls. That would be a precursor of how his month would unfold.

As low as that moment was for Barke, having to fire a coach that everyone universally liked away from the basketball court, he had to ride an emotional rollercoaster 48 hours later as the Southeast women’s basketball program opened play in Evansville, Ind. as the No. 3-seed in the Ohio Valley Conference Tournament on March 5.

He watched the Redhawks escape an overtime upset bid by No. 6-seed Tennessee Tech in the opening round, but he had to divide his attention even further, as the league’s athletic directors were conducting their annual meeting to discuss a myriad of issues that each institution would have to handle moving forward.

Oh, and he was conducting a coaching search, too.

“That initial week that I was in Evansville,” Barke said, “your normal calendar, your normal day, as it usually exists, is much different. I was able to make some calls to be able to filter through the initial stage of the (coaching search process).

“It actually sometimes is easier when you get away from campus.”

On March 6 and 7, Barke got to witness Southeast stun the rest of the OVC – not in just winning the tournament – but doing so over No. 2-seed Belmont and No. 1-seed UT Martin by 15 and 20 points, respectively.

That victory propelled the women’s program to its first NCAA Tournament in 13 years and was one of several crowning moments that Barke’s athletic department has enjoyed over the past 12-plus months.

The euphoria wouldn’t last, however.

On March 12, as the nation was being slowly engulfed by the COVID-19 situation, the NCAA canceled the men’s and women’s postseason tournament.

He had no time to wallow, however. He was amid a coaching search and his phone – good Lord – the calls and texts wouldn’t cease.

“We knew the interest was going to be great,” Barke said. “The volume of the texts and calls and emails, all of that stuff, was as expected.”

Four days after the NCAA Tournament was canceled, the OVC shut down spring sports and three days later, Barke was throat-deep in the decision to shutter the university’s doors.

“Where it really got to be a challenge was as we started to deal (with the COVID-19 situation) as a campus,” Barke explained. “Now your focus is shifting toward managing (the campus closure) and work with the other coaches through those challenges and closing campus for students.

“Moving kids to online (studies), shutting down the residence halls, all of those things, being the director of athletics, I needed to communicate those things to our coaches, our staff, and our student-athletes. But I was also part of the president’s executive team and had to be, as much as I could be, part of those conversations. It made it a lot to juggle.”

Oh, and he was conducting a coaching search, too.

He had known that he wanted to speak with the eventual basketball hire, Kansas State assistant coach Brad Korn, for a while. The two had known each other since both worked at Southern Illinois.

“He is someone that I had followed throughout his entire career,” Barke said, “and been fortunate to work with and watch him grow in his career. I was well aware of what he had done.”

The two spoke on the phone and once those discussions became deeper, Barke knew he wanted to have an in-person meeting. However, as everyone is cognizant of such, travel is challenging these days, to say the least.

“It wasn’t as challenging in the beginning,” Korn said, “because that is how it all starts anyway, phone calls, text messages, so in the beginning, it wasn’t as bad. But when you got closer and closer, now, it was ‘Are you going to come to campus? Are we going to have a face-to-face?’ A lot of those things changed quickly.”

In some coaching searches, the athletic director and candidate operate in a clandestine manner in order to keep the process quiet. Perhaps meeting in an obscure location. However, Barke and Korn were lucky to meet – period – let alone try to complicate matters.

Barke had Korn come to Cape Girardeau and hosted him at his house and showed him the (closed) campus and facilities.

Barke was able to culminate the process by speaking at a makeshift press conference (with no press due to the public health policies) and he termed the search as “exhausting.” Following the press conference, Barke packed up his work and moved home, as the campus had transitioned to a “telework” environment.

“I will be working from home for the next several weeks,” Barke said. “I very well may take a day or two off during that time. My kids and my wife would probably appreciate that.”