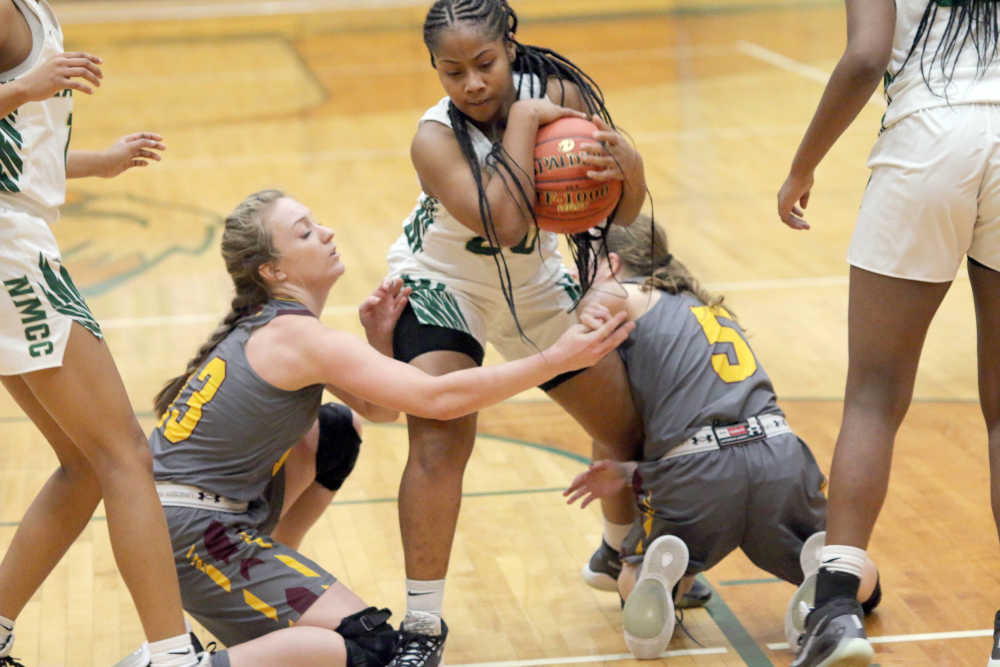 NEW MADRID, Mo. — Turnovers are problems for any basketball team.

However, against a team, like the New Madrid County Central girls this season, it’s become a calling card to turn their opponents over with an unforgiving pressure defense. Having long, athletic, and quick players doesn’t hurt either, and it showed against Kelly (14-10), in its 76-59 win on Thursday night, at New Madrid County Central High School.

Despite not getting off to its best start, the Lady Eagles still found a way to put the Lady Hawks away at the end of the first half, thanks to a barrage of turnovers on Kelly’s end.

Kelly committed seven turnovers in the second quarter and 11 in the first half, as NMCC (17-6) took a 44-29 lead into the locker room.

“Something we talked about yesterday at practice was getting some easy ones,” NMCC head coach Toby Heeb said. “Figuring out a way to score in transition a little bit more. I thought that at the end of the first quarter, end of the second quarter, we went on good runs to where we got some leak outs, some points off turnovers that I think we needed. It gave us a little momentum boost.”

When you look at the score, it seems like a wire-to-wire victory, but that was not the case, as Kelly came out aggressive in the first period.

Kelly scored the first four points of the game and was about to make six points in-a-row.

Junior Alaney Moore missed her first layup, but stayed with the ball, gathered the rebound, and got her second-chance shot to go while drawing the foul. However, the official did not count the basket at the scorers' table, waving the shot off altogether, and keeping Kelly ahead at 4-0, with 6:39 left.

From there, the Lady Eagles got on the board, after junior Alivia Hartman dribbled to the high post, and found fellow sophomore Ayannah Ruff for a three-pointer from the top of the arc, cutting the lead to one, at 4-3.

Still holding on to a lead, NMCC tied the game at nine, after a Kelly turnover resulted in a Jimmya Caldwell-Newsom layup at the other end.

Then, with 3:50 left in the period, the Lady Eagles took their first lead of the contest, 11-9, after Caldwell-Newsom tried to dribble near the basket, but bobbled the ball, still managed to gather it and dished it off to junior Shakyra Wright for a layup.

The Lady Eagles only managed to lead 16-15 after the first, which was how Kelly head coach Darrin Pruitt wanted his team to play like at that start.

“I told them at the beginning of the game that if we want to win this ballgame, we’re going to have to come out strong,” Pruitt said. “That’s kind of what we did.”

One thing led to another in the second quarter, and Kelly eventually found itself in a hole.

With 7:04 left, Ruff scored her second basket in-a-row, after a turnover led to a leak-out and layup at the other end, to make it a five-point game, 20-15.

Then, after a turnover turned into an easy layup for Hartman, Ruff would make it a nine-point game. After Kelly missed a shot, NMCC came away with the rebound, and Ruff finished it off with a layup.

Ruff finished with nine of her 23 points in the second period. Wright also had nine and led the team with 26 points.

“I think what we did better was get into passing lanes,” said Heeb of his team’s second quarter. “We were stagnant at the beginning of the first quarter — took us a little while to get going — then we started reading the ball a little bit better, and once we did that, we got running and moving. Playing our style and once we saw the ball go through, we got even hungrier and kept doing it.”

NMCC outscored Kelly 28-14 in the period.

Coming out of the break, the Lady Eagles used that same aggressiveness and never let up.

Ruff scored back-to-back baskets, off turnovers once again, at one point during the frame; a quarter that saw the Lady Eagles only allow three made field goals.

Leading by 24 after three, Kelly needed a major comeback, but never got much closer, with turnovers being the main point of emphasis. The Lady Hawks finished with 24.

“We were just making bad passes,” Pruitt said. “We’re just lobbing the ball through the air, and anytime the ball is in the air for a long time, they’re going to pick it off. They’re quick, and then they have someone standing back, and we weren’t getting back.”

For Kelly, Moore led all scorers with 27 points and 10 rebounds. Junior Allison Owens also reached double-figures, with 11 points, while also coming away with three steals.

Thursday’s game was also senior night for the Lady Eagles, with the lone senior — Shania Word — getting recognized before the game with her family.

“She’s a good person to have around,” Heeb said. “Somebody that’s always there. Positive, supportive, good teammate, and just what you want in a kid that doesn’t play a lot.”

District tournaments begin for both Class 3 teams next Saturday. NMCC travels to Kennett for Class 3, District 1, and earned the No. 1 seed.

Kelly travels to Fredericktown for Class 3, District 2, and earned the No. 4 seed.