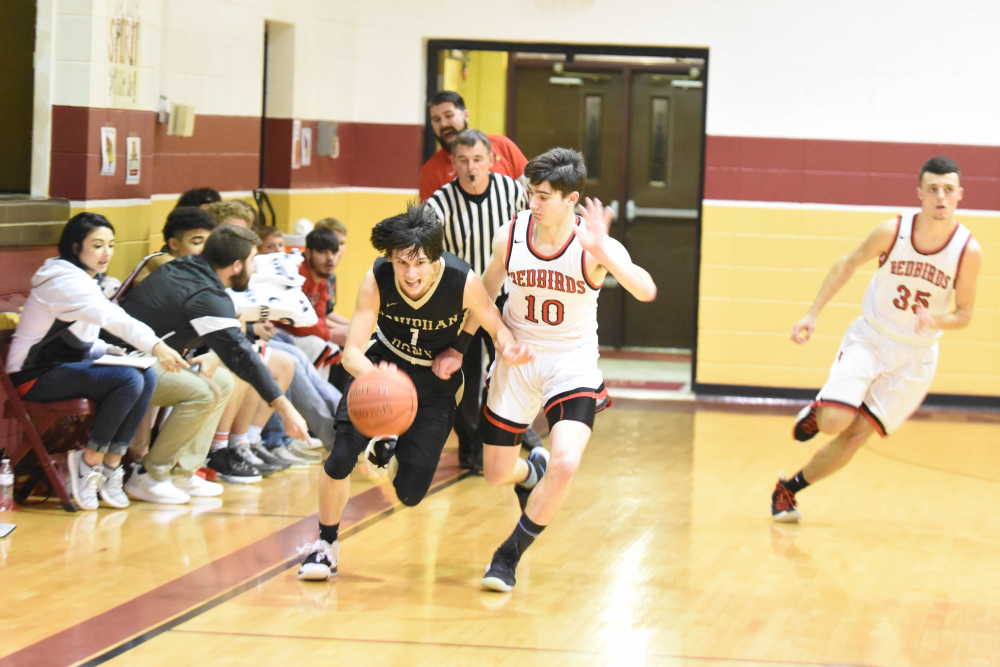 Doniphan's Tristian Bryant (1) dribbles up the sideline while being guarded by East Carter's Dalton Rudd (10) and the East Carter bench indicating that Bryant stepped out of bounds during the Ozark Foothills Conference Tournament semifinals on Tuesday, Feb. 11, 2020, in Neelyville, Mo.
Order this photo

NEELYVILLE - Neither team held a double-digit lead. In the third quarter, neither team even held a two-possession lead.

In a game destined to go down to the wire, East Carter led by three points with 13 seconds left and Doniphan's ball.

After a timeout, Doniphan ran a set to try and get Ethan Jones open, coming off a pick the picker play, but East Carter defended it and after Jones wasn't open for a shot, the Dons tuned it over with 3 seconds left.

"They did a good job guarding it. We've gotten it all year, that pick the picker up top, and they guarded him well on that and he didn't have a shot," Doniphan coach Daniel Cagle said. "We had a chance. We had a 1-point lead with 40-some seconds to go and things just didn't fall our way."

East Carter got the inbounds to Dalton Rudd, who made two more free throws to ice the game and deliver the 50-45 win for East Carter.

"We had multiple opportunities when we didn't get a call here or there. Kids weren't making shots, got fouls called that they didn't think were fouls. They could have given up and they didn't. They hung together and they got some clutch stops when we needed to," East Carter coach Jordan Penn said. "We've got a bunch of seniors who were playing there late and they just gritted up and got some stops.

It kind of gave our kids a little hope that we are right in this thing and here is our opportunity to go take it."

There were four ties in the fourth quarter but East Carter didn't retake the lead until the final minute of the game.

The second-seeded Redbirds were down by three when the Doniphan bench was called for a technical foul. Boyer made one of the free throws and then Rudd sank a midrange jumper to tie the game. With a minute to go, Boyer found Caden Foster under the basket t o put East Carter in front.

Orie Owen, who had 15 points despite not playing in the first half, got a three-point play for Doniphan (12-12) to retake the lead, but East Carter answered with a basket less than 10 seconds later for another lead change.

East Carter then got a stop with 13 seconds left and Doniphan immediately fouled Rudd.

He made both free throws, putting East Carter ahead by three, and setting up the final play of the game.

East Carter will face top-seeded Neelyville in the finals at 8:30 p.m. Friday at the Libla Family Sports Complex while the third-seeded Dons will play Clearwater in the third-place game at 8:30 p.m. on Thursday in Neelyville.

East Carter beat Neelyville 66-34 in the finals of the Clarkton Christmas Tournament and lost at Neelyville 51-47 on Jan. 28.

This will be the third tournament championship East Carter will play for this season. Including the Clarkton Christmas Tournament, the Redbirds lost to South Iron in the Black River League Tournament finals.

"Our kids are fired up. We let a championship slip through our hands against South Iron at the BRL and we're just excited to go get an opportunity to play in the Libla facility and get a chance to play against a good team in Neelyville," Penn said.