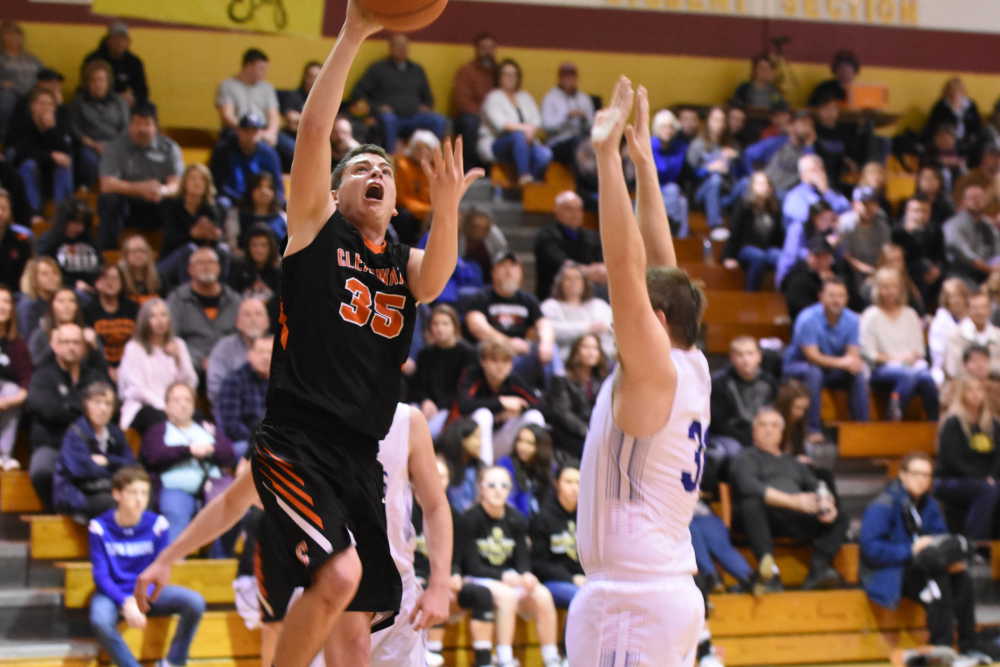 Clearwaters' Austin Grimes (35) tries for a layup while being guarded by Twin Rivers' Brandon Tompkins during the first round of the Ozark Foothills Conference Tournament on Saturday, Feb. 8, 2020, in Neelyville, Mo.
DAILY AMERICAN REPUBLIC/Scott Borkgren
Order this photo

NEELYVILLE - Clearwater used a seven-point run late in the fourth quarter and held on to advance in the Ozark Foothills Conference Tournament.

The fifth-seeded Tigers held fourth-seeded Twin Rivers to five points in the third quarter and went on to win 49-44 in the first round Saturday in Neelyville.

"Our defense really picked up. That's one of our best defensive games we've had in a long time. Just to get out and play hard on defense, and that leads to transition buckets was, was huge for us," Clearwater coach Zac Moore said.

Down a point with 3 1/2 minutes left in the game, Clearwater (11-10) got to the foul line four times over the next couple minutes while holding the Royals scoreless to take a five-point lead.

Off a timeout with a minute left, Clearwater had the ball out of bounds on the side on their end of the court.

Somehow, Karson Fay disappeared near his own bench and the defense didn't guard him. A long inbounds pass found him under the basket for an easy layup that put the Tigers ahead by seven.

"He's one of the smallest guys on the floor and just kind of hid back in the corner. They didn't find him and he just slid right in behind them and got an easy layup," Moore said.

Miller Gehrke drew a quick foul for the Royals that also fouled out Taylor Hicks, who finished the game with a team-high 15 points and had several key turnovers late.

Gehrke made both free throws and the Royals (7-15) fouled late to extend the game, but Fay and Austin Grimes each went 2 for 2 to maintain that five-point lead until the final buzzer.

"They got loose a couple times and then we had to extend a little bit and try to make some things happen," Twin Rivers coach Seth McBroom said. "We tried to change the pace a little bit. They did a pretty good job of handling it and executing."

We definitely had trouble scoring."

Parker Watson led Twin Rivers with 13 points and Gehrke had 10.

The Royals had an 11-2 run the second quarter to go ahead by nine, the biggest lead of the game.

Gehrke had back-to-back baskets to give Twin Rivers the lead and then Brandon Tompkins and Gehrke got putbacks.

The Tigers, though, would tie it up heading into the locker room.

Benton Lashley followed Watson's 3 with one of his own, Hicks scored, then Gage Keller and Grimes finished turnovers with a layup to tie the game.

It was part of a 13-minute stretch where Twin Rivers scored five points and went from up by nine to down by five with 6 minutes left in the game.

"We had 20-plus turnovers," McBroom said. "If you go back and think about it, it is pretty simple. When you turn the ball over, even when they don't convert on it, but when you have empty opportunities you are not going to win."

Still, the Royals would take the lead one last time after Brent Trout made a pair of free throws with 3:21 on the clock. The lead lasted nine seconds.

Ahead by seven at halftime, the second-seeded Dons (12-11) outscored seventh-seeded Greenville 24-12 in the third quarter to take control of the game.

Ethan Jones led Doniphan with 23 points and didn't score in the fourth quarter. Orie Owen had 17 points and was 5 for 5 on free throws and Levi Rawlings got 12 points.

Greenville (5-13) was held to five points in the first quarter but bounced back with 14 in the second to keep the game close. Jagger Robinson finished with 18 points to lead the Bears and Gunner Meloy had 12.

Doniphan advances to play third-seeded Naylor in the semifinals at 8:30 p.m. Monday.

Dalton Rudd led the second-seeded Redbirds with 21 points and four rebounds. Levi Boyer got a double-double with 20 points and 10 rebounds while Preston Golden had 14 points, six rebounds, four assists and three steals.

Doniphan's relentless pressure didn't lead to offense early, but it got there.

The second-seeded Donettes scored seven points through the first five minutes of the game and held a five-point lead. But they would ultimately score 16 points in the first quarter, 17 in the second and 22 in the third before pulling back with a 28-point lead heading into the fourth.

Second-seeded Doniphan held seventh-seeded Clearwater (4-14) to two points in the first quarter and allowed seven field goals in the game.

Emily Ederer led Doniphan (16-6) with 12 points, including eight in the first quarter. Timber Turner had 11 and Brooklyn Klepzig added 10. Nine different Donettes scored in the game.

Doniphan advances to play third-seeded Naylor in the semifinals at 8:30 p.m. Monday.

It upset was brewing after the first quarter, and then squashed.

The third-seeded Eagles (13-8) were trailing 14-11 after the first quarter. Matti Allen made a pair of 3s and scored 11 of Greenville's first 14 points. But then sixth-seeded Naylor outscored Greenville 32-5 in the second quarter and 21-8 in the third to go ahead by 37 points.

Ebby Moman had 15 points in the middle two quarters for Naylor and led all scorers with 21 points. Kaylynn Johnson and Faith Sullivan both finished with 10.

Allen got two more field goals after her strong start to finish with 15 points for Greenville (2-19).

Ahead by a point with 6 1/2 minutes left in the second quarter, fifth-seeded Twin Rivers got fourth-seeded East Carter in the bonus and added seven free throws in the final few minutes to take a double-digit lead.

The Redbird offense got two field goals in the final 6 1/2 minutes of the quarter to go into halftime trailing 22-14.

A significant lead in a low-scoring game, it still didn't last long.

With 17 seconds left, Moore grabbed an offensive rebound, was fouled on the putback, and made a free throw to cut the lead to a point heading into the fourth quarter.

A minute into the fourth quarter, Moore caught a pass on the block, turned and shot to give East Carter the lead.

Twin Rivers was able to rebuild its 10-point lead for the first time since the second quarter with just under a minute to go in the fourth quarter and held the ball for the final 40 seconds to win.

Both offenses were slow in the early going. It was tied at 2 after the first 4 minutes, tied at 4 after 6 minutes, and tied at six at the end of the first quarter.

There would be one more tie, at eight points, before Britney Croy made a 3 for East Carter.