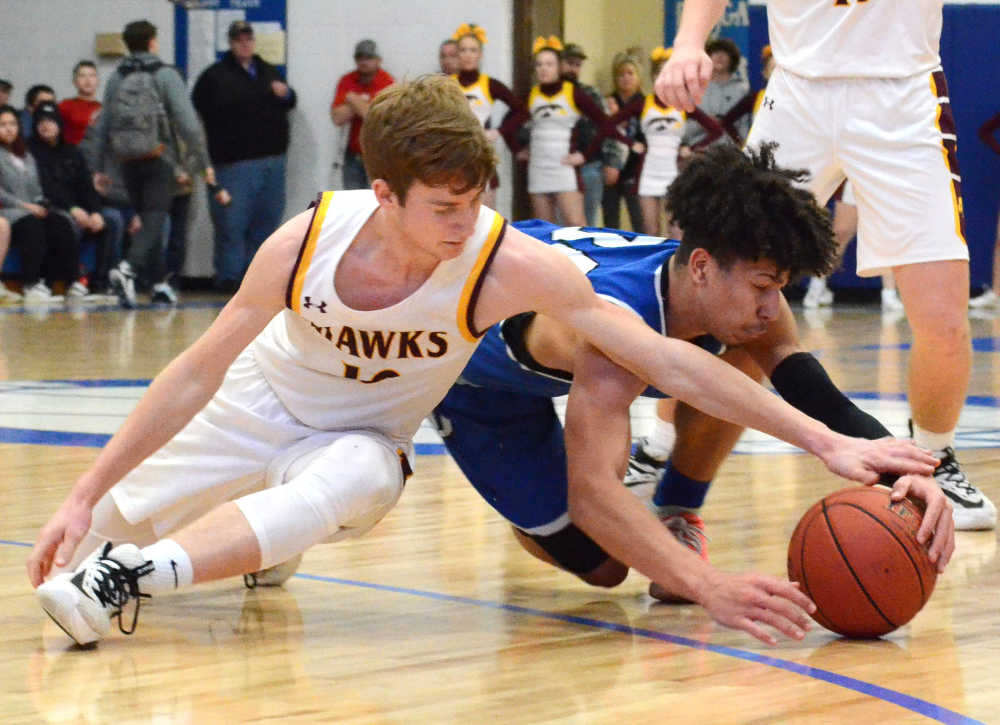 DELTA, Mo – It was always going to be hard for Delta and Kelly to top their first meeting this season when the Bobcats topped the Hawks on a buzzer-beater to play the spoiler homecoming.

That didn’t mean Delta wasn’t going to give it a try, rallying back from a 20-point halftime deficit to close within a possession of Kelly in the closing minutes of the Scott-Mississippi Conference tournament finals Friday night.

Ultimately the Hawks would hold on to not only get revenge on the Bobcats on their home court, 86-82 but also capture the conference crown after coming into the tournament a heavy underdog as the fifth seed.

“I was just in the locker room talking to the boys,” Kelly head coach Fred Johnson said. “Where we started and where we’re at now is unbelievable. These boys have been through some pretty rugged practices.

“Sometimes they don’t listen like they weren’t for a while, then when the game got on the line, they started paying attention and doing what was asked.”

Unlike their last meeting with the second-seeded Bobcats (19-4), where neither team led by double-digits at any point, the Hawks jumped on the Bobcats early.

Using a 14-2 second-quarter run, Kelly was able to take a comfortable 47-27 lead into halftime.

Joel McClain and Bruce Morgan combined for 29 points in the half, helping the Hawks score 18 of the final 24 points and making a turbo-clock finish look like a distinct possibility.

Almost as quickly as they dug their hole, however, Delta started to dig back out to start the third quarter.

A Jon Bod 3-pointer ignited a run of 10-straight points by the Bobcats to open the half and cut their deficit in half.

Kelly’s lead was back up to 15 points, 69-54, entering the fourth, but Delta was far from finished.

“I have to do a better job getting us prepared for that first half to come out and strike,” Bobcat’s head coach Chris Hahn said. “We were sluggish. The second half, we came out, and I can’t say enough, my kids. They worked their butts off. Our guys decided to do what we do.

“They started to get more comfortable with the atmosphere. They worked their butts off. That was the difference between the second half and the first.”

Midway through the fourth Delta’s deficit still stood in the double digits, 77-67, only for a 3-pointer from Evan Bartels to get followed by a steal and layup Isaiah Thomas to close within two possessions.

Back-to-back layups from Eric Berry had the Bobcats within a basket, 78-76, with 1:32 remaining.

With no room for error, however, missed shots on Delta’s next several possessions allowed Kelly to hit a pair of free throws and get a basket from Joel McClain, making it a six-point game with 44 seconds to play.

Forced to foul, the Bobcats watched the Hawks hit their final four free throws of the night while missing several three attempts of their won to seal the upset.

“The first half they did what I asked them to,” Johnson said. “They hit the middle and split. They worked our press breaker, and in the second half, sometimes you get a lead and blow it by thinking we can win right now.

“You’re not going to win with one shot. It’s a series of shots. They were reaching and hacking pretty good, but that’s all part of it. You have to be tough with the ball.”

Not helping Delta’s cause, several starters were in foul trouble by the start of the fourth quarter.

Grant Coomer, Colby Crader, and Berry all finished the night with four fouls while reserve Dale Lincoln fouled out.

“We play nine, and it hurt in the first half with Coomer picking up three,” Hahn said. “That forced Crader and Berry to play longer stretches. If we can stay out of foul trouble, we’re a pretty good team.

“Just like anyone else, if you get a lot of guys with three fouls in the first half, it’s stretching you thin.”

Thomas led Delta with a game-high 30 points while Crader was close behind with 29 points. Bartels was the third Bobcat in double-digits with 12 points.

Five Hawks ended the night in double-figures with McClain’s 22 points leading the way, Drew Dirnberger adding 17 points to the cause.

Devin Heuring and Bryce Morgan finished with 15 and 14 points, respectively.