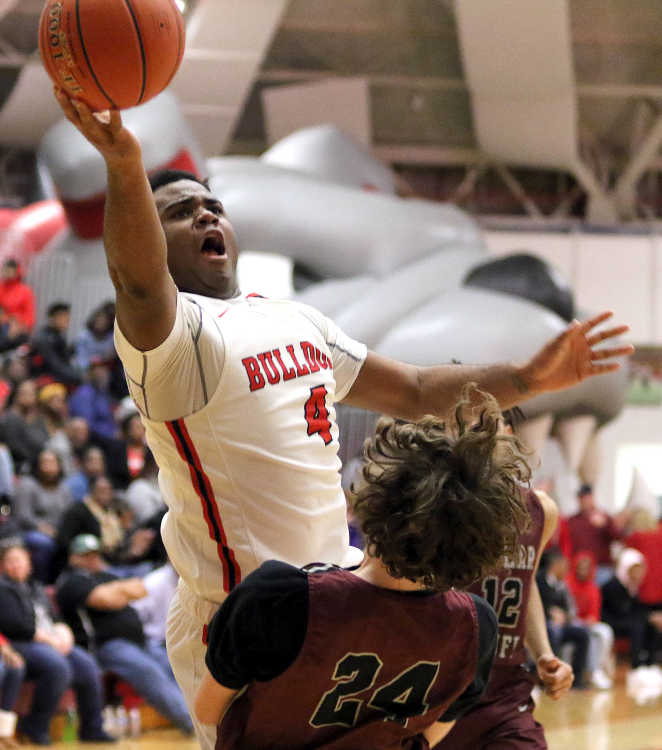 Sikeston (11-6, 3-2 SEMO Conference) outscored the Mules in three of the four quarters, en route to an 86-64 win. The point total for the Bulldogs marked the fourth time this season that they eclipsed 80-plus points, and it was also the second highest-scoring game of the season, as well.

“I thought we came out with great intensity,” Sikeston head coach Gregg Holifield said. “Defensively, had good pressure on-the-basketball, and I thought offensively, we shared the ball well. We did a good job off penetration and dumping down, and I thought our guys played well.”

After cutting the Bulldogs lead to one, at 6-5 on a dunk from Kendrick Brown, Sikeston began to separate itself from Poplar Bluff (6-10, 2-3 SEMO Conference), as senior Clark Steward scored the games next four points — all in the paint — to push the lead to 11-5 with 3:30 left. 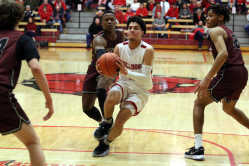 Then, one minute later, senior Payton Howard found an opening in the Mules defense, got to the rim and converted his layup attempt while drawing a foul to push the lead to 13-5.

Despite missing the free-throw, junior Leroy Atkins secured the rebound and kicked it out to senior Colby Henson for a three that pushed the lead to double-digits, at 16-5 with 2:15 left.

Poplar Bluff then called a timeout with 2:08 left, after Atkins hit a three-pointer of his own to make the score 19-5.

An energetic crowd at the Field House made their presence felt after the Mules’ timeout, and Sikeston continued to feed off that for the rest of the night.

“A lot of that has to do with how Bluff plays and how we play,” Holifield said. “We’re both very aggressive. We’re both very up-tempo, full-court pressure, and I think that they have a chance to do some really good things.”

After the timeout, Poplar Bluff ended the run, as Chance Campbell hit a pair of free throws with 1:36 left.

Poplar Bluff would then go on a short 5-0 run to end the quarter after Brown missed his initial shot, but after the Mules secured the rebound, Brown got another opportunity to score. He would hit a three-pointer from the right-wing, to make the game 21-10, with under one minute to go in the frame.

Then, before the period ended, Marquis Johnson connected on a short jumper in the paint for the Mules, providing the final points of the period, with Poplar Bluff trailing by nine.

The Bulldogs forced nine turnovers through the first eight minutes and caused major fits for the guests.

After cutting the lead to nine, Sikeston built its lead back up to double-digits to start the second quarter.

Henson drained a three-pointer to start, while Howard followed that up by getting his layup to fall, while drawing the foul, to bring the Bulldogs lead to 26-12.

Continuing to try and claw back, Poplar Bluff cut the lead to 11 with 6:16 left, after Joseph Hardimon probed the lane and found Campbell on an excellent pass. Campbell converted on his layup attempt while drawing the foul in doing so, to head to the line for a three-point play opportunity — which he would make.

Sikeston, though, always seemed to have an answer.

After Henson air-balled a three-pointer from the right corner, senior Nick Harrison was in a good position to rebound the ball and put it right back up, while drawing another foul, for an and-one opportunity of his own. He missed his free-throw, however, to keep the lead at 28-17, with 6:03 left.

The highlight-style plays continued for the Bulldogs, as with 5:20 left in the quarter, senior Clark Steward found junior Lontas McClinton for a layup off an out-of-bounds action. McClinton’s bucket increased the lead to 32-17.

Then, with time winding down in the first half, Howard showed off his speed as he drove toward the basket, and nearly got his layup attempt to fall, while drawing another foul. He made both of his shots from the charity stripe, and the Bulldogs headed into the locker room with a hefty 18-point lead, 46-28.

The St. Louis University baseball commit now sits with 1,016 points for his career and said that practice during the week helped him gear toward what was coming on Friday night.

“The pace that we go at during practice allows us to attack,” Howard said. “I give props to our JV for playing good defense on us, and that made it a lot easier for us to work on it in practice.”

Steward had 15 points and neared a triple-double with eight rebounds and six assists. He also added two blocks.

Leroy Atkins had 14 points and was 2 of 4 from three-point range, while Lontas McClinton, Kenyon Smith, and Harrison each had 10.

“We try to make an emphasis on sharing the basketball,” Holifield said. “I thought our guys had a great week of practice and did some good things. We’ve been intense, and our guys have followed suit. We really try to emphasize sharing the ball offensively, and really being aggressive defensively. We put a big emphasis on rebounding, and our guys did a good job in all three directions.”

Brown led Poplar Bluff with a game-high 19 points, on 8 of 19 shooting, and neared a double-double with nine rebounds.

Overall, Mules head coach Will Durden was happy with how Brown played.

“I think he played hard,” Durden said. “It’s kind of one of the reasons why we left him in, and we thought he played with a lot of energy tonight. He battled, and he did some of the things we wanted him to do, and he was trying hard to guard. We hope to see more out of him consistently like that, and I think we’ll be a lot better down the road.”

Sikeston continued it’s impressive winning streak over Poplar Bluff to 14-straight victories and 19 of 20. The Mules have not defeated the Bulldogs since the 2009 season.