MOMENTUM SWING: Momentum shifts in the second half, as Sikeston rallies from an early deficit to beat Neelyville 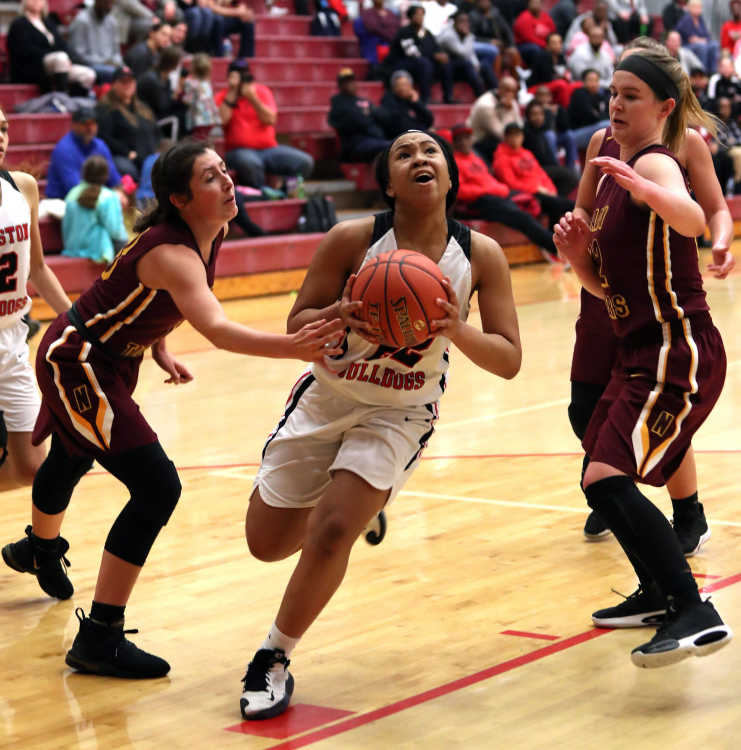 The Lady Bulldogs were down 16-5, after a 16-0 run from Neelyville (16-4), but that still didn’t bother the home team, as Sikeston rallied to win by double-digits, 60-48, on Tuesday at the Sikeston Field House.

After opening the game on a 5-0 run, the Lady Tigers turned up the gas.

Makenzi Davis scored six points during the run, while Payton Reinbott and Lexi Liau each had five.

Sophomore Karris Allen ended the run — with 30 seconds left in the frame — after Amyari Blissett missed a layup, leading to the long-armed Allen gathering the miss and converting to make the period’s total.

“We just kind of switched gears,” said Sikeston head coach Alisha Wills after falling behind early. “We talked about how we got to play a quicker game. As soon as we were inbounding the ball, they were blitzing us and putting so much pressure in the front. So, just some readjustment on our part — handling the ball, getting the ball up-the-floor, and just looking to get into our style of play is what changed the momentum for us.”

Allen got into the paint and made a shot from the free-throw line to cut the lead to seven, at 16-9. She finished with 19 points, on 8 of 16 shooting, and added 13 rebounds for a double-double.

She also led the charge for the Lady Bulldogs in the period that saw them cut the Neelyville lead to three, 23-20, with 2:51 left. During that stretch, Sikeston allowed seven points, led by Allen’s eight.

Then later in the frame, Sikeston cut it to three again, at 25-22, after Blissett scored on a layup off a turnover — a sequence that ended after three-straight turnovers between both sides.

“She was a huge factor for us,” said Wills of Blissett. “She’s a tough one, and despite her size, she’s going to battle her way in, and she’s going to make things happen.”

Blissett would give Sikeston it’s first lead since the first quarter, in the third, after hitting a three-pointer from the right-wing that put the Lady Bulldogs ahead, at 29-27.

Her three capped a 7-0 run for Sikeston to start the second-half before Neelyville answered back quickly to tie the game at 29.

Always reliable, senior Taydrianna Barnett would then give Sikeston its second-straight lead, on a layup, with 3:50 left. She finished with a game-high 22 points, on 9 of 23 shooting, and 12 rebounds.

Looking to build on its lead, Sikeston would grow it to four, after Allen got inside the perimeter on one-dribble, got her defender to bite on a ball-fake, and hit a mid-range jumper to make the score 33-29.

Continuing to battle, Neelyville cut the Sikeston lead to two points, at 35-33, before Allen displayed her court awareness, and found a streaking Barnett on a beautiful chest pass for a layup to increase the lead back to four.

Blissett then hit her second — and final — three-pointer of the game, from the right-wing, to push the lead to seven, at 40-33.

Sikeston ended the third frame up 42-35, outscoring Neelyville 20-8 in the period, and finished it on a high note. After Barnett missed a three-pointer, she managed to collect her miss and got her ensuing shot to drop off the backboard, to head into the final eight minutes ahead by seven.

When both Barnett and Allen are clicking, Sikeston can be a dangerous squad, and Wills acknowledged that after the game.

“I think tonight’s proof what we can be when we have everyone clicking,” Wills said. “The first couple of minutes, we were slow, but once we found our momentum, we never lost it. That’s the first key that I always tell them — the very first thing that I write on our board is all four quarters. It takes them playing all four quarters, and we’ve said it all season. They saw that tonight. They never let up, and they worked their tails off.”