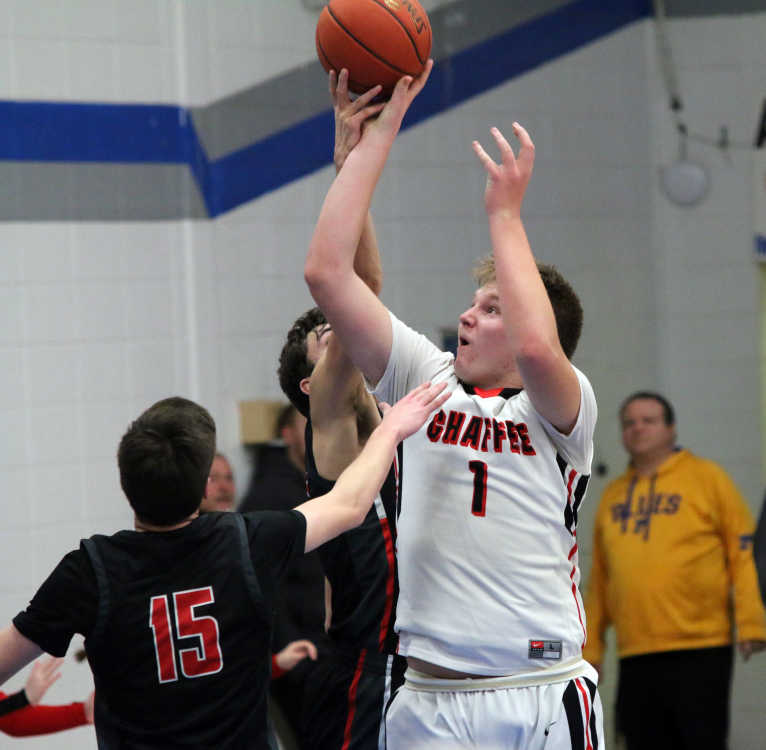 DELTA, Mo. — With 32 seconds left in regulation, East Prairie got the shot they wanted to tie the game up.

Harrison Moore got a wide-open look and buried his attempt from the left-wing, to tie the game at 49. Chaffee, though, still had one possession left to try to win the game — but couldn’t get it done — in the consolation semifinals of the Scott-Mississippi County Conference Tournament, at Delta High School, on Wednesday evening.

The Red Devils drove baseline and got a shot off that hit the edge of the rim and missed, but right into the hands of another Chaffee player. The No. 7 seed had another chance to win the game, but the ensuing attempt was well-contested by the No. 6-seeded Eagles, and also went off-the-mark, to force the game into an extra four minutes — which paid off for Chaffee as they went on to win 61-54.

Alec Brown started it off by driving to the paint and kicking the ball out to Brennan Fowler for a three-pointer from the left-wing.

Then, Wyatt Parker drove to the paint and got his floater to go down, while Fowler then drew the defense to him and dished off a beautiful pass to Jagger Salder for a layup to put Chaffee ahead, 56-49.

Struggling at the foul line kept the Eagles in the game down-the-stretch.

Chaffee shot 6 of 16 from the charity stripe in the fourth-and-overtime frames. They finished shooting 9 of 20 at the free-throw line.

East Prairie, on the other hand, converted on their free attempts during the waning moments. It shot 6 of 8 during the final two periods of the game, and 7 of 12 for the contest, yet still came up short in the end.

Jack Scruggs led East Prairie with 13 points. He was the only Eagle to reach double-figures.

Four other Eagles neared the mark, with nine points. Trea Cade, Jase Aycock, Evan Howell, and Moore all reached that total, while Garrison Scott had five.

Outside of Sadler’s game-high numbers for Chaffee, Brown finished with 13, and Fowler had 11. Brown hit four three-pointers in the game but was 1 of 5 at the foul line. Fowler hit a pair of perimeter jumpers and was a perfect 3 of 3 at the charity stripe.

Parker neared double-digits, with nine points. He also struggled from the free-throw line, shooting 1 of 5. Isaiah Fitzgerald rounded out the scoring for the Red Devils, with two. 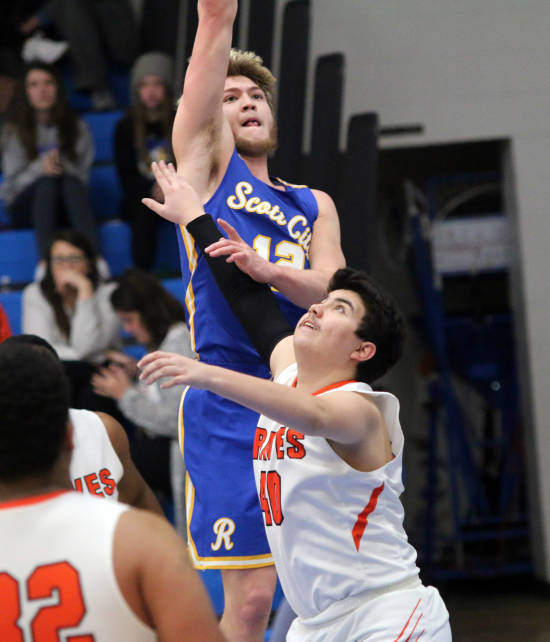 DELTA, Mo. — An early lead is all Scott City needed to blow by Scott County Central on Wednesday, in the consolation semifinals of the Scott-Mississippi County Conference Tournament, at Delta High School.

The Rams led 9-0 after Spencer Stratman nailed a three-pointer from the right-wing, and Joe Panagos slipped to the right block, sealed his man, and made an easy layup before the Braves even scored a point.

Scott County Central got on the board, with 5:53 left in the first quarter after Keshawn Sanders made both of his free-throw attempts.

However, Scott City still attacked the Braves, as they went on another run.

Kaden Mouser hit a three from the left corner, while Cayden Beussink rebounded a missed shot, and got the foul-plus-the-basket, for an and-one. His free-throw attempt, though, missed, as the Rams run went up to 7-0, along with a 16-2 lead.

Keron Banks ended the run, with 4:25 left, after a short shot in-the-paint was true, to cut the Scott City lead to 16-4.

Bralyn Porter led the Braves with 11 points, while Colton Vance had nine. Both Sanders and Demarion Maney each had six.

Panagos led Scott City with 19, while Camden Connor — who scored his 1,000 career point during the game — had 15. Ethan Pennington and Beussink each finished with 12 as well.