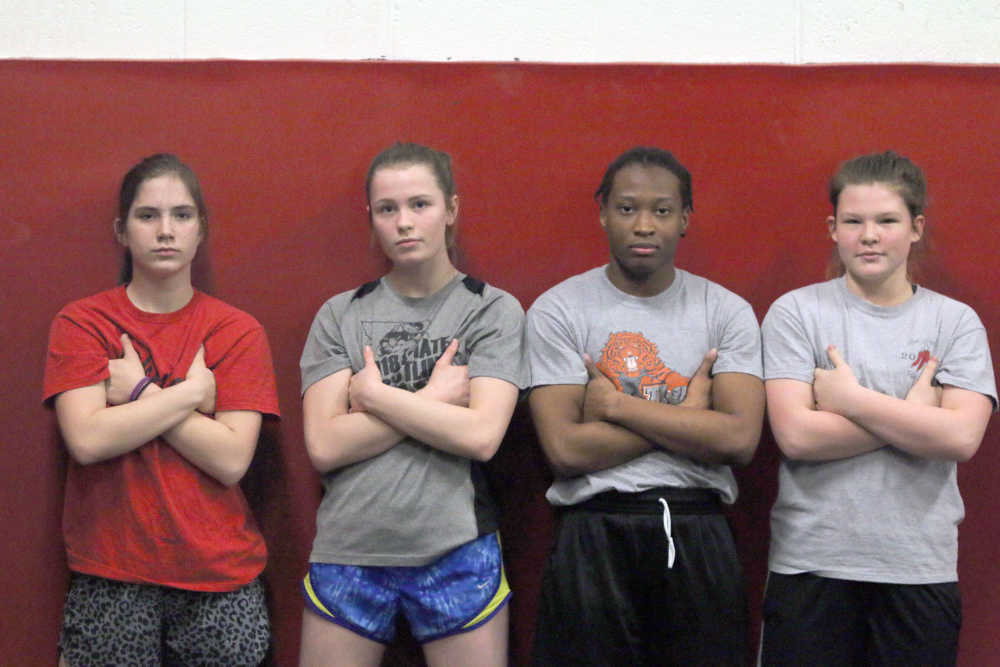 SIKESTON — Not one, not two, but three female Sikeston wrestlers earned first-place medals at the Girls SEMO Conference Tournament over the weekend at Jackson High School.

Senior Cherei Jones and sophomores Kate Grubbs and Lila Eckert all earned top honors in their respective weight classes, and all continued their impressive seasons as well. Fellow sophomore Haylee Raithel did not win a match in her bracket and finished fourth.

The lone upperclassmen of the group, Jones continues to dominate her way through every tournament where she has seen competition. She has 23 pins this season and a perfect 31-0 record.

Pinning is something that Jones enjoys, and after last season — where she got pinned in the first match of her career — she said that she was happy to rewrite the script.

“I got pinned, and I didn’t even know I got pinned,” Jones said. “I had no idea what happened, and then when I learned how to do that, I started to do, and I loved it. I love it, and I’ve just been doing it since.”

Over the weekend, Jones cruised her way through the 152-pound field.

In her first bout, Jones defeated Cape Central’s Tambriya Wilson, in 1:05. Then, she defeated Jackson’s Kayla Hodges, in 1:48, before wrestling unopposed in her final bout to earn first-place.

“I felt like I unlocked another me,” Jones said. “When you accomplish something, and then you feel like you can accomplish more, that’s how I feel. After doing all this, this year, winning, being undefeated, I want to accomplish more.”

For Grubbs, last season was one that was far from disappointing.

From her freshman campaign to her sophomore, Grubbs said that she’s more confident in her skill set, which has helped her improve.

Over the weekend, Grubbs started, by defeating Poplar Bluff’s Alexis Rowland, in 1:57.

She then wrestled unopposed in her semifinal match, and defeated North County’s Taizja Lawless, in 1:20, to earn first-place honors, and couldn’t be happier with the result.

“Winning it for the first time was pretty cool,” Grubbs said. “It’s never happened before, and it was our first year having that. It was pretty cool to have the experience to be the first 125-pounder to be a champion.”

Eckert was the final Bulldog to earn first place.

She defeated Poplar Bluff’s McKayla Brown, by pinfall — in 28 seconds — in her opening bout of the 135-pound bracket. Then after wrestling unopposed in her semifinal contest, she defeated Hillsboro’s Grace Johnson, by 9-6 decision, to win.

After a season where she finished 6-13 and got injured right before the district meet, Eckert said that she was nervous heading into the tournament.

“Being back in that gym, I was like, 'OK, that happened. Now, I just got to go out and dominate because I’m here, and I know I can do it, and this is what I want,'” Eckert said.

Improving by leaps-and-bounds, Eckert sits with a record of 21-7, and 14 pins this season. Last season, she finished with two pins.

Over the offseason, Eckert said that the coaching staff had helped her a lot, mainly with how she approaches each match and each opponent.

“Last year, I was getting in my way a lot,” Eckert said. “It wasn’t until the Cape tournament this year that I had that mindset flip. After that, confidence was what came out.”

Entering her first year of competition, Raithel has dealt with how to wrestle and what to do.

At 3-18, Raithel has one pin this season but said that she came into the year not knowing very much about the sport, but over time, has adjusted and now treats it differently.

“I’ve picked up technique, and now it’s just muscle movement,” Raithel said. “I’ve come along way because I barely knew what a shot was, and now I can finish my shots and get a takedown.”

Over the weekend, Raithel fell to Notre Dame’s Emma Steimle in 54 seconds, Hillsboro’s Kaitlyn Hindle in 2:48, and Poplar Bluff’s Demi Wisdom, in 1:04.

All four individuals look to continue their seasons on Friday and Saturday at the Class 1, District 1 Tournament. The event is at Hillsboro High School, with competition starting at 5:30 p.m., on Friday.

The top-four individuals earn medals, with plaques awarded to the top-two teams.