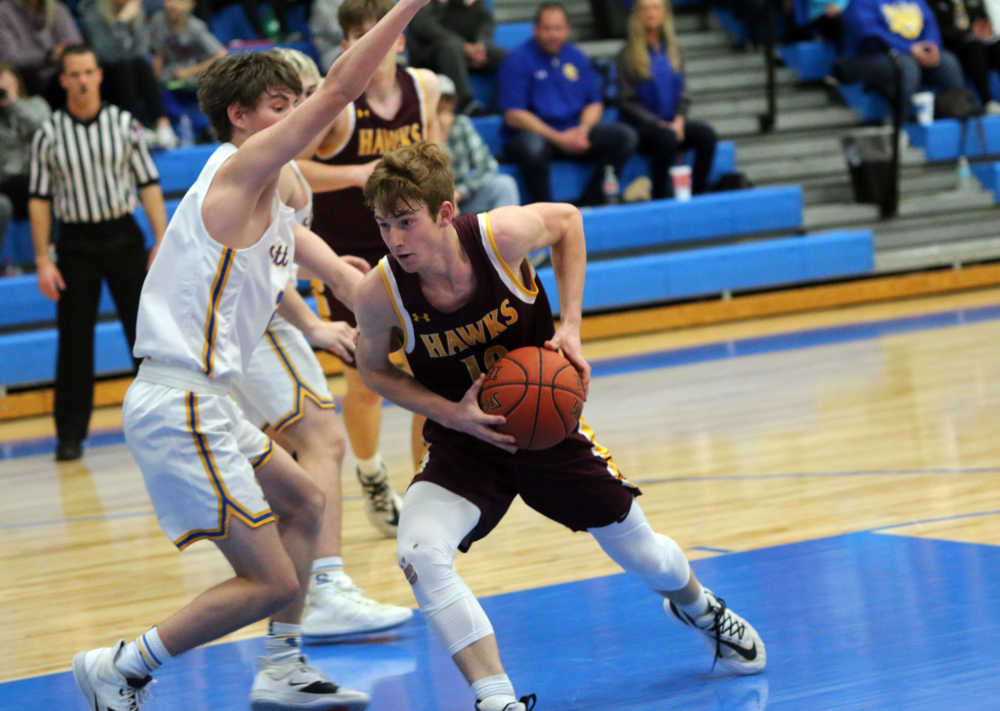 Kelly's Devin Heuring drives to the basket, against Scott City, on Saturday, Feb. 1, 2020, in the first round of the Scott-Mississippi County Conference Tournament, at Delta High School, in Delta, Mo.
Alex Wallner/Standard Democrat

Saturday marked the first day of the boys Scott-Mississippi County Conference Tournament, and it started with a bang, between No. 4 seed Scott City and No. 5 seed Kelly.

Not even 24 hours removed from a close loss at Oak Ridge, the Hawks staved off a Ram comeback toward the end of the game, to win 63-57 and advance to the semifinals. They will play Oran Tuesday at 6:30 p.m. at Delta after the No. 1 seed Eagles beat No. 8 seed Scott County Central 72-61 Saturday.

Hawk junior Drew Dirnberger started the run by stealing the ball and turning it into easy points the other way. Then, sophomore Gavin Jansen hit a three from the right-wing, to cut the Scott City lead to 6-5.

Senior Joe Panagos ended the short run from the Hawks, however, after converting a layup, to push the Rams lead out to three points, 8-5.

Later, Scott City got a big play from junior Camden Conner, who muscled his way into position for a rebound and converted it into an “and one,” which gave the Rams a 13-1 lead late in the opening period.

Kelly answered with an elongated run that lasted nearly halfway through the second quarter.

Jansen hit another three-pointer, while Dirnberger jump-stopped near the foul line and hit an extended jumper to provide the final five points of the first frame.

Junior Bryce Morgan opened the second quarter spotted up in the right corner and hit a 3-pointer, giving Kelly an 8-0 run and a 19-13 lead.

Jansen then buried another long-distance jumper, which extended the run to 11-0 and the lead to nine.

Sophomore Joel McClain provided the final points of the run, as he drove baseline and got an easy layup, to push the Hawks out to a double-digit lead.

After a Ram timeout, Conner ended the run, with a jumper from the right elbow that cut the deficit to 24-15.

He also ended the first half for the Rams, by nailing a 3-pointer from the left-wing which cut the Kelly lead to 10 at the break.

Conner would finish with a team-high 18 points.

Scott City made adjustments and came out ready to start the third quarter.

Junior Griffen Moore opened the period with an “and one,” which made it a 31-24 margin.

However, Kelly’s lone senior provided a burst to the team.

Devin Heuring scored four-straight points for the Hawks, after maneuvering his way into the paint, making a move, and getting a hook shot to go. After stealing the ball, Heuring drove to the rim, but the Rams would make him earn his points at the foul line. He made both shots from the charity stripe to push the lead back to 35-24.

Kelly would grow its lead to 13 after Dirnberger probed his way toward the basket and delivered an excellent pass to McClain for an uncontested layup.

Scott City responded, however, as senior Spencer Stratman nailed a 3-pointer from the top of the arc to trim his team’s deficit to 11 with 5:50 remaining. His shot also forced Kelly coach Fred Johnson to call a timeout. 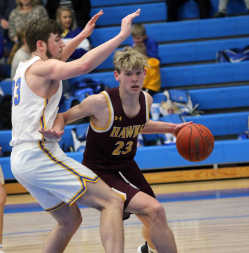 After the break, the Hawks got it rolling again as they found Jansen in the left corner. He drove his way to the rim and got a shot off that rolled around the rim and dropped. He also drew a foul while shooting and made the free-throw to put the Hawks up 40-26 with 5:33 left in the period.

With the clock ticking down, Scott City junior Ethan Pennington rebounded a Kelly miss and drove it nearly the length of the court. He heaved up a shot as time was expiring which banked in for a 49-37 margin.

Scott City eventually cut the Kelly lead to 59-51 in the fourth quarter, after Stratman missed a 3-pointer but Conner — yet again — was there to clean up the mess and convert on another “and one” attempt.

With 20.6 seconds remaining, Stratman hit a perimeter shot to cut the Hawk lead to 61-57.

Morgan, though, made it a two-possession contest, after knocking down a pair of free-throws, to equal the final total.

Morgan finished with 10 points to go with six rebounds, one assist, and a perfect 5-5 at the free-throw line.

Jansen led the Hawks with 19 points. He shot 7 of 11 from the floor, with three rebounds and one assist.

Dirnberger also finished in double-figures, with 12 and also had four rebounds, five assists, and four steals.

Heuring and McClain each added 11 points, as well. Heuring had three rebounds, seven assists, four steals, and one turnover.

McClain had a 5 of 8 shooting performance and added five rebounds.

Stratman scored 15 points in the defeat.