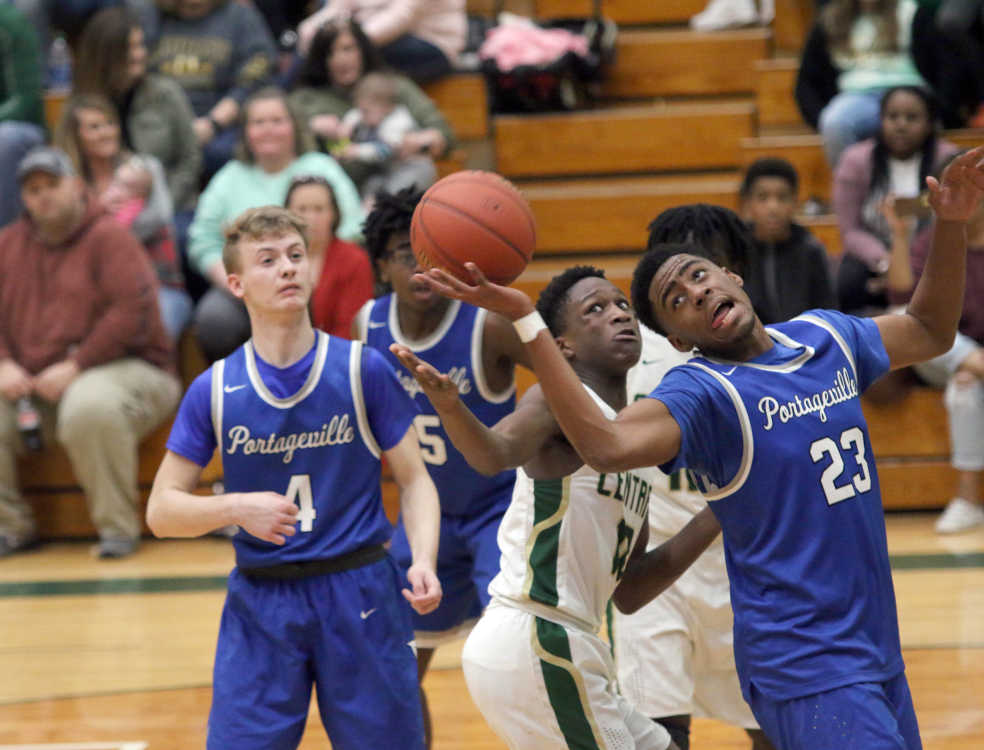 On Friday night, at New Madrid County Central High School, the Portageville boys basketball team lost in all three categories, as it fell to the Eagles 74-48.

“We still have a lot of work to do on rebounding, and it’s something that we’ve struggled with all year. New Madrid is so athletic that if we don’t block them out, you’re never going to get a rebound, and that’s what happened to us tonight.”

Driving to the rim and creating contact also seemed to be a problem for the Bulldogs. Portageville attempted four free-throws for the game — all by Kelan Bills — while NMCC got to the charity stripe 28 times.

Additionally, not allowing the Bulldogs to get any momentum also played a significant role.

The Eagles gave up single-digit scoring quarters in both frames in the first half. They won the first period 19-9, and the second 21-7.

Without looking, someone may assume that NMCC led wire-to-wire, but that was not the case.

Portageville led 5-0 to start the game after Drew Irby hit a three-pointer from the right corner and then dished off an assist to Bills for a layup that forced an Eagles timeout.

That early run woke the home team, though, and it showed the rest of the first period. Of the next 23 points scored, 19 were from an NMCC player.

The same story continued in the second quarter, as the Eagles did not make anything easy for the Bulldogs. Portageville ended the half with just seven field goals and got outrebounded 26-14.

Fittingly, the half ended after Bryshawn Williams drove into the lane and attempted a floating jumper. His shot went off-the-mark, however, but Ke’von Williams was there to snatch the rebound and put it right back up to end the half for the Eagles, up 40-16.

“I was so proud of these guys because of the work they put in defensively,” NMCC head coach Lennies McFerren said. “They took Portageville out of their game early. So, that was what I was most proud of out of them.”

Heading into Friday night, Irby said that making the Eagles get into a halfcourt offense, along with not allowing them to score off turnovers, were two primary keys highlighted.

What was asked, turned out to be the exact opposite in the end, as the Eagles continually got out in transition and created easy shots, either off turnovers or by gaining extra opportunities.

“We didn’t do a lot of that well,” Irby said. “I thought our kids competed. They’re a veteran team. They got a lot of big, strong kids and we’re playing a lot of sophomores. Credit to them, they did what they were supposed to do, and it was a tough night for us.”

Bryshawn Williams finished with 16 points and showed an aggressive side early-and-often.

Christen Phillips also finished in double-figures, with 16. He shot 7 of 11 from the floor and 2 of 3 from three-point range.

Lastly, Donnie Ray Brown finished with 12 points and was the fourth Eagles player to reach double-digits in scoring. He shot 5 of 11 from the floor and had seven rebounds.