A Jackson family and the NFL - a tale not often told 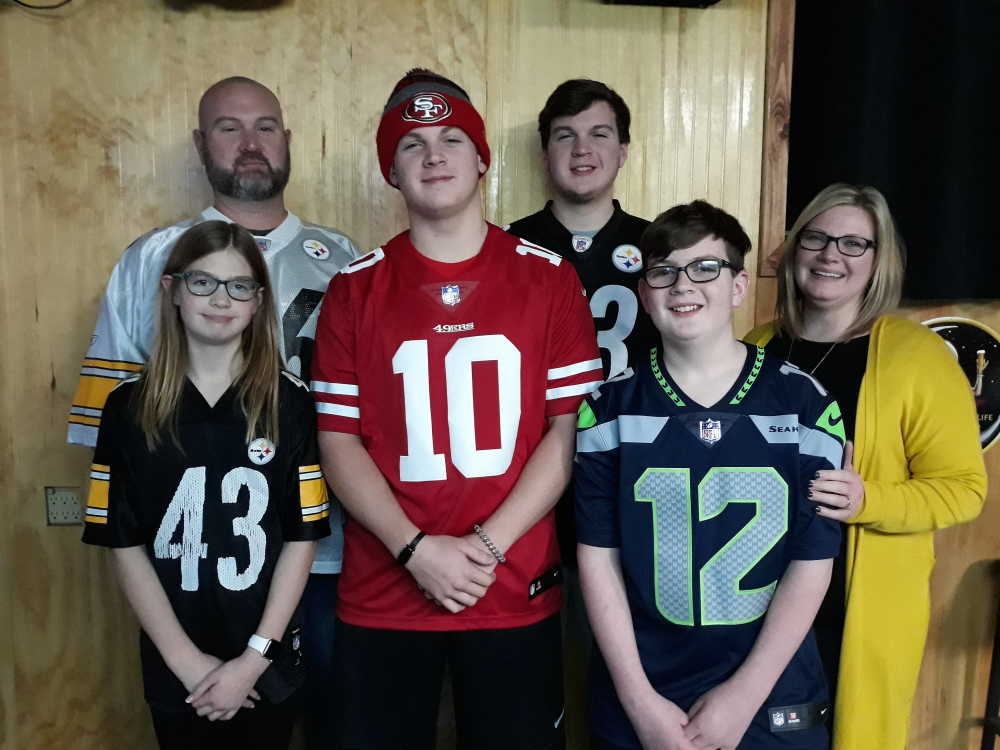 Chayton Bass of Jackson is just fine with people who don’t understand his affection for the 49ers.

Bass, 18, will be rooting for San Francisco in Sunday’s Super Bowl LIV, perhaps the only occasion in 21st-century American culture in which Roman numerals are used widely.

Chayton, a senior at Jackson High School, wore the jersey to Friday’s classes.

“The fact that Jackson’s (red and black) colors are similar (to San Francisco’s) helps,” said Chayton, who hopes for a career as a mechanical or civil engineer.

The Bass family loves the NFL but its individual members don’t support the same team.

Mom and Dad, Brandi and Matt, are longtime Steelers fans.

“I grew up a fan of the (football) Cardinals,” said Matt, “and then that idiot Bill Bidwill moved the team to Arizona.”

“Something drew me to the Steelers (after that),” he continued, “mostly Pittsburgh’s defense.”

Wife Brandi was drawn in by her husband’s enthusiasm for the black-and-gold.

Drawn in so much that the couple’s 16-year old is named Steeler.

No, this is not a misprint.

What's in a name

Listening to the couple explain the naming of their second son is a treat this reporter was happy to experience first-hand.

“But if we called him that,” Brandi responded, “his name would sound like a window.”

“And besides,” added Matt, “the guy later accidentally shot himself in the leg (in a New York nightclub in 2008).”

“Then we thought about naming him Hines,” said Matt, referring to another legendary Pittsburgh wide receiver, the now-retired Hines Ward.

Those who follow Steelers lore will know that the name of the stadium in which Pittsburgh plays is called Heinz Field.

Calling son #2 either Hines or Heinz seemed an elegant homophonic solution to the naming dilemma since it checked off more than one box for this Steeler-loving couple.

“But then, and I can just hear this,” said Brandi, “kids would start calling him ketchup in the hallway.”

A solution was found while Brandi was still pregnant.

“Matt would pass me and pat my stomach and say, ‘How’s my little Steeler doing’?” Brandi revealed.

Ding-ding-ding. We have a winner!

“Sometimes people make fun of it or think (my name) is a joke,” said Steeler Bass. “But I like it.”

The Bass family’s only daughter, 11-year old Bailey, a 6th grader, is also a fan of Pittsburgh’s team.

The youngest Bailey son, though, like big brother Chayton, broke ranks with his parents.

This is all very confusing.

Niners fan Chayton was turned on to the northern California team by his friend Nick Abbott.

“Nick was a Niners fan,” Chayton said, “and so I started rooting for them too.”

The oldest of the Bass brood said San Francisco wasn’t very good when he became a fan, but it felt good to support an underdog.

Chayton claimed to be a student of Niners history – but he wasn’t referring to mid-19th century Americana – namely, the rush by prospectors to northern California in 1849 when gold was discovered there.

No, Chayton meant something different by 49ers history.

Chayton says he doesn’t feel lonely being a Niners fan in Missouri, even though Southeast Missouri is arguably a stronghold of Chiefs Nation.

He admits he’s not aware of many people who share his rooting inclination.

“All I know is me and (Nick),” when asked how many other Niners fans he knows in this part of the world.

Reminded that it’s been half a century since Kansas City has won it all and that beloved head coach Andy Reid has never before hoisted a Lombardi Trophy, Chayton is unmoved.

“I’d root for the Chiefs if it weren’t for the 49ers,” Chayton offered.

If there is anything bringing unity to this fractured NFL family, it’s their obvious love and affection for one another.

Plus, one more thing.

The love of a (different) game

Chayton sports a 226 average, which he says is highest in the family – a boast that Mom and Dad gently dispute.

“Well, it’s the highest this week,” said Mom Brandi with a smile.

Chayton works at Jackson Lanes four days a week and does a little bit of everything there.

He works the front counter and the snack bar.

Chayton is the guy you call if a ball gets jammed, if fallen pins need to set back straight or if pins get stuck in the gutters. He’s been known to do some mechanical work on-site when needed too.

Chayton’s commitment to the sport is significant. For example, he can go into impressive detail about oil on the lanes, an aspect of this indoor sport that only the obsessed can truly follow.

As a player, Chayton is in league play two days weekly (one of those days in Imperial, Mo.) and participates monthly in a tournament monthly in St. Louis.

In July, Chayton will spend a week at a youth national bowling tournament in Las Vegas.

He plans to bowl in college, perhaps at Indiana Tech in Fort Wayne, In.

Getting down to brass tacks

Chayton will take a break from his favorite sport to watch a little football Sunday night.

As for a prediction, the eldest Bass child thinks it’ll be a close one.

“If our offense shows up, we’ve got a better shot, but no matter what, three points or greater.”

The Bass family patriarch, the Pittsburgh fan, is supportive.