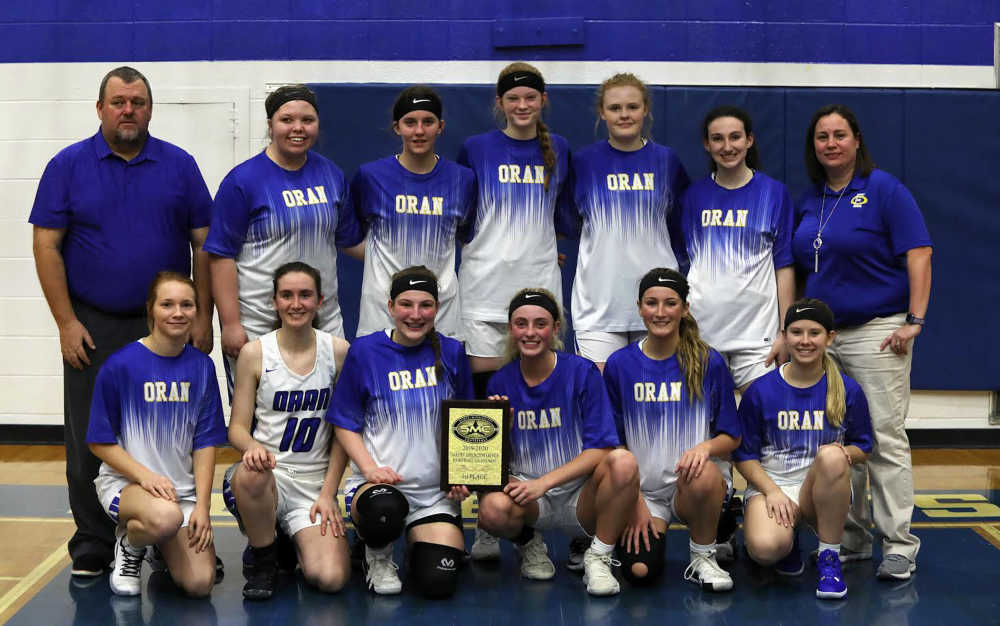 The Oran girls basketball team poses for a picture with the first-place plaque, after defeating Scott County Central, on Thursday, Jan. 30, 2020, in the championship game of the Scott-Mississippi County Conference Tournament, at Charleston High School, in Charleston, Mo.
Liza King/Standard Democrat

CHARLESTON, Mo. — Heading into the fourth quarter up five points, the Oran girls basketball team was in a much closer contest then they had hoped, against Scott County Central, in the Scott-Mississippi County championship game.

Her efforts though were not enough, in the end, as the Lady Eagles closed out a hard-fought 65-60 victory to claim their fifth-straight conference tournament championship.

“We’ve been blessed with some talent,” said Oran interim head coach Larry Boshell on his team’s string of success. “Winning breeds winning. They’re used to seeing everyone ahead of them win, so they don’t want to be the ones not to win it.”

Lead changes were plentiful early on in the fourth quarter.

Scott County Central regained the lead, with 6:55 left after Coffee found a cutting Micah Adams for a layup to put the Bravettes up 50-49.

However, that lead vanished quickly.

On the next possession, Oran senior Kaylee Payne caught the ball in the low-post and made a quick move around her defender, getting the shot off, while drawing a foul to put the Lady Eagles up 51-50. Her ensuing free-throw attempt went off the mark, however, to leave the score the same.

The Bravettes, though, returned the favor, as Coffee got the hoop-and-the-harm, to put the No. 3 seed up 52-51. She added her free-throw, to complete a successful and-one, as well, to make it 53-51.

After another made basket grew the Scott County Central lead to 55-51, Oran did not let that phase them.

Freshman Grace Davis provided some significant minutes — and plays — for the Lady Eagles down-the-stretch, especially at the charity stripe. Davis went 7 of 10 at the foul line in the final frame, including scoring four-straight points, that would knot the game up at 55.

Junior Katie Webb also played a big role late, as she would give Oran the lead right back, after making a short shot in-the-paint, that made it a 57-55 contest with 3:05 left.

Then, with 2:47 left, the Bravettes lost a key member to the rotation, after Davis drove the lane and got senior Rita Meeker to foul out after a getting assessed a blocking violation. Davis would make the back-end of her two foul attempts to increase the Oran lead to 58-55.

Once again, though, that lead would be erased, as senior Bre’Asia Jones hit an uncontested three-pointer from the left-wing to tie the game, with 2:15 left.

Staying aggressive, Davis continued to force her way into the paint and create opportunities to return to the foul line.

With 2:05 left, Davis would give Oran it’s final lead of the game, after knocking down a pair of free-throws to put the Lady Eagles up 60-58.

Davis added another basket after getting an offensive rebound and putting it back up for a layup that made the game a two-possession contest, 62-58. She finished with 13 points and six rebounds.

“Sometimes she gets lost, but she is just a natural at finding the ball,” Boshell said. “She’ll get into the right position to get a rebound. She does an excellent job for us, and she’s gotten better as the years went on.

“At the beginning of the year, we weren’t sure how much she would play. We knew she would play varsity, but we didn’t know how much. Right now, she gets a lot of playing time. She’s the sixth-man, but she plays starter minutes.”

Earlier in the season, Payne reached the 1,000-point plateau against the Bravettes, at Ronnie Cookson Gymnasium, scoring 17 in the process.

Topping that mark on Thursday night, Payne said that she knew, early, how she was going to score and added that having seen the Bravettes once before also played a role.

“I knew the first layup that went in, that they couldn’t guard me down low,” Payne said. “So, then I just started trying to get open down-low, and if they double-teamed me, I looked out to my other teammates and was hoping they’d do something productive.

“I knew what to expect on defense, not really on offense. You can come out, and you can shoot, be wide-open, and not make anything. So, then you have to drive.”

Outside of Davis and Payne, senior Taylor Lowes was the other Oran player to reach double-figures. She finished with 14 points, on 5 of 7 shooting, and 4 of 5 from three-point range.

Coffee was the Bravettes leading scorer, also with 22, on 9 of 20 shooting, and did almost all of her damage in the second half.

In the first half, Coffee managed only three points and one field goal. She erupted, though, after the break, and left her head coach smiling after the game.

“Sam has grown up a lot this year,” Scott County Central head coach Andrew Pullen said. “With us losing three from last year, she’s had to pick up the slack for some of them, and she just played excellent. Court-vision, she just played so hard, and I love that girl.”

Coffee wasn’t alone, though, as three other Bravettes reached double-figures as well. 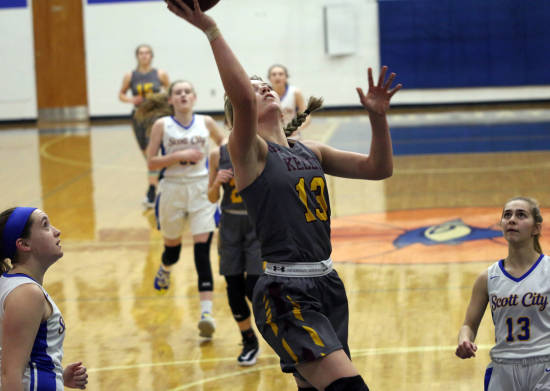 The Lady Hawks' initial run gave them a 7-3 advantage, before Scott City’s Aleah Morrill answered, with 4:32 left in the first quarter, to cut the deficit to two, at 7-5.

Kelly would then go on another run shortly after, that lasted the entirety of the frame, and into the second quarter, en route to a 60-41 win.

Allison Owens and Alaney Moore each highlighted the run. Owens hit a three-pointer from the left corner, and Moore converted a layup that gave Kelly a 12 point lead at 17-5.

Kacie Daigger ended the run, with 5:35 left in the first half after she nailed a pull-up jumper at the free-throw line, which cut the lead to 10. Daigger’s basket was the first points that Scott City made in the frame at the time.

The Owens and Moore combo was at it again toward the end of the first half as well. Owens would nail a three-pointer from the top of the key, and Moore followed up by beating her defender and getting an easy layup to increase their lead to 24-7.

Liza Dannenmueller would end the Kelly momentum, with 1:55 left in the first half, as she hit a three-pointer of her own from the right-wing, to cut the lead to 24-10.

In the second half, the Lady Rams continued to battle and showed no signs of quitting.

Scott City eventually cut the Kelly lead to single-digits, at 42-33, with just over two minutes remaining in the third quarter, before Allison Riley extended the lead back to double-figures, with a three-pointer from the right-wing, that made the score 45-34 with 1:30 left.

After rallying back, Scott City started the fourth quarter off by cutting the lead down to single-figures once again, as Dannenmueller hit a three from, also from the right-wing, that made the score 45-37 just over one minute into the period.

In the end, though, the early margin for Kelly was too much for Scott City to stave off.

Moore finished with another double-double and neared a triple-double, as she dropped a game-high 22 points, had 11 rebounds, and added eight steals. Owens finished with 21 points and made three three-pointers in the game as well.

Daigger finished with a team-high 13 points for Scott City, while Dannenmueller had 11. 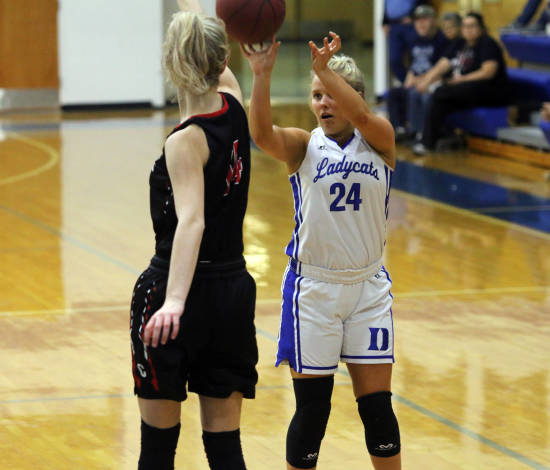 Never really getting out to a significant lead until the closing moments, both teams were neck-and-neck.

In the fourth quarter, Chaffee cut the Delta lead to one point, after Jayden Welch nailed a three-pointer from the left-wing, making it 35-34 with 4:15 left.

Delta, though, eventually pushed the lead out to 10 points with just over one minute left, but that was quickly pushed back down to single-figures after Braelyn Pobst drew a foul while making her shot for an and-one. She went on to make her foul shot, to make the score 44-37.

Pobst led all scorers with 14 points, while Welch and Brooke Kilburn neared her, in double-figures, with eight each.