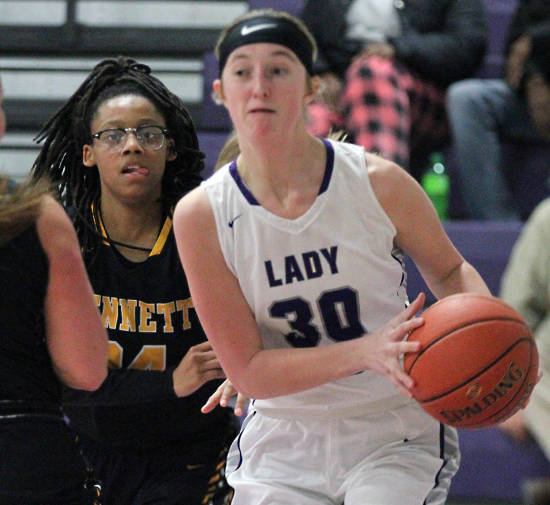 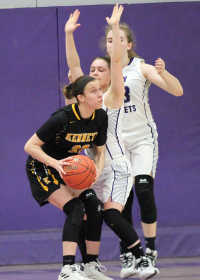 “We keep finding ways to win close games,” Kennett coach Aaron New said. “It’s kind of our M.O. Our girls don’t always play their best but continue to find a way to win the close ones.” 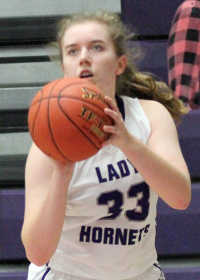 The Indians prevailed in another nail-biter Tuesday night. Kennett improved to 6-2 in games decided by less than 10 points as it edged the nearby Holcomb Hornets 36-35. 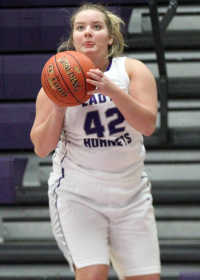 “Holcomb had a great game plan and their girls did a good job executing it,” New said. “In the second quarter, we were able to build a little bit of lead when we got the tempo where we wanted it for a few minutes. But then they came right back in the third quarter. It was a good battle. Holcomb played well tonight. We just happened to be one point better than them.” 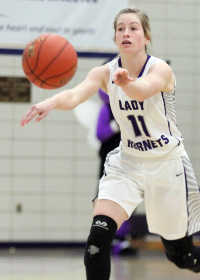 Kennett and Holcomb were tied at eight-all after 10 minutes of play before Kennett closed out the first half on a 10-2 run to take its largest lead of the game at 18-10.

Holcomb responded with its own 9-0 run to start the second half. The Hornets moved ahead 19-18 when Sarah Williams made a layup with 3:55 left in the third quarter.

Kennett junior guard Kaniya Madlock followed by knocking down three consecutive field goals to put Kennett back on top 25-19 by the end of the third quarter.

Holcomb got as close as one point twice in the fourth period. A 2-point bucket by Holcomb’s Bailey Cupples cut Kennett’s lead to 30-29 with 2:35 remaining.

Kennett sophomore guard Kyra Jaco responded by knocking down a 3-pointer and a 2-point basket to pad her team’s lead to 35-29 with 1:06 left.

Selena Burress, who hit all three of Holcomb’s treys, hit a 3-pointer with six seconds left to cut Kennett’s lead back to one possession at 35-32.

Caroline Patton followed by making one of two free throws after a timeout to give Kennett a 36-32 lead with five seconds left. Burress then drained another 3-pointer as the buzzer sounded to set the final score.

“Our girls battled hard and executed the game plan we had put together well,” Holcomb coach Alexa Stockton said. “We just came up one point short.”

Cupples set the tone early for the Hornets in their methodically patient offense. Cupples recorded six of her team-high 16 points in a low-scoring first quarter Holcomb won 6-5.

“We wanted to control the tempo,” Stockton said. “For the most, I feel like we did. They definitely went on a run in the second quarter. They also hit a few shots we didn’t plan on them hitting. But I felt like we kept the tempo at the pace we wanted it most of the game.”

Clutch shots by Madlock and Jaco helped halt Holcomb’s second-half rallies. Madlock scored all seven of Kennett’s third-quarter points on her way to a team-high 12 points. Jaco added eight of her 11 points in the final four minutes of play.

“They were face guarding Caroline all night,” New said. “Kaniya and Kyra stepped up and made shots when we needed them in the second half. That’s big because moving forward a lot of teams are probably going to guard Patton that way. If we can get those two to score more against Box and 1 defenses we will be able to put up more points.”

Stockton praised defenders Allison Moody and Sarah Williams for limiting Kennett’s leading scorer on the season to just one point.

“We wanted to hold Caroline Patton to five points tonight and Sarah Williams and Allison Moody found a way to hold her to one point,” Stockton said. “Definitely a job well down on defense. You cannot ask for anything better than that.”

“We definitely want to keep Kennett on our schedule every year moving forward,” Stockton said. “They are right down the road and are always going to have a competitive team that is well-coached. Coach New is a great coach. Playing Kennett gets us ready for district play for sure.”