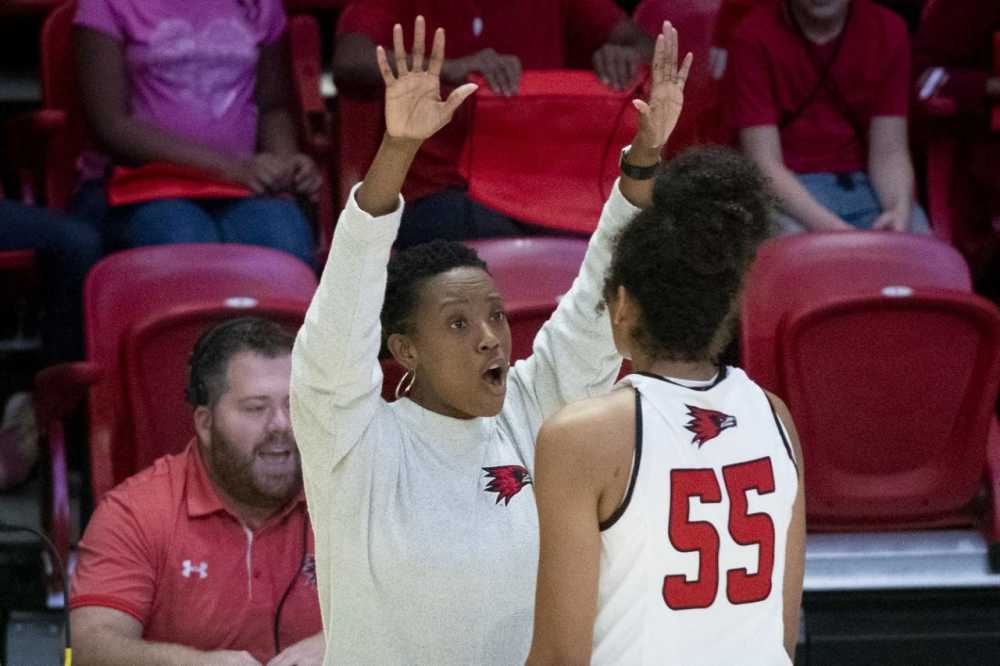 Southeast, the highest scoring team in the Ohio Valley Conference to-date, finished off a four-game homestand with a convincing 88-73 win over Murray State Saturday.

A tale of two halves

The second half was a different story as Southeast came out firing with a 19-0 run ñ and the Redhawks never trailed again.

Thompson hit two 3s and was perfect from the foul line, going 8-for-8.

ìTesia has been quietly working to get betterî at the charity stripe, added the fifth-year coach, whose overall record at Southeast improves to 66-69 with the win.

ìAll of our players have rotating partners,î said Patterson. ìWe challenge them (in their pairs) to make 400 free throws every week outside of practice.î

Southeast converted 20 freebies out of 23 opportunities against the Racers.

For the season, the Redhawks ñ winners of three straight - are shooting 71 percent from the charity stripe.

Shephard posted a double-double as she registered 10 assists for Southeast.

The redshirt senior from Steele, Mo. also had four steals to lead the Redhawks.

ìCarrie stole the ball early in the third quarter,î said Patterson, ìand that was a big momentum play for us.î

Also coming in for praise was sophomore Taelour Pruitt.

ìTaelour ran the point in the second half and was our on-court general.î

Southeast was sluggish in the first 20 minutes, shooting just 33 percent from the field.

After halftime, they shot 50 percent.

ìI reminded our young people (at halftime) that theyíre good,î said Patterson, deciding a carrot was needed in the locker room rather than a stick.

ìI challenged the ladies to be who they are at both ends of the court,î added Patterson, whose Redhawks are now fourth in the 12-team OVC.

With the win, Southeast avenges a 70-62 defeat to the Racers two weeks ago in Murray, Ky.

The Racers (8-9, 1-5, OVC) had three players in double figures ñ Turley, plus Alexis Burpo and Lex Mayes, with 20 and 13 points respectively.

The contest was notable for a series of runs.

Before the scoring spree by Southeast after halftime, the Redhawks opened the game by scoring 10 unanswered points. Murray State responded with an 8-0 run in the second quarter.

Two players fouled out for the Racers ñ Laci Hawthorne and Macie Gibson.

Patterson believes the Show Me Center crowd, announced at 823, was the sixth man for her team.

ìThe energy of the fans was great,î said Patterson, ìparticularly at the start of the third quarter.î

On the road again

The Redhawks now begin a four-game road trip that will take them to Illinois and Kentucky.

Patterson doesnít want her players to get too confident as they get on the bus next week.