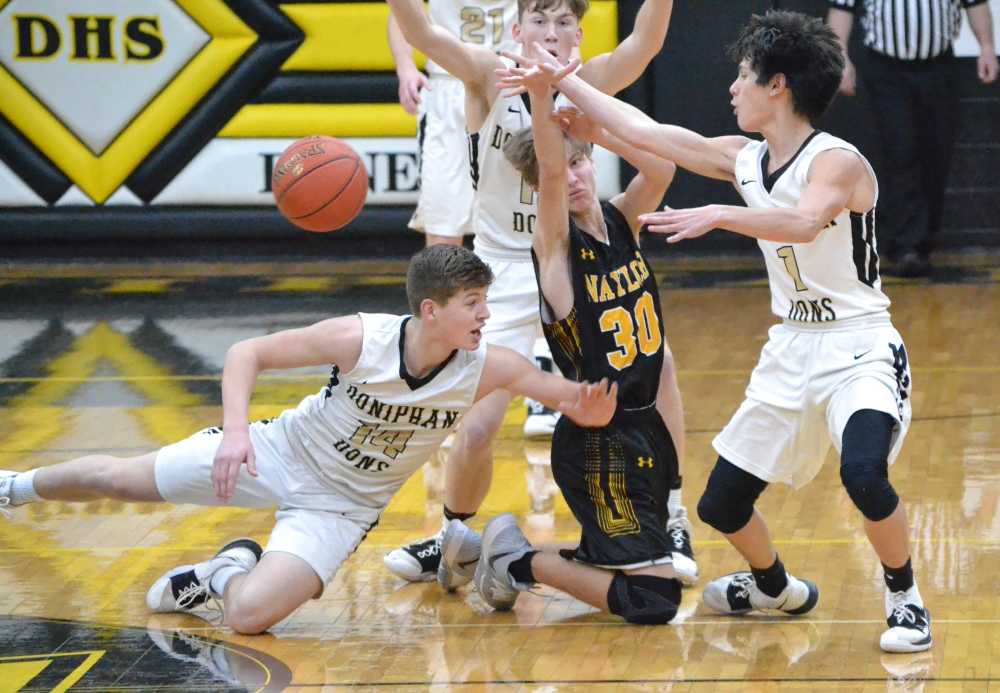 DONIPHAN - For a team averaging 49 points per game, the halftime scoreboard looked pretty good on homecoming night to the Doniphan Dons on the way to a 74-45 win over the Naylor Eagles.

Doniphan needed just 2-1/2 minutes to build an 11-0 lead behind three consecutive 3-pointers from Ethan Jones and Tristian Bryant. The Dons led 22-9 after one quarter and 44-21 by the half.

“We scored the ball really well tonight,” said Doniphan coach Daniel Cagle, whose team improved to 9-9 overall and 3-1 in the Ozark Foothills Conference. “That’s the first time we’ve went over 70 in a game this season.”

Naylor (7-6 overall and 0-2 in the conference) never went away against its Ripley County rival, outscoring the Dons 17-11 in the third quarter and getting back as close as 55-43 early in the final period on back-to-back threes from Wyatt Yarbrough.

“We struggled mightily in the first quarter and that’s what beat us,” said Naylor coach Chris Moody. “We didn’t give up and cut it to 11-12 but we couldn’t make enough shots and couldn’t make free throws.”

Doniphan’s best offensive run came following the opening tip. Owen put back a rebound for two and Jones followed with back-to-back threes. Bryant quickly made it three in a row from long distance and an 11-0 lead.

Rawlings netted the next six points for the Dons, including a pair of putbacks on missed 3s to push the lead to 17-3.

Doniphan connected on 17 of 30 shots in the first two quarters including seven 3-pointers.

“They were playing an extended zone and we were spreading out and moving the ball really well,” said Cagle.

Another three from Bryant opened up a 49-23 lead for the Dons early in the third quarter but a trapping Naylor defense sparked a 15-0 run for the Eagles including seven points on fast breaks by Schrimsher.

After dropping their conference opener before Christmas at home to East Carter, the Dons have rolled off three consecutive wins against OFC opponents.

“We’re 3-1 in the conference and feel like we have a good shot to win the regular season if we keep playing,” said Cagle. “Neelyville is the only unbeaten team and we haven’t played them yet.”

Doniphan will have a week off before traveling Friday to East Prairie.

Naylor returns to action against a fellow Class 1 school on Tuesday at Richland. The Eagles are 6-2 this season against Class 1 competition and 1-4 against larger schools.