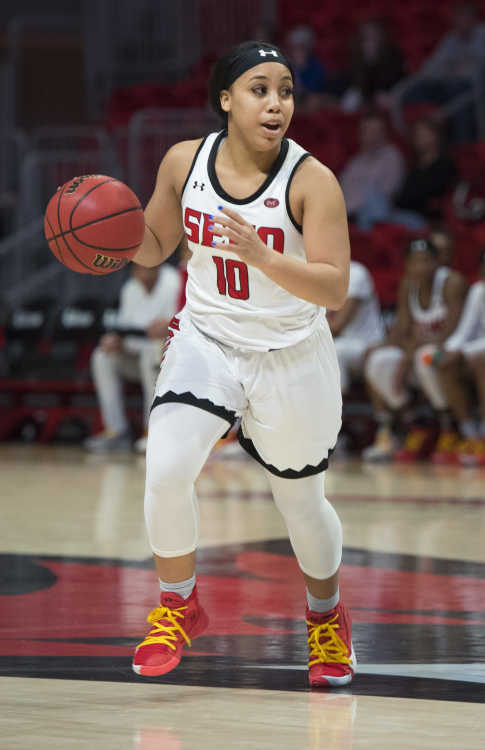 Southeast Missouri State sophomore Taelour Pruitt (10) handles the ball during an offensive play in the first half of a women's basketball game against the Harris-Stowe Hornets on Sunday, Dec. 29, 2019, at the Show Me Center in Cape Girardeau.
Ben Matthews ~ Southeast Missourian
Order this photo

Taelour Pruitt says Southeast’s 106-64 home win over Harris Stowe Sunday – the first time the Redhawks women eclipsed the century-mark in scoring this season – is about one thing for her.

Pruitt led all scorers with 21 points, including three from beyond the arc. She also logged the most minutes with 29.

“I think this (win) is a good way to end 2019 and the decade,” said Pruitt, a native of Arlington, Texas. “We can roll into conference play with a little confidence.”

Fifth-year coach Rekha Patterson was effusive in praise for the sophomore.

“Taelour hadn’t been shooting the ball great,” said Patterson, “so what I really liked about her scoring (today) are her percentages.”

Pruitt was perfect on all three 3-point attempts and in both her shots from the foul line.

“(Taelour) gives us another scoring punch,” said Patterson, “so Carrie (Shephard) and Tesia (Thompson) don’t have to carry so much of the load all the time.”

Thompson and Shephard continue to produce impressive offense for the 8-3 Redhawks.

Thompson, a junior, finished with 18 points, including 3 3s and shot a masterful 11-for-12 from the charity stripe.

Shephard, the 25-year old reshirt senior, finished with 17, including going 5-for-8 from three-point land.

One other Redhawk finished in double figures, as senior Jocelyn Taylor logged a dozen points.

Patterson ticked off all the reasons she liked the win – which went beyond the inflated score.

“We had 51 rebounds, 23 assists, we were 77 percent from the foul line,” said Patterson, “and I liked the way we started the game and the second half.”

Southeast came out fast – building a 36-9 lead in the first quarter, including a 13-0 run.

What was not so impressive is the sluggish way the Redhawks finished the first 20 minutes of play.

“We finished poorly in the second quarter,” noting the Hornets (1-10) had a 12-0 run going into intermission.

“(But) it’s a game of runs,” said Patterson. “How you respond to runs really matters. We’ve got a mature group who knows what to do.”

The Redhawks had an eight-day break which spanned Christmas. Sometimes a team can come out sluggish after a break for the holiday.

“That’s why you schedule a game before (Ohio Valley) conference play starts,” said Patterson. “We have a drill to overcome (early lulls). We got it from Mississippi State and it emphasizes playing fast the first four minutes of every game.”

On an “inferior” opponent

Harris Stowe has a first-year coach in Seth McDowell and has lost eight straight and hasn’t posted a victory in over a month.

“We respect every opponent,” insisted Patterson. “We didn’t talk about (Harris Stowe’s) record. We talked about how we beat them 80-65 last season and how they outscored us in the third and fourth quarters.”

“All a team needs is one night to get hot.”

What needs to improve

“We have to work on defending the three,” said Pruitt. “We give too many teams open looks.”

“We will clearly have to adjust some of our drills,” said Patterson, whose overall record at Southeast is now 63-68.

“As we get into conference play (starting Thursday), we’re going to play a team (Austin Peay) that shoots 3s just as well, if not better, than Western Illinois.”

Two weeks ago in Macomb, Illinois, the Leathernecks blistered Southeast with 17 3s enroute to a 97-91 victory, the Redhawks only loss in their last five outings.

The Redhawks begin Ohio Valley Conference play with two games on the road – Thursday at Austin Peay and Saturday at Murray State. Southeast has been picked to finish 6th in the conference this season.

“Nothing we’ve done up to now is going to matter (starting) Thursday,” said Patterson. “We split with Austin Peay last year (and) it’s my fifth season and we’ve only beaten them twice, both times at home.”

A newly confident Pruitt has the last word.

“Thursday is our first chance to send a message to the OVC about what we can do.”