SEMO basketball plan is to 'keep it simple' with its play 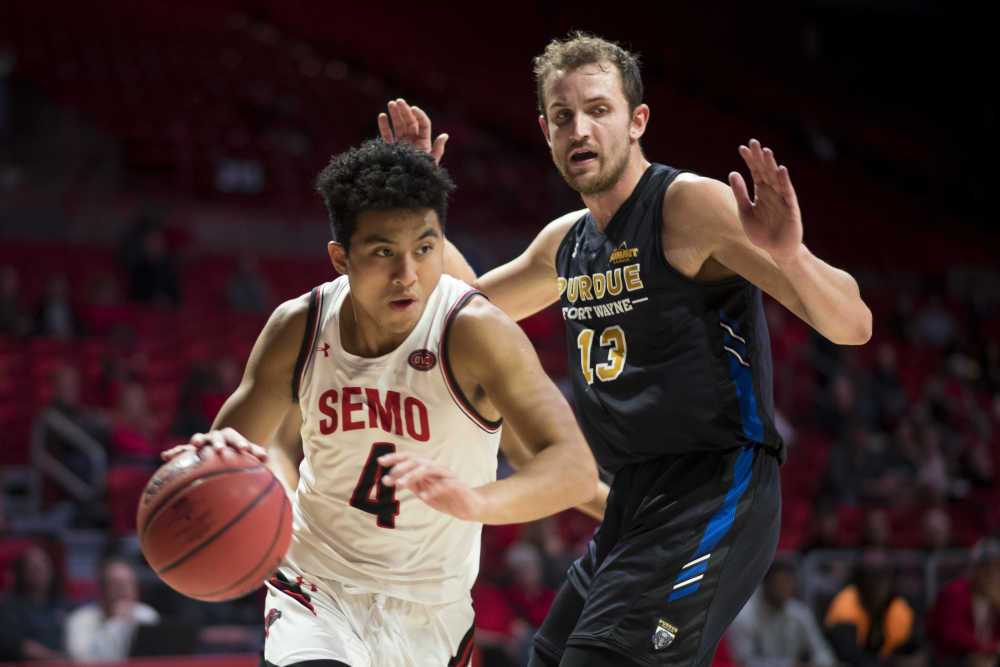 The Southeast Missouri State men’s basketball team did a lot of things well in its recent outing, a 78-73 loss at Drake, which is a Missouri Valley Conference program that is currently 8-2.

The Redhawks limited the Bulldogs to 26.1 percent shooting from beyond the arc, and Southeast outrebounded Drake 36-29.

However, the Redhawks turned the ball over 18 times and allowed the hosts to generate 14 more points off of those turnovers than Southeast did.

The Redhawks (3-6) will travel to Youngstown State (5-5) today at 7 p.m. and taking care of the ball is on the minds of every Southeast player and coach.

Of the 353 NCAA Division I programs, only 11 are passing for made baskets fewer times than the Redhawks have done so far this season.

Just 13 teams have a worse assist-to-turnover ratio, and 274 teams across the country turn the ball over fewer times each game than the Redhawks.

Each of those numbers helps answer why Southeast has already lost four games by single digits.

Those numbers are precisely why Ray had his players running sprints intermittently during Friday’s practice when they would turn the ball over.

“It is two-fold,” Ray explained of his discipline. “It is holding guys accountable, making it miserable for them, as a team, when we don’t take care of the basketball. Not just individually.

“But also, now having enough of sample size (in nine games) to define roles.”

Ray’s emphasis has been to have the athletes understand what NOT to do with the basketball, as much as it is for them to know what TO do with it.

“You don’t want to handcuff guys,” Ray explained. “But guys have to understand what their limitations are, what are their roles?”

Aside from junior guard Oscar Kao, there is not a single Redhawk player with a positive assist-to-turnover number. So no one is immune to the instruction.

Southeast is averaging a measly 9.5 assists per game while turning it over 15 times per game.

Drake scored 25 points off of turnovers against the Redhawks.

“We’re never going to go through a game with zero turnovers,” Ray said. “But we need to cut that 25 points in half and give ourselves a chance.

“That is like starting a game and just putting up a 25-0 on the scoreboard to start.”

Sophomore point guard Alex Caldwell (19-to-20) is close to being positive in this statistical area (19-to-20 for the season), but against Drake, he threw the ball away six times while passing for only one assist.

Freshman guard DQ Nicholas was recently named as the Ohio Valley Conference Co-Freshman of the Week, and he has made strides in his decision making. Last week, he dished out five assists and only turned it over four times in a pair of games. However, he is still on the wrong side of the ledger (14-to-20).

Sophomore forward Sage Tolbert struggled mightily as a freshman in this area. He averaged one turnover every 9.73 minutes, but he has improved slightly this season.

Tolbert is throwing the ball away just once every 11.35 minutes so far.

“Guys need to understand,” Ray said, “at this level, some of the things they are trying to do, they just can’t do. We just need to be simple.

“When somebody comes over to help (on defense), instead of trying to split the defense or make a change in direction with your dribble, just pick the ball up and pass it.”