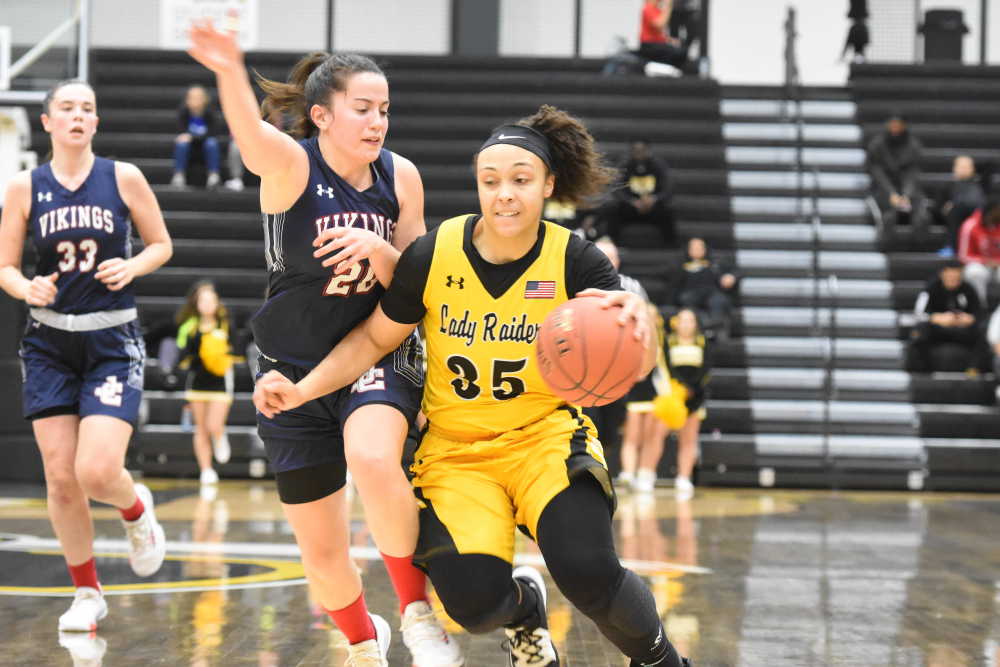 Three Rivers had a similar start, but a different finish.

The Raiders suffered a poor first quarter for the second night in a row. In a loss to Moberly Area on Friday, they never retook the lead after giving up a 17-1 run. On Saturday, they allowed a 16-2 run in the final 6 minutes of the first quarter to Jefferson but rallied to win 75-63 in the Region XVI Showdown in the Libla Family Sports Complex.

"We came out motivated from last night's loss. We know we should have played better. We just kept our composure," Three Rivers' Chaylea Mosby said.

The Raiders (9-3) were up by seven before Jefferson's run in the first quarter and down by seven after it.

However, they opened the second quarter with eight straight points and retook the lead on Chaylea Mosby's 3.

There were four more lead changes and two ties in a back and forth second quarter.

With a minute left, Jordan Little dribbled baseline for a go-ahead layup and Mosby added a free throw to put Three Rivers ahead 35-32 at halftime.

"Tonight we handled it a bit better because we scored 23 points in the second quarter. That's the big difference from last night. We came back and responded like we should have," Three Rivers coach Jeff Walk said.

The Raiders had just two offensive rebounds in the first half but finished with 16.

"We went in the locker room and the coaches talked to us and we just came out with a different mindset," Mosby said.

Hannah Thurmon, who led the Raiders with 15 points, kickstarted a big run for the Raiders to start the second half.

She made back-to-back 3s to open the third quarter and added one more that gave Three Rivers a 12-point lead.

The Raiders kept going for a 15-2 run over the first six minutes of the second half to go ahead by 16 points.

"We know that everybody who we play is going to come at us strong. We were just more prepared for it today," said Three Rivers' Jordan Little, who finished with 14 points.

The Raiders took nearly half of all their shots from beyond the arc and finished 11 for 36 (31%) on 3-pointers.

"There was about three in the last four minutes of the game we probably shouldn't have shot," Walk said. "We need to pump fake and get to the rim and get three points the old fashioned way."

Tyra Brown led Jefferson with 22 points and Katerina Patkova had 10.

Saturday was the fifth straight loss for the Vikings, who are 1-3 in the Showdown and will play Moberly Area on Sunday.

The Raiders, who are 2-2 in the Showdown conclude their schedule against State Fair at 5 p.m. Sunday.