Christmas is coming early for Raider fans with five Three Rivers games this weekend, four of them at the Libla Family Sports Complex.

The 7-5 men host MSU-West Plains (6-7) at 7 p.m. Saturday before heading to St. Louis Community College for the St. Louis Shootout, where they will play Southwestern Illinois College (4-3) at 4 p.m. Sunday The matchup against the Grizzlies will not count against the Region XVI standings.

The 8-2 women are hosting the second part of the 2019 Region XVI Showdown, which also does not count against the Region XVI standings.

“We had two good days of practice to get ready for this weekend, and will just try to continue what we started on Sunday,” Three Rivers coach Jeff Walk said.

If the first part of the Showdown, which was held Nov. 22-23 in Sedalia, Mo., was any indication, the weekend games should be competitive and intense.

Three Rivers is currently 1-1 in the Showdown after losing to Mineral Area 61-60 and beating Crowder 89-61.

The women will play Moberly Area (9-2) at 7 p.m. Friday, followed by Jefferson (6-6) at 5 p.m. Saturday and State Fair (5-8) at 5 p.m. Sunday. It is the first time under Walk that the women will play three games in three days. With the women having the goal of getting back to the national tournament, three games in three days replicate the schedule they would potentially face come March. 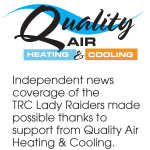 “We’ve been preaching to them, get plenty of fluids, eat a bunch, salt intake, and rest when you aren’t practicing. We run a lot so our bench is going to have to be ready to go,” Walk said. “That third game, honestly I don’t know. It will be new for me.

“It’s going to be a pretty neat event.”

The men’s team will follow the women’s game on Saturday in a December doubleheader.

Following this weekend, the women will have just one more home game over the next month, Dec. 12 against Lindenwood-Belleville JV.

The next chance to see them play Region XVI competition at the Libla won’t be until Jan. 25 when Moberly Area comes to town.

The men, meanwhile, will finish the first semester at home with games against North Arkansas College at 7 p.m., Dec. 12 — another home doubleheader — and against John A. Logan at 7 p.m. Dec. 16.

The men will also start the Region XVI season on the road and won’t host a region game until that Jan. 25 doubleheader against Moberly Area.

The men can expect to face plenty of 3-point attempts this weekend, with both MSU-West Plains and Southwestern Illinois attempting close to 23 per game, with their scoring leaders both leading the team in 3s.

Sophomore Sardaar Calhoun leads MSU-West Plains with 21.5 points per game after making 43.8% of his 8.6 3-point attempts per game. Beyond the arc alone, he’s averaging nearly 12 points per game and is also making 87% of his free throws and 45.2% of all his shots.

Taevon Horton, Quentin Jones and Alex Peterson, all sophomores, are scoring between 12-13 points. Horton and Jones are making a 3-pointer or two per game while Peterson, a 6-foot-7 forward, plays inside and leads the team with 6.6 rebounds.

The Grizzlies are seventh in the country with only 10 turnovers per game.

Charles Jones leads Southwestern Illinois with 13.9 points and is making a team-high 1.6 3-pointers per game, but is a 58.8% free-throw shooter.

For the women, DeAnna Wilson leads Moberly Area with 16.7 points. The freshman forward is shooting 59.2% from the field and is nearly averaging a double-double with 9.5 rebounds.

Chatori Tyler is Moberly Area’s primary outside shooter and is taking 7.3 3-pointers per game for 10.5 points.

The pair are primarily inside scorers, though Thorman-McKey is attempting 1.8 3-pointers per game.

State Fair as a team is also shooting 57.6% on free throws and attempting 24.3 per game. The Roadrunners are 18th nationally in free-throw attempts per game, but 45th in made free throws. They are also 11th in offensive rebounds (19.1) but 85th in rebound margin (6.7).