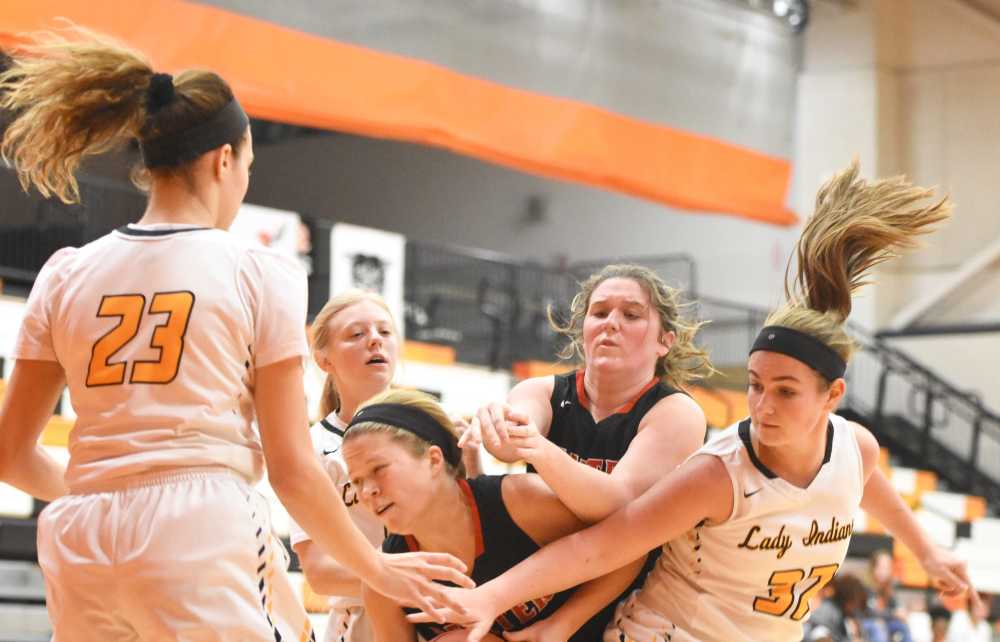 CAPE GIRARDEAU — The Dexter Bearcats must do three things better if they want to find success this season.

The Bearcats’ struggles in those three areas cost them in the seventh-place game of the SEMO Conference Girls Basketball Tournament on Thursday at Cape Central High School.

The eighth-seeded Indians rallied in the third quarter to beat the seventh seed 40-32.

First-year head coach Eric Sitze said the Bearcats must cut down on turnovers, play with better effort and fight more for rebounds and loose balls.

“It’s not a hard equation. It’s hard, I guess, to do,” Sitze said. “They’re young. They have to understand it takes hard work to play at this level.”

Sitze said the Bearcats committed more than 30 turnovers and let up effort-wise in their third loss in three games this season.

For the Indians, first-year coach Aaron New said their win can be attributed to Wednesday’s practice, a day after Sikeston beat them 50-26 in the consolation semifinals.

“It was absolutely the best practice we’ve had,” New said. “We played terrible in the second half against Sikeston. It would’ve been real easy for the girls to come to practice the next day and not practice hard. … I’m so proud for my girls that they got rewarded for a good practice and they played their best game of the year.”

The Indians (2-2) trailed 20-15 at halftime but scored the first five points of the third quarter to tie the score. Dexter missed its first six shots, made only 2 of 8 attempts from inside the arc and missed all four 3-point tries in the third.

A basket inside by Taleigh Harrell, who scored a game-high 16 points, tied the game at 20, but the Indians were unable to take the lead at that point.

Dulcie Pullen, who led Dexter with eight points, converted a Kennett turnover into a fast-break layup with 4:20 to go in the third, re-establishing the Bearcats’ lead.

However, Harrell scored inside to tie the score and Mallory Morrow’s 3-pointer gave the Indians a 25-22 advantage and they never trailed again.

In the quarter’s closing seconds, the Indians beat Dexter’s full-court pressure with four passes downcourt that culminated with a layup by Harrell for a 28-24 lead entering the final quarter.

The Indians extended their lead to eight points with a layup by Caroline Patton, who finished with 14 points, and two by Harrell before Dexter rallied to trim its deficit to 32-29 with 3:40 to play.

Pullen scored on a putback after the Bearcats missed their first six shots of the fourth, and Mikayla Dodson followed with a 3-pointer.

However, Harrell scored back-to-back baskets to push her team’s lead to 36-29, and the Bearcats never came closer than six points the rest of the way.

“We came out and pressed a little in the second half,” New said. “It was the first time we put our press in (a game) all year long. We got a few buckets there at the start of the second half and got a little bit more energy than we did in the first half.”

The Bearcats led for almost all of the first half. Kennett held brief leads of 1-0 and 5-3 and the score was tied three times.

Karlee Keirsey and Rachel Cobb made first-quarter 3-pointers, and the Bearcats took a 10-5 lead into the second.

The Indians scored six straight points to tie the game at 12 in the second. Sydney Asberry scored on a driving layup and sank a 3-pointer, Giles made a free throw and Alexa Werneck scored on a putback to give the Bearcats a five-point halftime lead.

Werneck finished with seven points and Asberry had five.